A Witness to History: Discovery Edition 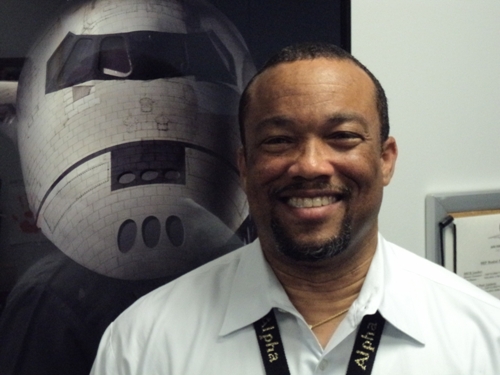 When I first heard last month the Space Shuttle Discovery was going to be making its final voyage on top of the NASA B747, and landing at Washington Dulles International Airport (IAD) on April 17th, I quickly e-mailed my Family, Coworkers, and friends.  You see I am an aviation nut, geek, etc., so this was a big deal for me to be able to witness this historic flight, landing right here where I work.  And to top it off, it is Dulles’ 50th anniversary. Besides, when would I ever see this again?

It was a beautiful Spring morning on April 17. As I came into work around 7:15 a.m., I could see the anticipation of the Space Shuttle Discovery’s arrival from the traffic signs on the highway leading to the airport, warning of delays due to the event.  Media trucks were on airport property, and people with their cameras and tripods were already on the top floor of the parking garages, primed to get a great view.  Discovery, atop the B747, was scheduled to do a low approach flyby at 10:00 a.m., and then land on Runway 1R at 10:45 a.m.

Around 9:00 a.m., I started receiving calls from Coworkers asking where the best place would be to see the flyby. At 9:30 a.m., I called CSS Linda Brown several of my Coworkers and asked them if they wanted to ride out with me, near the taxi area, to watch the space shuttle flyby. They were so honored, and thrilled as I was, to be part of history.  All three of us were waiting for a 752 (Boeing 757-200) to taxi in front of us so I could drive across the taxi way, when another driver (perpendicular) to my right was pointing for us to look to our left.  When we looked to our left, there it was; the 747 with Discovery anchored, flying its low approach over runway 1R, fifteen minutes ahead of schedule. Well we weren’t going to miss the landing, so I drove over to the taxi-way area for 1R, and could not believe all of the airport employees who were out there waiting to see the massive shuttle atop NASA's jet.

We heard the 747/Discovery was going to do another low approach flyby due to the number of people watching at IAD (an airport Customer Service Manager later told me there were 1,000 people in the airport operations area and about 2,000 people surrounding the airport). It felt like a tailgate party at a major rivalry football game, except there was no food or beverages, and most people were wearing safety vests.  About 35 minutes later, the 747/Discovery did make another low approach flyby and it was spectacular. There was applause from the people and sounds of pictures being taken. I and everyone else was in awe to see this aircraft flying.

About 25 minutes later, after circling the D.C. area again, the 747 with Discovery on top made the landing on 1R and we could all see this phenomenon of an aircraft.  The 747/Discovery then taxied in between the B Terminal and the main terminal.  It stopped in front of the old control tower while a low helicopter slowly circled it, presumably taking momentous photographs. 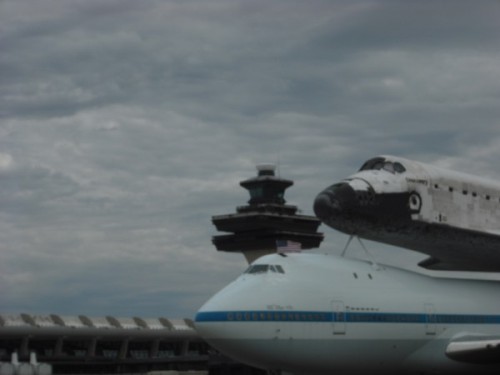 The 747/Discovery made such an impression. Thousands of people saw it flying overhead in the Washington, D.C. area and it captured the attention of the local and national media.  It reminded me of when we had the earthquake here in 2011.  People were saying, “Did you feel the earthquake?”  On April 17th, people were instead asking, “Did you see the space shuttle?”  Fortunately, most of my Family, Coworkers, and friends were able to witness this historic moment. 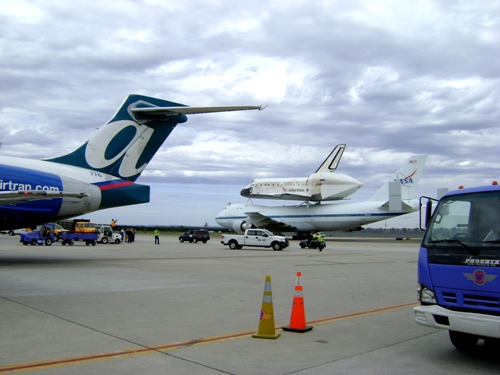 Writing my college research paper on the NASA Space Shuttle program in the early 80s: laborious. 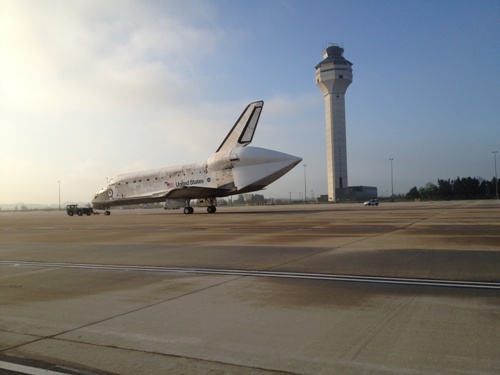 Seeing the Discovery Shuttle on top of a NASA 747 at IAD, where I work for Southwest Airlines: PRICELESS!

kelly_richardso
Not applicable
E this is awesome, I'm glad you were able to experience this.
14 Loves

helen
Not applicable
how did they take the shuttle off the big plane?
29 Loves

Bob_Flores
Not applicable
Thanks for sharing your wonderful story. On the West Coast the morning news in the San Francisco Bay Area, showed the first fly by and then the landing. they did tight shots so we didn't know how big a story it was locally. Now I know. Thanks again.
13 Loves

Bryant_Qualls
Not applicable
I'm an aviation, space, car and everything transportation geek too. I've watched these shuttles lift off and recover since I was a young teenager. When it flew directly over me near my Alexandria, Virginia home last week; priceless!
29 Loves

David_A__Forris
Not applicable
That was BEAUTIFUL! I felt like I was standing next to you the whole time and we came away with the same piece of history embedded into my soul. Thank you! P.S. keep it coming!
17 Loves

Brian_Satterlee
Not applicable
Nice photos, wish I was there. I saw two takeoffs when I was in Florida and it was just awesome. Too bad it's over.
12 Loves