On a daily basis, we get great stories from Employees and Customers all about what's going on around our system. I take pride in all of the content that gets published on Nuts, and the great team we have. Truly, without a great Culture embraced by great Employees, Nuts About Southwest wouldn't be very interesting at all.

The following story originally appeared on Jay Baer's Convince and Convert blog. It embodies the standard by which all our Employees are encouraged to operate. It also has the very convenient side-effect of making my job really easy. It's very satisfying to read about Becky, but also to know Jay's story about her is one of thousands that happen faster than I can keep up.  Thank you to Becky for being so great, and Jay, too, for sharing this story. Your kind words go a much greater distance than even our longest flight.

Social is About Actions Not Words
by Jay Baer

I cried a little on a plane last week.

It wasn’t due to a delay, an uncomfortable seat, or peanut salt getting in my eye. It was because I saw a shining example of “social business” at work in the real world.

Mid-way on a Southwest Airlines flight home from a speaking engagement in Ft. Lauderdale, I looked up from my laptop to find Becky the flight attendant standing at the front of plane with a boy of about 9.

“Ladies and gentlemen, I’m sorry to disturb you, but I just thought you should know that we have a celebrity on the plane today. Well, perhaps not a celebrity today, but someday this young man will be a famous artist. Abraham has drawn us a marvelous picture. It’s quite wonderful, and I’ll be displaying it up here so we all can enjoy his great picture.” 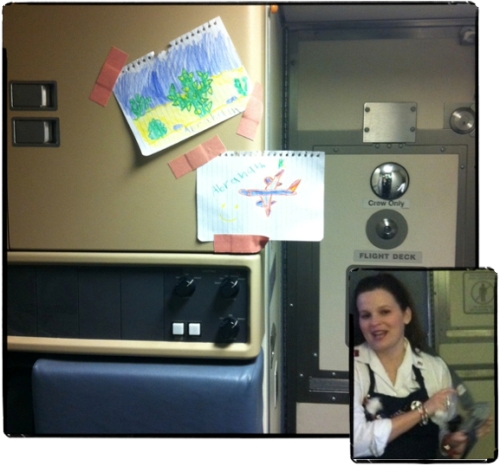 The kid was absolutely BEAMING with pride and accomplishment and happiness and honor. Abraham returned to his seat. Becky broke out the medical kit, ripped open a band-aid and used it as ersatz tape to post the picture on the wall.

A few minutes later, Abraham was back with a second picture. A landscape this time, Becky again made an announcement and grabbed another band-aid.

Social business isn’t about tools and technology. It’s about giving Becky the freedom to work off-script. It’s about cultural DNA that values moments of delight. It’s about treating customers as humans, not transactions. It’s about winning hearts and minds one planeload at a time with a personal, shared experience.

And it’s about building loyalty and triggering word-of-mouth by doing it well. Will Abraham’s parents ever fly any other airline? Will he? Will I? Or you?

For companies that are social at their core, social media just lets the rich get richer. For companies that don’t truly believe in the primacy of the customer, all the Twitter and Facebook and blogs and YouTube in the world won’t change their fortunes.

Social is foremost a philosophy, not a set of behaviors. And actions speak louder than words.

Jay_Baer
Not applicable
Brooks (and all the Southwest team), thanks so much for reposting my blog here on Nuts! It's an honor. I hope somebody can track down Becky and give her the pat on the back she deserves. Indeed, what makes you special - and an example of a modern, social business - is that Becky's actions do embody your standards across-the-board. I was going to give her a business card when I left the plane and tell her to watch for a blog post, but I figured she'd take me for a stalker! Incidentally, having Wi-Fi on that flight gave me the ability to real-time tweet and Facebook the tale, which was a lot of fun. More Wi-Fi please!
336 Loves

Kim_Phillips
Not applicable
I'm not surprised at all by this story. I fell ill on a flight from New Orleans to Nashville, by way of Birmingham, where I was taken off the plane in a wheelchair. Paramedics were called, and THREE Southwest gate employees stayed with me, including one who had just clocked out. She spent her personal time to sit with me, bring me water, and tend to me until the next flight, when I felt a little better and thought I could make it home. It's this kind of real, human caring that makes me love Southwest. My husband and I travel based on where Southwest flies; we only use another airline if there's no Southwest option for that destination. You must treat your employees well, and they in turn, treat customers well. SWA is the BEST.
334 Loves