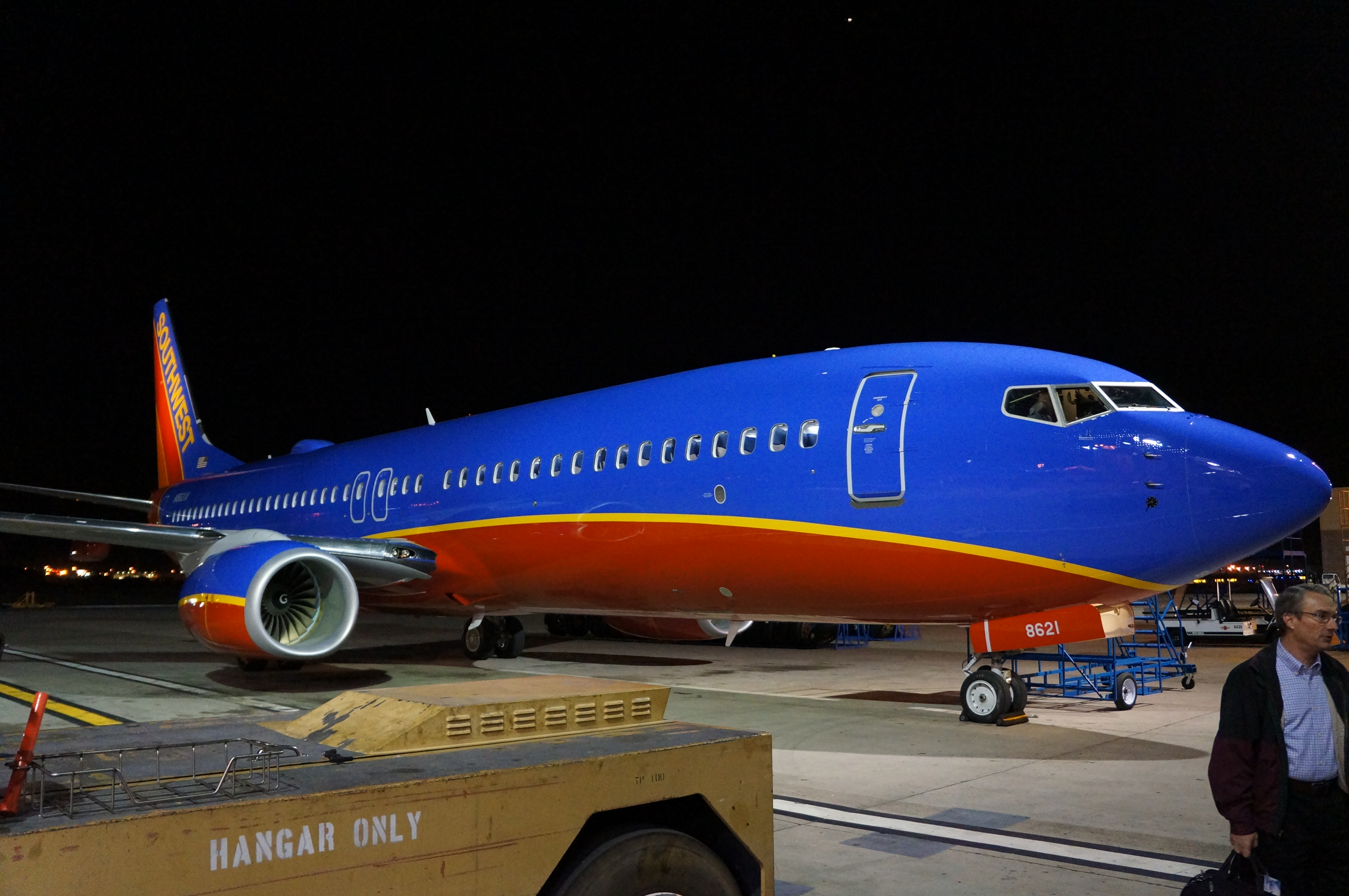 There’s nothing like the smell of “new”—new houses, new cars, and of course, new airplanes! I was recently able to join two dozen of my Southwest Family Members in picking up one of our brand-new 737-800s from our friends and partners at Boeing.   It was one of the most exciting and FUN experiences of my 35 years in this industry! There’s more to picking up one of these amazing machines than you would imagine, and it winds up being much more like closing on a house than buying a new car.  Just as you don’t close on a house from your new home’s living room, you don’t close on a new airplane from inside the cabin.  Closing is done in a conference room at a Boeing office building at Boeing Field, with representatives from Southwest and Boeing in attendance and others such as lenders (akin to “mortgage companies” in my home buying analogy), FAA representatives, and other interested parties on conference call.   And after a signature or several, the call is over, and the airplane is Southwest’s. Birth of a Southwest Boeing 737 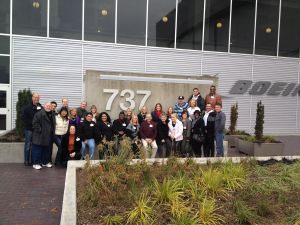 The whole process begins where all 737s are built—the Boeing plant in Renton, Washington.  Located a few miles east of Sea/Tac International Airport on the southern shore of Lake Washington, it is here that every Boeing 737 that has ever flown was “born.”   While Boeing’s Renton plant has been producing 737s since 1967, the plant has been thoroughly modernized and isn’t anything like the plant where the first Boeing 737-100 came off the line.  Today, Boeing’s Renton plant is a marvel of industrial engineering, carefully designed to facilitate communication and collaboration.  You could say it’s efficient to the MAX.  (Sorry, couldn’t resist!) Ever wonder how a Boeing 737 becomes a Southwest LUV Jet?  The airplane is built and tested to be air-worthy at Renton, but it’s still not painted, nor does it have our Evolve seats or WiFi installed.  For these final touches, the aircraft is ferried from the Renton plant up to Paine Field in Everett, Washington, about 40 miles north of Seattle, for final make-ready.  (Side note:  While some planes go to a facility near Spokane for paint, they still wind up in Everett for the remainder of the make-ready process.)   It is at this facility that of our long-time partner, ATS, outfits the basic 737 into a Southwest red-bellied LUV-jet inside and out. 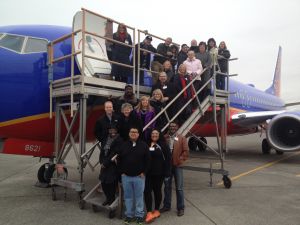 When our brand-new airplane is ready for delivery, the Flight Crew for the delivery flight and anyone else invited to be on the flight arrives and is cleared through the Southwest Airlines office at the hangar.  Flight plans are filed, bags are collected, and then it’s time to walk through the hangar to the new aircraft.  Through the doors, onto the ramp, and then you see her. Of course, we’ve all seen Southwest 737s a million times—it’s our livelihood.   But when you’re on a delivery flight, it’s different.  It’s brand new.  It’s shiny.  And most important, she’s “your” airplane.  I have to admit, as I finally walked out into the freezing cold wind and saw N8621A, it took my breath away.  After lots of pictures, I climbed the stairs and got inside into the toasty warmth of the cabin.  And I breathed deep, closed my eyes for a second, and enjoyed that “new airplane” smell.  It smelled of new leather, new carpet, new fixtures, pride of production, and most definitely pride of ownership.  In my mind I could envision all the men and women I saw working on the production floor at Renton building this ship with dedication and pride, and I could feel their handprints on the “soul” of this aircraft.  I really could! 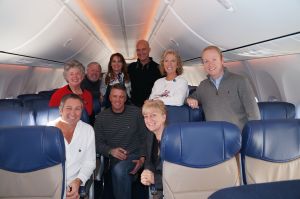 Then I opened my eyes and everyone got back to the business of the flight.  Walk around completed, doors shut, airstairs removed, briefings done, engines started … we’re good to go.  Takeoff was quick and normal—if you can call takeoff past a lineup of brand-new 747-8s, 787s, 777-300s in liveries from all over the planet normal!  (I couldn’t help but think “you may be global, planes, but only WE are SOUTHWEST!”)  But once airborne, it was time to get busy.  This was, after all, a celebration! 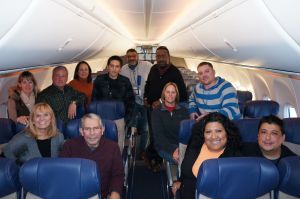 In addition to Companywide Culture Committee (CCC) Team Captains and Members, we were hosting folks who won Boeing delivery trips at the 2013 Messages To The Field, so we made sure they all had a GREAT time.  Thanks to one of my fellow 2012 CCC Team Captains, I had a blast learning how the cabin lighting system works on the amazing “Sky Interior” of our -800s—I think I’m partial to the “sunrise/sunset” setting, but I’ll defer to our Flight Attendants on that one.  The feel of this delivery flight was festive, from the delicious cheese-and-caramel mixed popcorn from Clark’s in Chicago that fellow-Team-Captain Bob brought, to the “stupid-joke-a-thon” and Holiday song sing-along we did via the PA system.  This was celebrating at 41,000 feet, SWA Family style!  Funny jokes, wonderful conversations, and one world-class sunset—two and a half  hours passed like no time at all.  Like most -800 deliveries, ours went to PHX Maintenance, and after an all-too-quick flight, we touched down and taxied to the ramp in front of PHX MX. And then it was over.  We gathered our things, climbed down the stairs, and then went on our way.  N8621A was ready to be prepped to enter revenue service the next day, and we all started to make our way back home, whether it was getting on airplanes heading West or East—or just getting in a car and driving to our digs somewhere in the Valley of the Sun. Next time you get on a brand new airplane, take a second to enjoy the smell.  And by all means take a second to think about the wonderful people at the Boeing Commercial Airplane Company that built the airplane with tremendous pride and LUV, as if their own families were going to live on that ship.  And if you’re on N8621A—think about the LUV and “good karma” those of us on the delivery flight left on that aircraft. AND DON’T MAKE A MESS ON “MY” AIRPLANE!
7 Loves
1 Comment

ashleynicoleoh
Not applicable
The new plane looks awesome. I fly Southwest everywhere, I'm sure I'll be on it soon enough! Congrats Southwest!
0 Loves