All for LUV: The Flight Attendant Trio 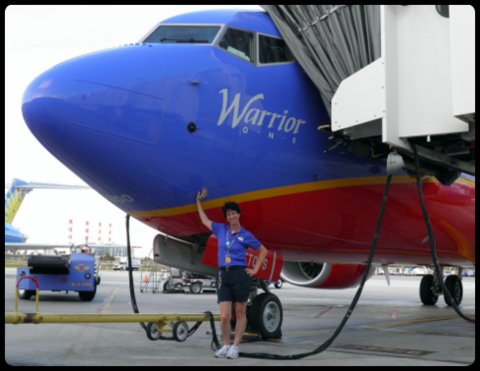 Southwest Airlines is known for many great things, and our Flight Attendants would be one of them. I recently took a flight and captured an awesome trio that illustrates just how great our Crews are.

The FUN started shortly after we took off from FLL.  A Customer was having a birthday, so the Flight Attendants (Lori, Tina, and Karin, pictured above) made him a crown, and crooned Happy Birthday to him.

Lori, Tina, and Karin didn't stop there.  They also took such great care of a little baby who had an ear ache, in between pausing in the cabin simply to speak with Customers.

They wrapped up the flight with a landing song upon arrival in HOU.

I had to deplane in HOU to connect another flight, but I didn't want to leave--thanks to Lori, Tina, and Karin.  Their smiles were contageous, their service was excellent, and they captivated all their Customers.  That bunch just so happened to include me, an observant Southwest Employee in plain clothes, who doesn't have to look far to discover another great example of why I love to work here.

A huge thank you to every one of our Crew Members who fly each day and do it ALL for LUV!