One of my favorite things about working at Southwest is the many fun stories shared when you tell people you work for Southwest. Isn’t it just the best?! It always makes me proud to hear how our Company makes such a positive impact on people by connecting them to what’s important in their lives!  This is one such story. As we are enjoying our own traditions this holiday season, check out how this “A-List Tradition” by guest blogger and Southwest Airlines Companion Gretchen Sakkinenhas created lasting holiday memories. --Ana Schwager, Southwest Airlines Community Affairs & Grassroots Regional Leader

Getting Kenny Chesney’s latest single to #1 on the charts?  Of course that’s something to celebrate.  But achieving Southwest Airlines’ A-List Preferred status and earning a Companion Pass for your spouse?  That glory is hard to beat.

One of my dearest friends, Stephanie, and I are both married to “promo guys.”  Our husbands, Chuck and Shane, both work in the country music industry, and their bottomline job is to get their artists’ songs played on the radio.  They share a few common traits with other record reps:

Our guys spend a great deal of time criss-crossing the country, attending concerts and building relationships with radio programmers and DJs.  As frequent fliers, they have travel down to a science.  They know how early to get to the airport, which security line moves the fastest, and which restaurant has the best breakfast burrito. Given the choice to any destination, they always fly Southwest Airlines.

Around the beginning of November each year, Shane and Chuck start assessing their status to make sure they’re on target to earn A-List Preferred and Companion Passes.  In case there is any question about crossing those two finish lines, the four of us start planning one last trip of the year — but this one is for fun, not business. 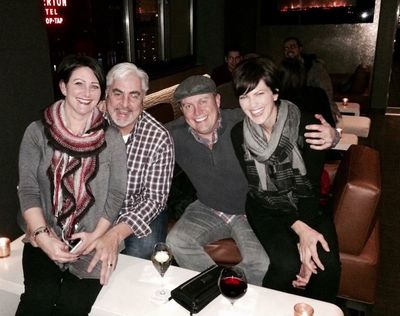 Our travel tradition started a few years ago.  In December 2014, we hit Chicago.  We drank wine at a rooftop bar, devoured steaks at Chicago Cut, and browsed shops along the Magnificent Mile.  In December 2015, Charleston was our destination, where we dined at Fig, shopped up and down King Street, and took in history on a downtown walking tour.

This year, in December 2016, we’ll be exploring Savannah.  We’ll fly into Charleston again, then drive a couple of hours southwest.  Get it?  Southwest!  Our plans include fine dining at Elizabeth on 37th, a stroll through Forsyth Park, and a ghost tour via hearse.  Whatever it takes to earn those Southwest Rapid Rewards!

As for our December 2017 destination … who can say?  Any suggestions?  All we know is we’re looking forward to the trip and we’ll be flying Southwest to get us there!

Do I have to pay the annual fee. Before I use the card ?