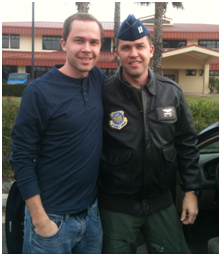 Since we were young, my twin brother Richard and I have always been fascinated by airplanes and aviation.  We were those kids who would get smacked in the head with a ball during an outdoor game of basketball because we were too busy observing the planes flying over head.  Fast forward many years and my twin and I can’t seem to shake the aviation bug.

Working for Southwest Airlines is one of the ways that I am able to cope with my love of flight.  For Richard though, his obsession was to be in the pilot seat, to which he currently pilots the C-5 Galaxy for the U.S. Air Force.   Although currently assigned to Travis Air Force Base in Northern California, Richard was required to spend a month at Lackland Air Force Base in San Antonio to do some mid air refueling exercises.

During one of his flights, the boom operator, who controls the refueling connection between aircrafts, advised him that he would be taking pictures of the exercise.  In a witty nod to his favorite airline, Richard cordially placed his opinion of our airline on the dash of his airplane. 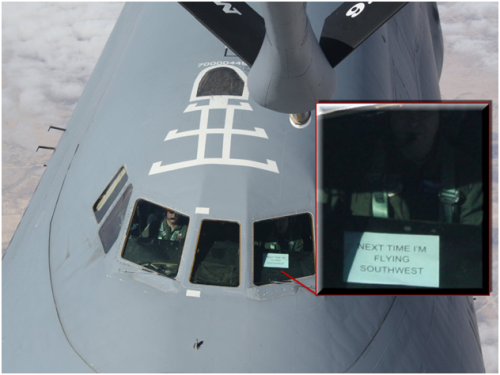