An All-Female Honor Flight Takes Off From Columbus 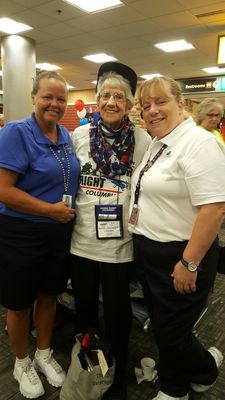 John Glenn Columbus International Airport had the incredible opportunity to honor a relatively under-recognized group of Veterans who have made unimaginable sacrifices in the service of our great nation—women.

Since 2008, Southwest has maintained a very special relationship with Honor Flight, a national non-profit organization that is dedicated to honoring U.S. Veterans. As the official commercial carrier of the Honor Flight Network, Southwest has donated thousands of tickets to the cause, helping to transport Veterans to see the nation’s memorials each year. This year, Southwest continues to help Honor Flight achieve their goals, including making this unique trip a reality. 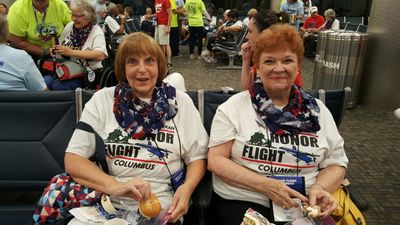 light from Columbus transported 81 women, including Veterans of World War II, the Korean War, and the Vietnam War, as well as their caretakers. I think I can speak for all of my fellow Teammates on that day, when I say that we felt privileged to play a role in honoring these brave women.

A large crowd was on-hand at the airport lobby to honor the Veterans. As they made their way through the airport to their gate, they received a hero’s send-off. There was a flurry of emotions as Veteran’s swapped stories and memories, took pictures, and chatted with Southwest Customer Service Agents, the Flight Crew, and other Customers who were in the gate area. 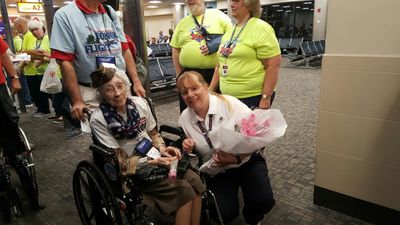 Margaret Switzer, stole the Hearts of her fellow Veterans and my Fellow Employees alike. Switzer, who is nearing her 100th birthday, was the oldest Veteran on the flight and served as a secretary during World War II. She arrived in the lobby, proudly wearing her Army cap like the badge of honor that it truly is. Other Veterans in attendance spoke of her as one-of-many trailblazers who made the opportunities for women in the military what they are today.

While boarding, we presented each Veteran with a special pink rose and as they taxied to the runway, they were met with a ceremonial water arch.

The flight departed Columbus, making a stop at Arlington to visit the Women in Military Service for America Memorial. Upon their arrival, the group was greeted by retired Air Force Brig. Gen. Wilma L. Vaught, one of the most decorated women in U.S. military history. They were also treated to a special program and lunch. The group then flew on to the nation’s capital to visit various memorials including the Vietnam Women’s Memorial, where four of the Veterans who worked as nurses during the Vietnam War, were honored during a special flag presentation.

From pre-departure check-in, to wheels down upon their return to Columbus, the 81 women on Southwest Flight #8248 completed a roughly 17-hour trip. When they exited the plane, they were met by the cheers from a crowd of more than 800 people from the local community.

We want to say thank you to Honor Flight, to our Fellow Employees, and to the Columbus Community and volunteers for helping to make such a wonderful day celebrating the service of these brave women and of female Veterans everywhere possible. More importantly, to the Veterans of the first all-female Columbus Honor Flight, thank you for your service and for allowing the Southwest Family to be a part of your incredible story.

Thank you for sharing this beautiful story and for the generous gift you provide to Honor Flight. Even though I've worked in the travel industry for a long time, I was not familiar with their work.

What especially touched me about your blog was that Margaret Switzer had been a "secretary", a job that some public figures in the political arena seem to view with disdain. It's great that you were able to honor her and wonderful to see how proud she has remained of her own invaluable contributions to her country --  despite what some may consider her demeaning job.

Keep up the great work honoring women -- who, the Chinese like to say "hold up half the sky."

This is awesome, and really cool coming out of my home airport!