An Outsider's Tour of the Haunted Headquarters

Not applicable
I kind of felt like Charlie Bucket (Willy Wonka and the Chocolate Factory) a few weeks ago when I entered the @SouthwestAir Haunted Headquarters Twitter contest. The post asked folks to “tweet their Halloween costume” and place a hash tag #trickotweet in order to be considered.

I decided to post a photo of me dressed as Bob Ross (you know, the “Happy Little Trees” guy from the PBS show The Joy Of Painting). I thought “there’s no way I’m going to win, but maybe someone will get a chuckle out of it.” I mean, it’s kind of an obscure reference and the only thing separating me from being “business casual” is a brown wig and a paint palate. 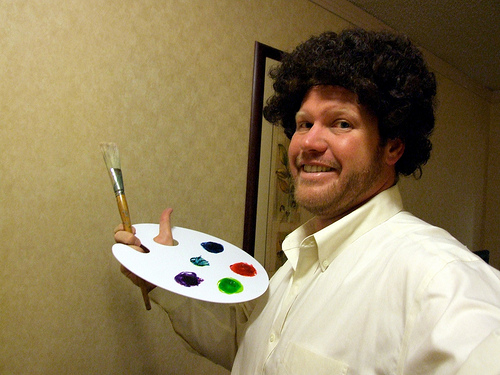 But, a few days later I learned that I got the Golden Ticket. Me, and four others, were given a pair of tickets to fly to Dallas, two nights hotel stay at the Embassy Suites, and a free dinner at the hotel. This was when I informed my wife, Jodie, that I entered the contest. I’ll spare the logistical details (getting childcare for our daughters [3 and 6] and time off work). Let’s just say it was certainly a nice moment when we boarded our Southwest Airlines plane in Austin Thursday night (October 28, 2010).

The morning of the contest, we headed to the hotel lobby. Had I not checked the other winners to see what their costumes looked like, I’d have been totally creeped out when we turned the corner to meet Julie (@PerkyJewels) and Steven, from Cleveland. Julie was an amazingly terrifying zombie with long white hair, white face, sunken eyes w/ grey contacts, blacked-out teeth, and blood from her nose down past her chin. Wearing a white dress and boots with 7” heels. Oh, and she had an axe and a human head as props too. Steven was wearing an outfit that celebrated bacon, which was awesome (Our family mantra is… Bacon comes from a pig, and pig is GOOD).

We waited a few minutes and nobody else in costume showed up so we got into the van to head to Southwest HQ. As we walked out of the hotel, we were joined by Drew (@curbcrusher). We learned Drew was a carryover from the previous day’s media event.

The first thing I saw inside Headquarters was a skeleton holding an iPhone to take a photo of a devil. He was standing in front of the lobby centerpiece, an amazing old grey castle with plenty of ghoulish characters (and a fleet of SWA planes above). 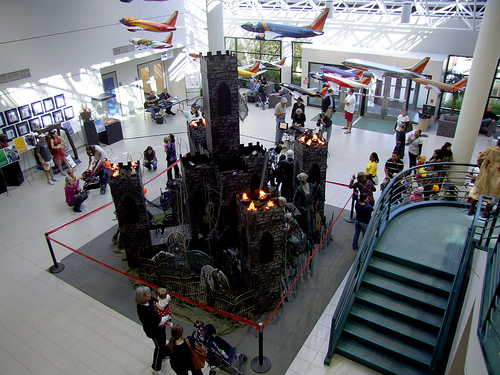 In the lobby we were met by the social media team, Christi McNeill (aka Mighty Mouse) and Brooks Thomas (aka Super Gyro) and taken to the cafeteria for breakfast and to get to know each other a little more. Bryan (aka “I’m Sellin Tha Twitter!”) joined us. We learned one of the other winners; Jasson (@jseiden5) and Mark, from Baltimore, had an “alarm clock malfunction.” Jasson’s winning costume was Larry David.

After breakfast, we started jumping around to the different activities. There were full-on stage shows put on by various divisions, fantastic walk-throughs hosted by others, and little activities around almost every corner. This was a family-friendly event and a lot of employees had their kiddos with them. I don’t know how many non-SWA employees were there, but it occurred to me that I was getting immersed in the SWA culture as an outsider.

I liken the experience to going to a performance of The Rocky Horror Picture Show without knowing any of the rituals that go along with it. Even though you don’t know the “Time Warp” or that you’re supposed to throw toast, it’s a fantastic time … and pretty soon you’re going “insa..aaaa.aaaane” with everyone else.

Anyhow … the Halloween Headquarters shows were fantastic. I know each division was competing against the others, but not sure what the prize was. It must have been something impressive as the shows were really stage worthy. We’re talking great acting, dancing, singing, and bands playing. Every show had a “We LUV SWA” tinge to it complete with lyrics being altered to be about the airline. Great stuff. Everyone played his or her parts to the hilt. It looked like each show had 3-4 performances that day. The extra bonus was, since we were the “Twitter Winners” we didn’t wait in line and got reserved front-row tickets to all of the shows.

The first show we attended was “Count On Me” which was put on by the Technology Department. This was a pretty spectacular dance revue – country, chorus line, salsa, stomp, etc. They blew the roof off the place (really, during the country dancing, one of the female dancers was picked up and kicked a tile out). It ended with Lady Gaga. Great show. 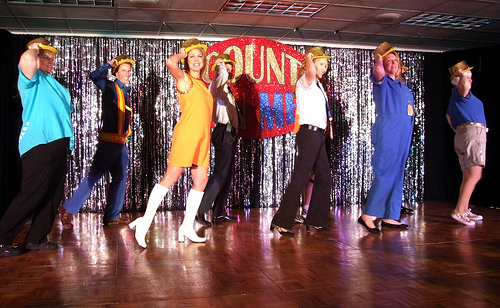 After this we headed to “Late Night with Planning” which was set up as a David Letterman-esque show with a live band complete with Billy Gibbons (ZZ Top), an interview with Richard Simmons, and cooking with Buddy “Cake Boss” Valastro and Lady Gaga … who expertly pulled an egg out of her feather-lined hat to assist in the process. 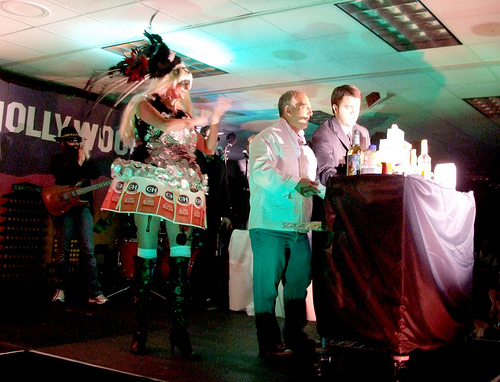 After this show, I noticed another couple following us around. They were dressed (fantastically) as contestants from the 1980s Nickelodeon kids show Double Dare. I didn’t recognize them … as I looked up all the “competition” online during the contest and Double Dare was not one I saw. I learned that Lindsay won the contest with a fantastic penguin outfit, but wanted to sync up with her brother, Brady, so they spent the night before busting out the matching costumes. So, we were all together. The four winners and their plus-ones.

It seemed natural now that we were all together, we’d head to a carnival … and the Finance Department was holding the “Finance State Fair” walkthrough. We encountered some great sideshow folks like the carnival barker (the top half of a man on a stick), the bearded lady, and the World’s Strongest Man. We took our photos in the various face-cut-out set-ups and of course at the “Kisses Booth” with the buck-toothed backwoods twins. I think my favorite of these was the “Snake Charmer” which was a man sitting there saying things like “You snakes look so fine tonight, you’re just lovely. Would you like a sip of Courvoisier?”

After the walkthrough it was time to sit again, so we were able to get into “The Late Flight Show” which was put on by the People Department. If I had to choose, I’d call this one my personal favorite show. The band played a few songs while waiting for everyone to get seated, and there was a stand-up comedian who was funnier than some I’ve paid to see. Guests included SWA CEO Gary Kelly (an Employee in costume), and musical guest … you guessed it … Lady Gaga.

Show number 4 came and it was a celebration of football commercials from the Cabin Services Department called “Halftime at Haf’s.” They SWA’d up spots from Old Spice (The Man Your Man Could Smell Like), the eTrade Babies, a great Bags Fly Free spot, and a few others. Really funny stuff, and the cross-pollination of the commercials were fantastic. 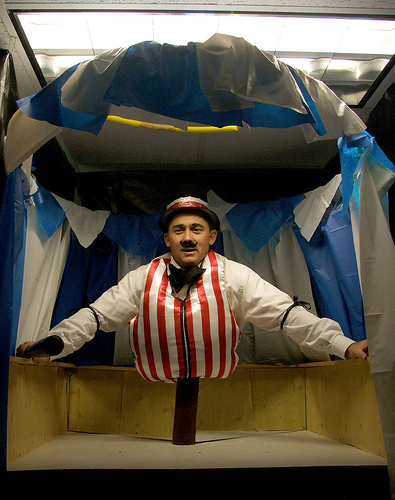 Next up was lunch. We stopped into the Communications and Strategic Outreach office (our host office) and enjoyed some Chick-Fil-A, then we were set free for about 30 minutes to explore on our own. I took the time to people watch, and it was a great time. Families enjoying themselves, adults having a great time, people taking pictures with others, and smiles all around.


When we all met up again, we took the “Super Mario Bros” walkthrough that was hosted by the Internal Audit Department. We were transported through the Nintendo game and followed Mario’s effort to save the Princess. The person who played Mario was fantastic … and we were all handed cinnamon candy to serve as fireballs to beat Bowser. We got to throw stuff and save the world. Yea! 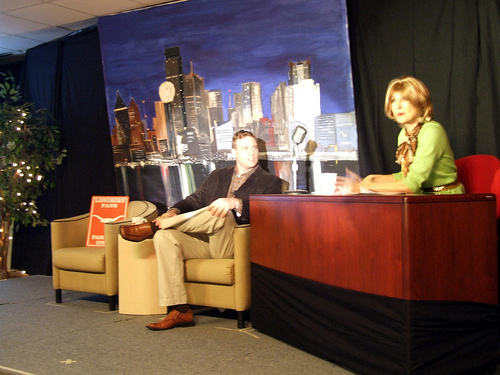 We went to the Executive Office’s “Toys Gone Wild” walkthrough that started with a “Snakes On A Plane” meets “Toy Story” beginning (at least to me), where the toys come alive and we run through and see monkeys destroying luggage. My favorite part of this was watching the little green toy soldiers stay really still … then shout something random and scare folks. We took our picture with a few of the characters, including Mr. And Mrs. Potatohead. I have to admit, at this point, I had no clue Chairman, President, and CEO Gary Kelly was dressed as Woody. 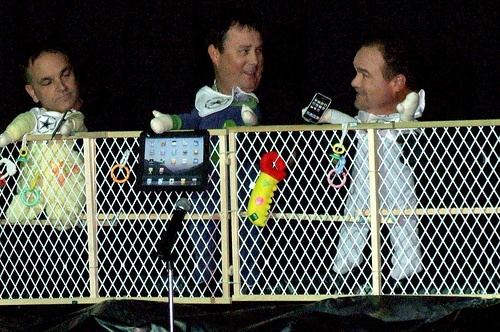 We had a few minutes to spare before the final show, so we ran up and found this “flip book” booth that we’d heard folks talk about. We ended up being the last people in line before they shut it down. OK ... we were the first people in line after they shut it down ... but we decided to stay and hope they’d let us go. And they did. Our kids loved seeing the seven seconds of video transferred into the hundred-or-so page booklet. Then we went to the lobby and had a photo taken of us in front of the centerpiece for $1 (the first dollar we’d spent on the trip).


The last show we checked out was Marketing Department’s “SWAmazing Race.” (Fake)competitors included Jon and Kate Gosselin (minus 8), a couple from the “Real Housewives” reality show, The Situation and Snooki from Jersey Shore, and two SWA Employees … hosted by a fake Ellen DeGeneres. The whole performance was great, but I’ve got to give a big nod to the guy who played Jon. How he didn’t crack himself up was amazing. It was the perfect last show for us. 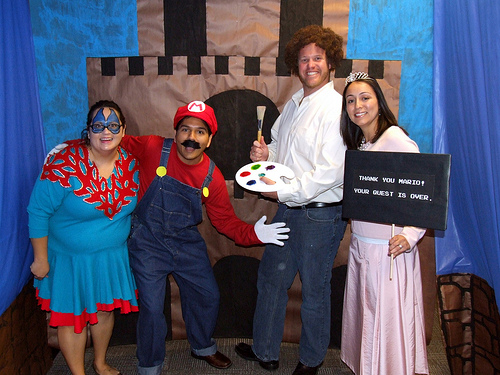 Once it was over, some of the other winners decided to go to a fantastic rooftop party hosted by personalities from Kidd Kraddick in the Morning, where I heard Julie’s zombie get-up won her the SWA Costume Contest and she got two tickets to fly anywhere SWA flies. In a Headquarters that was full of fantastic costumes and amazing folks, she really took it by a 7” heel, but let me tell you … her costume really was that good.

And the fact that they also chose little old me is wonderful as well. It really was an experience I’ll never forget, and the bonus is this little trip served as our anniversary celebration as my wife and I celebrated nine years of marriage on October 6.  Our 6-year-old helped us cancel plans that weekend when she got sick. So, thank you Southwest Airlines and every person who made this happen.

And thank you and rest in peace Bob Ross.

Anonymous4342
Not applicable
1) is the @brooksethomas as a super gyro??? 2) great photo set 3) having been a recipient of an @SouthwestAir twitter contest (#LUVClassic) I echo the thoughts in this blog. The folks at SWA truly do have fun on a daily basis (in work and in life) and I was very fortunate to get the chance to get into their little world if even for a little bit!
148 Loves