Putting together a magazine means talking to talented professionals who have become your friends over the years. It’s like a party, usually without the hangover. Plus you get to do it every month. Plus, in the case of Southwest’s Spirit magazine, there’s travel. Yeah, we know we’re lucky. 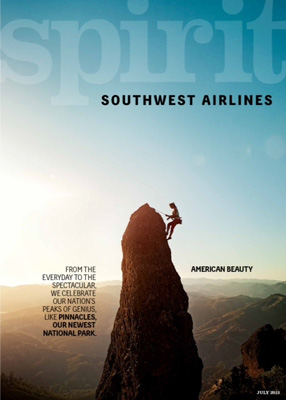 Take this issue, for instance. It started with a phone call from Bruce Anderson, a veteran journalist and travel editor of Sunset magazine. America had just named a brand-new national park in California, Pinnacles, which happened to be Bruce’s childhood stomping grounds. Bruce wanted to do more than just visit the place. He wanted to know what qualifies the place to be a national park—and what does that say about America?

When you hang up after a conversation like that, you can’t wait to read the story. And the further collaboration of really smart people in Dallas made the story even richer. But Bruce had the most fun of everybody, exploring the wilderness of his childhood and scanning the skies for America’s biggest bird.

Then Creative Director Kevin de Miranda sent photographer David Collier to the place. Kevin had a picture in hand that might make a great cover. It showed a rock climber scaling one of the weird formations that give Pinnacles its name. The photo was just short of perfect. So Kevin asked his photographer to reshoot it, this time using a woman. Done.

The story seems appropriate for an issue with a big package called “Made in America,” which celebrates homegrown products from Steinway pianos to Tabasco sauce. Do we seem especially patriotic this month? Well, duh.

For the Adventure, we head to the city that inspired our national anthem, Baltimore. And, as always, we do the numbers: Americans blow an average of 9 unused vacation days apiece. Scallops have as many as 100 eyes. And an Army-issued barbecue sandwich lasts two years.

Something To Cheers To: Drink Coupons Expiration Extended through 2020