Sure, we’re Southwest’s inflight magazine. But we don’t think of ourselves so much as a travel magazine--more of a general interest magazine read by people strapped into their seats. And our readers seem to see us the same way. Our story in February about Rob Summers, the first paraplegic to stand on his own, continues to generate lots of letters. Last month’s cover story, “The Power of One,” showcased people who make a difference.

But deep down, of course, we’re a travel magazine. So this month’s cover is all about what we really love: inspiring places. 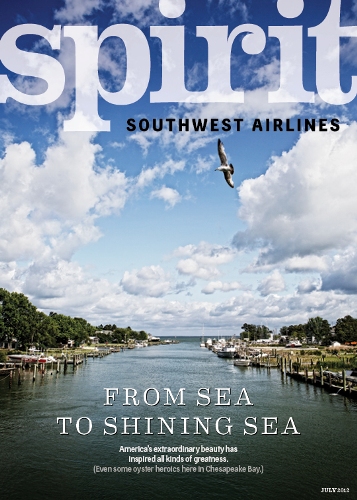 You’ll discover the lake in Vermont (yes, Vermont) where French undersea explorer Jacques Cousteau learned to love the water; the towns that Stephen King used to set his scariest books; the commuter rail line that sparked the Erector Set; the restaurant where a Boy Scout named Stephen Spielberg became a filmmaker; the plantation that launched Alex Haley’s Roots; the real-live courthouse in Harper Lee’s To Kill a Mockingbird; the mountain where a college professor wrote “America the Beautiful,” and the Harlem jazz clubs where Langston Hughes became one of our great poets. These places don’t just give us insights into the great American story. They show you where inspiration comes from. It’s not always out of the blue.

Also in this issue: the oysters of Chesapeake Bay, where some dedicated scientists and fishermen are working on a comeback for the struggling bivalves. This month’s adventure is in Kansas City. This month’s cocktail contains now-legal absinthe. And, as usual, the Numbers: nearly 33 million Americans live alone, a female flea consumes 15 times her weight in blood each day (yuck), and we’ll eat enough ballpark franks this year that--if you laid them end to end--would round the bases 28,489. Or allow a whole slew of us to consume 15 times our weight.