We at Southwest’s Spirit Magazine love to do stories about people who do things for others. Those stories help us live up to our name, after all. But to be honest with you, the true do-gooders of this world sometimes make me feel guilty. Yeah, I’m a good citizen and all that but I haven’t healed the sick in Calcutta or restored ocean habitat off New Jersey. Do you ever feel like that? As if you should be inspired by those stories but end up feeling a little down?

That’s why I love this month’s cover. It looks like a story about some rockers you can still hear on FM radio. But it’s really about a very cool guy named Michael Matthew Ferrell who has dedicated his life to a group of seniors. Everybody who sees that cover asks, “What group is that?” They’re a group called Alive & Kickin’, based in Minneapolis, and according to senior editor Alison Miller, they’re a hoot. 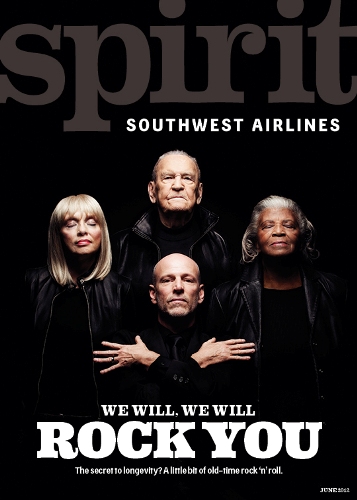 Alison and the rest of the Spiritistas covered some other equally fun do-gooders this month, including the founder of one of the largest urban farms in America, a woman who keeps African-American voices alive, a baker run for woman immigrants, a ten-year-old scientist named Cassandra who turned cooking oil into home heat…and Pearl Fryar. Pearl has brightened up one of South Carolina’s poorest counties with topiary that attracts people from miles around.

None of them makes me feel guilty. They make me want to do fun stuff like that. That’s not do-gooding. It’s do greating.

Our ever-popular Numbers department includes the following numerological nuggets: Each of us is weighed down by a ton of pressure. A tarantula has 18 more grams of protein than a strip steak (yum!). And 24% of people bring their phone to the bathroom on every trip.

Um, what do the rest of them do?