Best of Flashback Fridays: Intriguing Oddities from Southwest’s Past

I selected this particular Flashback installment to be a “Best of” for a number of reasons.  As a former Braniff Flight Attendant, I flew on the 727-200 featured in the first photo more times than I can count (but not with this very unique Southwest livery).

And, as a California native, I always loved the “Golden State”-shaped boarding passes that were used “back in the day.”  Long after those plastic cards were retired, I asked a friend in Marketing if there were any that might be still be around.  Surprisingly, there were a few, and the one that I was given has the number 95 on it—not a great boarding position, for sure—but it is the year I started here at Southwest.  The biggest reason, though, is that I am continually amazed at how many unexpected treasures Brian managed to find to share with us each week and how much richer we are for those efforts.

Looking back at the 41+ years Southwest Airlines has been in business, it’s not surprising to find some historical oddities in our files.  In this week’s post, we look at an unusual logo or two, a unique boarding pass, and a face-to-face baggage delivery system. 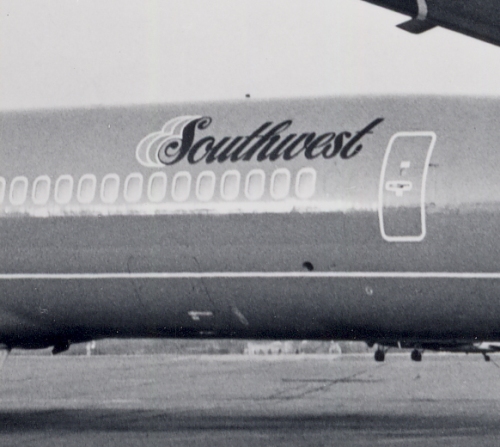 Yup, that’s a Southwest aircraft in the photo above.  It is N406BN, and it is the 727-200 that Braniff provided to us on lease in 1979 as settlement of legal action we had brought against them.  It flew between Dallas and Houston for about ten months, even though the lease was supposed to have lasted two years. Besides being unique as a Southwest 727 (we would later lease six 727s from PeoplExress in 1983 with a more standard livery), it is the only aircraft to wear this stylized logo. 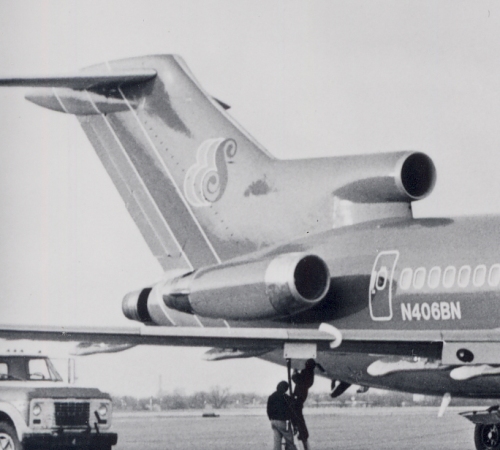 The uniqueness of N406BN’s livery extends to the vertical stabilizer.  The airplane carries a script “S” with the same shadowing used in the fuselage title.  As proof this “one-off” livery was an experiment, we took delivery of seven 737-200s during the same general time period with the standard block white letters on the tail.  The timing of the logo is interesting because it happened during the time that Howard Putnam was Southwest’s CEO.  I don’t know if he played a role in the logo, and our advertising agency at the time, the Bloom Agency, has been out of business for a long time now, so we can’t ask them. 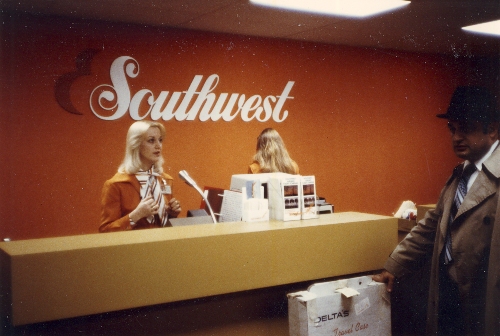 Even rarer is the photo above of what I am pretty sure is our Beaumont operation.  This looks like a gate because of the microphone to make boarding announcements, but it’s confusing because there appears to be a bag belt behind the counter.  The answer might be that it was a small facility so the gate and ticket counter could have been combined.  Southwest flew to Beaumont in southeast Texas between March 5, 1979, and September 5, 1980.  As far as I can tell, this is the only Southwest airport that used a variation of the logo carried on N406BN.  The big difference is that the script was in black on the aircraft, and it is white behind the counter.  Since Beaumont service was so short-lived, it’s not surprising that more folks don’t know about the logo.  Also of note is the Customer with the Delta garment bag box.  When I worked at Delta, the boxes were hugely popular, and we were told the cost of the box outweighed the cost of damage claims to garment bags.  (Delta didn’t conditionally check garment bags.)  Each day, it was someone’s duty to “build” a supply of boxes for the shift’s flights, and it wasn’t unusual to see these boxes in the bins of different airlines because passengers would either save their bags for future trips, pick up discarded boxes in the claim area, or ask for a box, even when they were flying another airline. 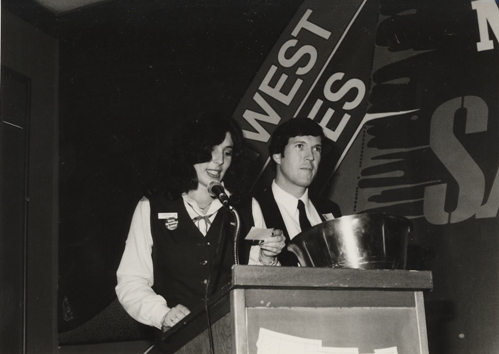 Speaking of logos, the photo above was taken at some kind of promotional event held in the early 1980s.  Behind the speakers is a representation of our aircraft tail, but these markings were never carried by a Southwest aircraft.  The graphic has both “Southwest” and “Airlines” on the diagonal tail stripes, but even in the very earliest days when our aircraft did carry the word “airlines” in the title, only one word, either “Southwest” or “Airlines” was on the tail.  The representation shown here was also used on our printed ads during this period. 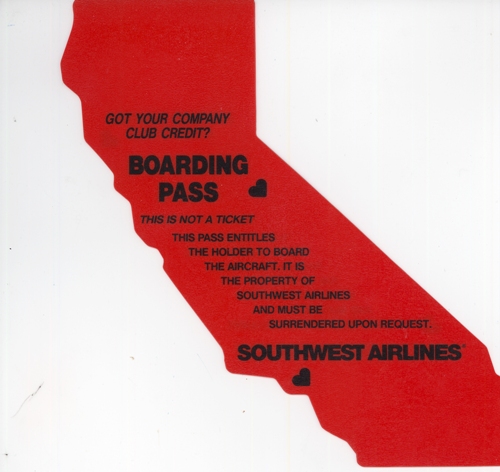 Those of us with at least ten years of Southwest seniority remember the rectangular plastic boarding passes with numbers that were used to board our flights.  A different color was used for each flight, so the Operations Agent could tell at a glance that the Customer was boarding the correct flight.  The boarding passes were uniform throughout the system except for the time when we used a unique version in California with the distinct shape of the Golden State (above).  The example above is a spare boarding pass that was used when a pass with the preprinted number went missing.  Rather than throw away the remaining 136 cards, the Station would use a black marker to write in the missing number on the appropriately colored blank spare. 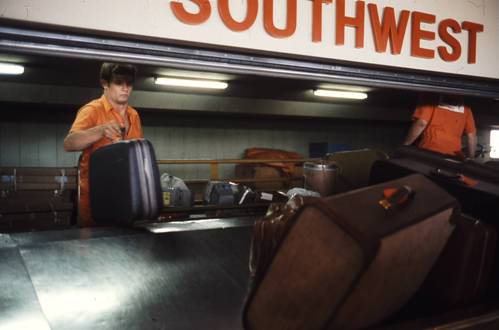 And finally, we look at a unique method of baggage delivery to the claim area that was as old as the industry itself.  We are looking at the claim area at Love Field, and the Ramp Agents would simply raise metal shutters and set the bags on the shelf.  This method of baggage delivery was an original feature of the terminal when it opened in 1958, and it wouldn’t be until later remodeling that Love would finally get bag belts in the claim area.  Terminal One in Phoenix had a similar style of claim area, although it was outside under an open-air shed.  The biggest drawback to this system is that it put a large number of bags in a concentrated space, especially if Customers were slow to claim their bags.  Also a Customer who had a bag at the bottom of the belt might have five or six bags resting on his or her bag, making retrieval difficult.

These lost logos from the past remind us of how we often take our daily routine for granted, when in reality, we are writing our history every day for those who follow.

stove
Not applicable
Another home run, Brian. Have a great weekend!
19 Loves

gary-soloff
Not applicable
The California Boarding Card were the worst, the stack would never stand up straight and would typically spin into a messy pile. My agents at LAX would always revert to the standard boarding cards. After numerous complaints we stopped using them.
13 Loves

sdguy1963
Not applicable
Those were the days...and I remember them well. I love Southwest! (Btw, Santa Barbara, CA (SBA) still uses that type of baggage claim system--even in their brand new terminal!)
0 Loves