Choosing this week’s “Best of” Flashback Fridays was fairly simple—a “no-brainer,” some might say.  To begin, LAX celebrated a birthday this week, having turned the ripe, old age of 31 in Southwest years.  However, there was another reason—one that also has to do with a birthday—a birthday that wouldn’t be celebrated the same way this year as it had in the past. 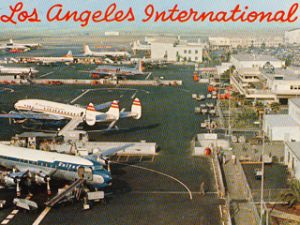 Wednesday, September 18, would have been our dear friend Brian’s 61st birthday, and because he spent so much of his youth living nearly adjacent to the growing Los Angeles airport (as you’ll read in his post), it seemed fitting on so many levels to showcase Brian’s detailed reminiscences of LAX this week.  Hope you enjoy it as much as I did. This week, we take Flashback Friday to “the coast” for an airport with which everyone is familiar (thanks to television and movies), even if they have never visited the facility, and that airport is Los Angeles International (LAX).  Compared to Midway (featured in a previous post), LAX is a relative youngster because prior to the end of World War II, airlines serving the Los Angeles area primarily used Glendale’s Grand Central Airport or the Lockheed Air Terminal at Burbank (today’s Burbank airport). 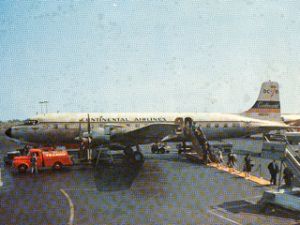 Like we did a few weeks ago with Dallas Love Field, let’s use some post cards to look at LAX before Southwest Airlines flew there.  The photo above is a shot of the original terminal taken in the mid-1950s looking toward the northeast and downtown Los Angeles.  This facility was located to the east of the current complex, but as you can see, it utilized a series of separate terminals also.  Century Boulevard runs from the middle left edge of the postcard to the upper middle right.  Note how full the parking lots are—there’s no doubt that Angelenos loved their cars.  Sharp-eyed airline geeks will notice the Pan American Boeing Stratocrusier parked at the end of the lower row of gates.  Our viewpoint is just over Sepulveda Boulevard, and the current terminal complex will be built behind us.  Today, the area to the left of Century is filled with hotels. 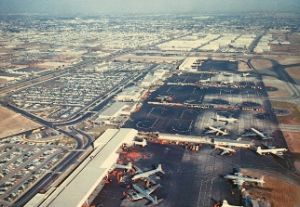 Here’s a view above from the other direction toward the west.  We get to see three of the four terminal buildings, and it’s obvious the terminals were built with California sunshine in mind.  The terrace in the middle terminal on the second floor was part of the airport’s restaurant.  The script “Los Angeles International” is where the ocean would be, and the current terminal complex would start right under the words.  The hangar with the round top at the upper right is the old Western Airlines headquarters and is currently part of Delta’s maintenance complex at the airport.  If you look just above the United DC-6B at the lower left, you will see a group of passengers standing under and next to the small building waiting for flight boarding. 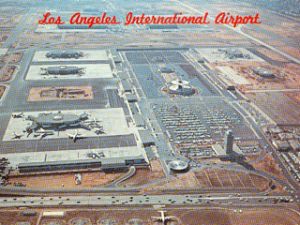 Although my postcard is damaged, I wanted to share the scene above with you because it gives a great idea of what flying was like in the late 1950s.  The passengers from the Continental DC-7B are deplaning on a gold carpet—the airline advertised Gold Carpet Service.  Look at the vintage fuel truck and the ladder behind the #1 engine for the fueler to use to climb up on the wing. Now we are looking at an early view (above) of the current complex.  Only the United terminal at the lower left is completed and in use.  Note the lack of cars in the rest of the parking lots.  This view is from 1961.  Terminal One used by Southwest isn’t even planned at this date, and the site is filled with the airport’s employee parking lot, which is the open site at the right of the photo.  Another later addition will be the Bradley International Terminal which will run across the photo at the top of the terminal complex.  Today, the roadway through the terminal is on two levels, and parking garages fill the space between the terminals.  In addition, the original terminals have been extensively remodeled. 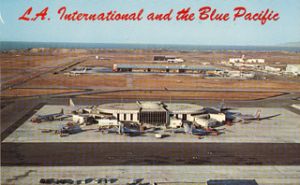 One of the next terminals to open was Terminal Four used by American.  The view above looks to the west on a very clear day.  At the bottom of the frame, we see cars belonging to the construction workers at Western’s Terminal Five.  The current Bradley International Terminal occupies the site where the North/South crosswind runway is located immediately above the American terminal, and the area beyond is currently filled with hangars and remote gates.  You can see Point Dume, the northern limit of Malibu, just under the “c” in “Pacific.” My dad was transferred to LAX with Continental in 1962, so the airport has always been one of my favorites.  We lived in El Segundo, immediately to the left of the last photo above, and for five years, the airport was part of my daily life.  In fact, Dad took me inside the satellite for Terminal Six before it opened to the public.  Later, when I was with Delta, I went to LAX for training and got to see behind the scenes in the operations area, the old Western hangar, and the employee restaurant at the base of the signature Theme Building.  I do love LA.
4 Loves