Best of Flashback Fridays: Origins of the Boeing 737, Part Three

This continuation of Brian’s “Origins of the Boeing 737” series originally ran in March, 2012, and it’s always interesting to look at all that has changed in the short period of time since the post first ran.  In this case, we had yet to take delivery of our very first -800.  Now, just a little more than a year later, we have 43 of them in our fleet, with more to come.  Of course, one huge (and sad) change is that our wonderful Coworker Brian is no longer here to share his aviation anecdotes and vast knowledge of this industry we all love, which is one reason we enjoy these great “reruns.”  Hope you do too!

After taking a week off, we resume our brief look at the history of the Boeing 737 with the “Classics” family that comprises the 737-300, 737-400, and 737-500, and Southwest played a major role in the development of two of these variants.  Beginning in 1983, Southwest leased six 727-200s from PeoplExpress to operate new nonstop service between Houston and San Antonio on one hand and Phoenix and Los Angeles on the other.  Our 737-200s had neither the range nor the payload to successfully operate these new medium-haul routes, so the 727s were a stop-gap measure until a more suitable aircraft could be found.  That aircraft would prove to be the Boeing 737-300. 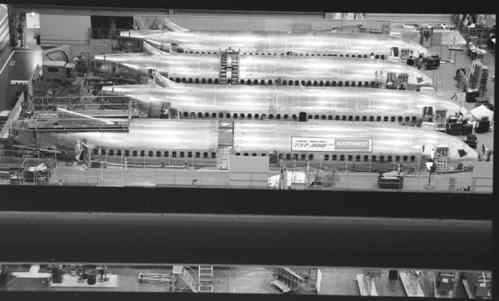 The need for a larger, medium-haul airplane was Southwest’s impetus to be a launch partner for this new and improved 737.  At the same time, USAir (their name back then) needed a larger aircraft to serve its Florida routes.  These two airlines were pretty much alone in their support of the new 737 variant.  In fact, during those early days, the 737-300 was nicknamed “the airplane nobody wants” in some quarters.  That attitude would soon change.  Although the very first 737-300 built went to USAir, the first 737-300 to enter worldwide airline service would belong to Southwest, and that airplane, N300SW, is adjacent to three shorter 737-200s at the Renton plant in the photo above.  Besides the difference in length, the big spotting difference is the larger dorsal fin fillet of the -300.  It’s worth noting that the -300 didn’t immediately replace the 737-200, which would continue being built alongside the Classics until 1988. 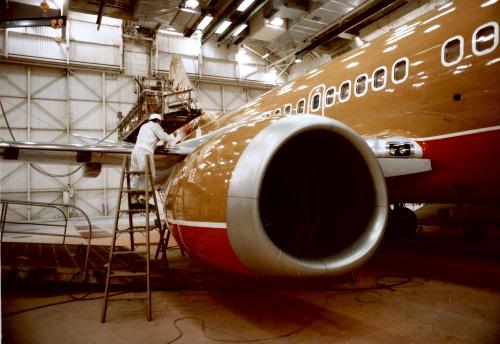 The -300’s engines were unlike those used by the earlier 737s.  CFM, an international consortium made up of General Electric and SNECMA, a European engine manufacturer, had begun development of the CFM-56 high bypass fan jet.  This new engine allowed DC-8 operators like United and Delta to modify their DC-8-60 series aircraft to the -70 series with the new engines, and these airliners eventually would find a second home with overnight carriers like UPS.  While no commercial 707s were reequipped with the new engines, the AWACS variant of the 707 and the 707’s cousin, the KC-135, received the bigger engines.  The CFM-56-3 model was designed for the 737-300, and because of the 737’s low ground clearance, the engine accessories (like the gearbox) that normally were located under the engine had to be moved to the engine’s sides.  The fan blades also had to be shortened.  These modifications account for the somewhat ovoid shape of the 737-300’s intake.  (N300SW receives its initial painting in the photo above.) 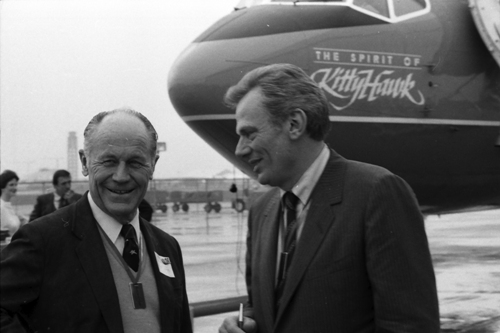 Christened “The Spirit of Kitty Hawk,” Southwest placed the world’s first 737-300 into service on December 17, 1984, the 81st anniversary of the Wright’s first flight.  Legendary performer Bob Hope introduced the aircraft at a gala the previous evening, and Chuck Yeager, the first man to break the sound barrier, flew with the aircraft on its initial service.  (Yeager, on the left, stands next to Herb in the photo above.)  “The Spirit of Kitty Hawk” has an honored place at the Frontiers of Flight Museum here in Dallas.  Airlines all around the world quickly learned what a thoroughbred the 737-300 was, and orders began to flow in.  Over 1,100 737-300s were constructed.  Besides Southwest and USAir, other familiar operators of the -300 included Western/Delta, Air California/American, Continental, United, Lufthansa, British Midland, and China Southern, just to name a few. 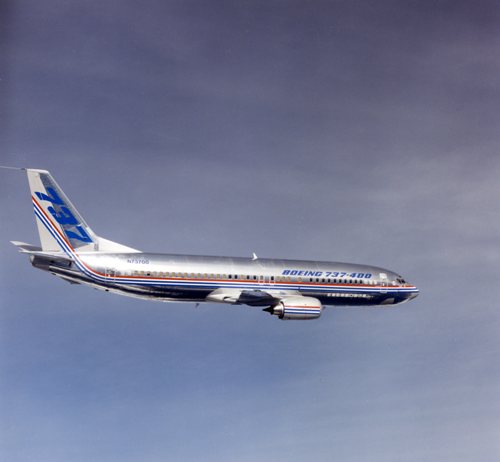 Some airlines, especially European carriers, desired a larger aircraft, and the 737-400 was born.  Its greater length required a second overwing window exit.  International airlines using the -400 included British Airways, Qantas, Malaysia Airlines, KLM, and at home, Alaska operated the longer version as did Piedmont (who was this version’s launch customer) before being acquired by USAir. In the photo above, the first 737-400, N73700, operates a test flight wearing Boeing colors.  This aircraft later entered service with Piedmont as N402US. 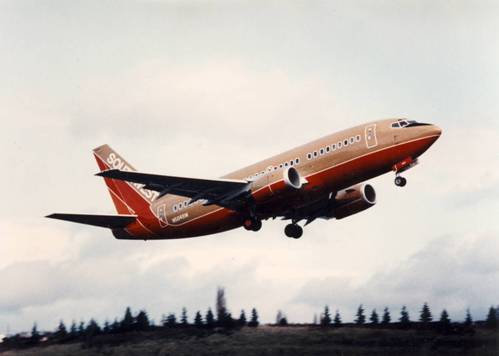 The final Classics version, the 737-500, was the second 737 variant to be introduced by Southwest.  (Our fourth -500, N504SW takes off from an airport in the Pacific Northwest, above.)  The -500 has a fuselage the same length as the -200, and it bettered the -300’s performance, with the shorter fuselage making it ideal for segments that didn’t need the larger aircraft.  One side benefit of the -500's lighter weight and quicker climb rate was its smaller sound footprint upon takeoff, and Southwest used the -500 at the Orange County Airport until the more environmentally friendly 737-700 was introduced.  A sampling of other 737-500 operators includes Continental, United, Lufthansa, SAS, LOT Polish, Aerolineas Argentinas, and ANA.

Thanks to Michael Lombardi, Boeing's Corporate Historian for the first three and the fifth photos.

When is the best time to buy tickets overall?