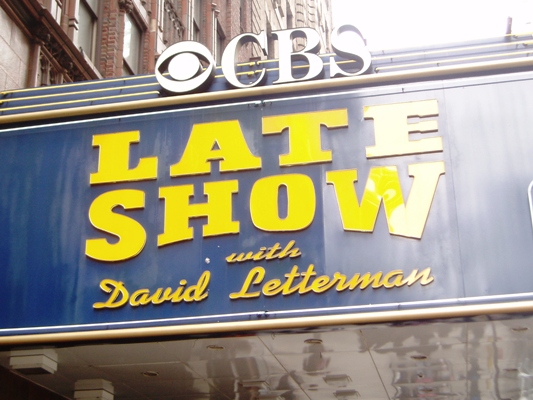 In the interest of total disclosure, I have been a David Letterman fan since the early 1980s when his show used to be on NBC after Carson.  At the time, I worked the late shift, and on the West Coast, his show came on at 12:30 a.m.  Dave and his off-the-wall humor were a great way to unwind from a “hard night’s day.”

My loyalty remained when he moved to CBS in 1993, and even though his current show airs much earlier at 10:30 p.m., I usually can only stay awake to watch the Friday edition because I get out of bed at 4:30 a.m.  on workdays.  Yes, I think Leno is funny, but Dave is like an old friend because he isn’t afraid to be grumpy, or a smart aleck, or funny—just like a longtime friend would be.  When I found out that Blog Girl Paula Berg and I had been asked to make a presentation in New York City, I immediately went to the “Late Show” web site to request tickets.

I didn’t hear anything until about a week before the trip.  During my drive home, Kate from the Late Show was on the phone.  She shared the news that tickets were going to be held for us on the May 14 taping.  Woohoo!

Our presentation on Nuts About Southwest was over before lunch, so we had the opportunity to walk from the hotel to the heart of Times Square on a day with absolutely perfect weather.  The Ed Sullivan Theater is at 53rd and Broadway, and the Late Show audience coordinators could teach the Disney folks a thing or two about managing a crowd of people.  We picked up our tickets inside, and we were told to return at 3:45 and to line up in the order of the number written on our ticket.  (Hmm, maybe the Late Show staff learned a thing or two from my favorite airline?)

When we returned, the staff came outside to warm up the audience, and they were pretty funny (a little raunchy, but hey, this is Times Square).  Once we went inside, it was nonstop entertainment until we walked out the door.  The “CBS Orchestra” with Paul Shaffer played until the show started and all through all the commercial breaks—what a fantastic band!  The guests were Jack Hannah and his menagerie of unusual animals and Kid Rock who played  "All Summer Long" from his latest album.  Professional golfer Annika Sorenstam did the Top Ten List, with ten things about her upcoming retirement.  Aside from all the fun, the thing that struck me most is how small the theater is in real life.  The camera makes it look huge, but it is a very intimate setting.

According to the folks watching back home, we didn’t make it on the screen, but it was a fantastic time.  Now, if I can just get tickets to Saturday Night Live…

Jill6
Not applicable
Love David Letterman! Very cool that you were able to get tickets.
15 Loves 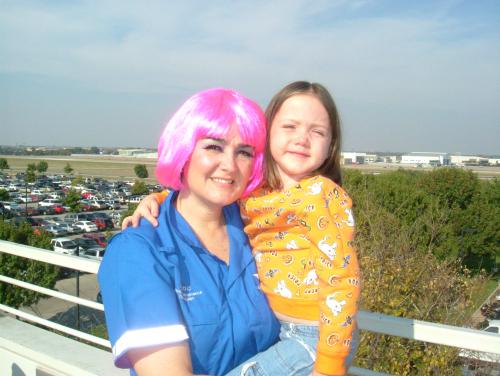 kfrancis1
New Arrival
In my next life I want to be Jack Hannah! I have always wanted his job since I was a little girl. Also, the rapport between Jack and Dave cracks me up!! Lucky you Brian.
15 Loves

blusk
Not applicable
Yeah Jack seems like he is easily distracted, and Dave is always hesitant about the animals. It was a good show to see in person.
9 Loves

Paco_Cerda
Not applicable
Jack Hannah has to have one of the coolest jobs ever in the history of mankind. Glad you got to go to see Dave! Jedi Blog Master
11 Loves

blusk
Not applicable
Jedi Blog Master, Good to hear from you, and may the force be with you. Blog Boy
10 Loves

Anonymous1883
Not applicable
Hi Letterman fans. I am trying to plan a trip to NYC in December and trying to find out when Letterman is on vacation and not taping so I won't plan my trip then. Do you know if he typically tapes the first week in December? Seems like that may be a vacation the week after Thanksgiving. Any advice on how to find out? Or do you know? Thanks!!
13 Loves

Anonymous960
Not applicable
I can't be completely sure, but Dave usually tapes through the end of November sweeps or at least Thanksgiving week, then takes a week or two off.
10 Loves