This episode of Red Belly Radio was recorded at the Dallas Maintenance Center at our 6th annual, 2008 Southwest Airlines Pigskin Plane Pull. Footballs have not been made of pigskin; nor have planes been moved around by hand for years, but that is exactly went on—pulling one of our Boeing 737s with human power! 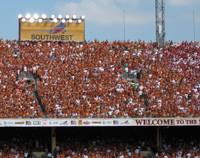 It is all part of the event known as the Red River Rivalry or the Texas-OU football game (OU-Texas for those fans from Oklahoma). This year marks the 103rd meeting of the teams (football) and the sixth meeting of the other teams (plane pull).

The contest is simple enough, 10 people, drawn at random, pull an 83,000 lb. plane 50 yards. They take turns and race against the clock. (We don’t have a race between two planes—that would be silly.) It works out that each person has to pull the weig

ht of a Chevy Suburban and a Mini Cooper—with a 150 lb. person sitting in each of the cars.

The team with the best time wins stuff but mostly bragging rights. Over the last six contests, the team pulling for The University Oklahoma has a lot to brag about. Losing only in 2007, they have won five of the six contests. Be sure to check out the video of the event on our video blog.


The gambler in me wishes to find some correlation between the plane pull and the actual football game, but sadly, I have found none. Although I heard there were some scouts here from Vegas checking out the event for odds-making next year. 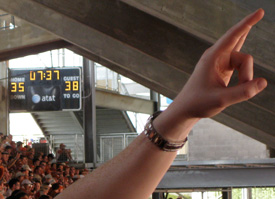 Listen to the play-by-play and all of the interesting goings on of this quality podcast. Jump over to the archive to listen to all of the Red Belly Radio episodes, or subscribe in iTunes to the RSS feed and get a new one every Wednesday.

Photos top to bottom: Nose of plane to be pulled adorned with the Red River Rivalry Logo; Southwest Airlines sign at the game at the Cotton Bowl--why are light always on during daytime games?; the team pulling for OU with the cheerleaders; and with Southwest Airlines references were all over the stadium, the scoreboard with 7:37 left in the game.