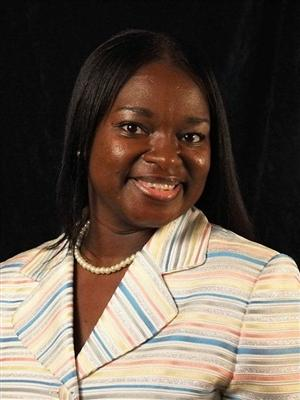 There’s hope!  We’ve partnered with our friends from Bryant Park to reunite two long-distance LUV couples in New York City in honor of the LUV Month!  We’re calling for long-distance LUV couples of all kinds, be they platonic, familial, or friendly, to enter our Valentine’s Day Contest.  Eligible sweeties include your mom, best friend, brother, college roommate … you can enter with anyone you love and miss.  Just remember, one of the partners in your long-distance duo must live in the New York City area.

To enter the contest, visit the Bryant Park Facebook page for your chance to win a free flight on Southwest Airlines!  Facebook viewers will vote on their favorite submission. 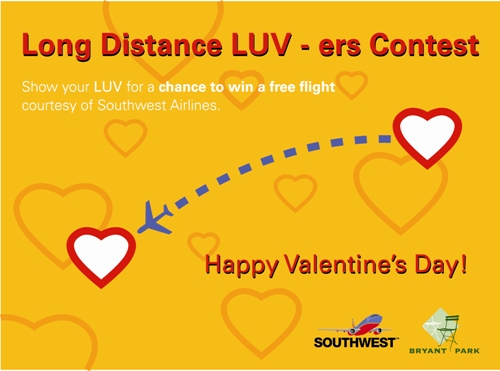 Good luck to all of you LUV Birds out there!

Brian_K__Meyers
Not applicable
Hello to SOUTH WEST AIRLINES and customers. I would like to pass this pass travel experience I just had with my work vacation. To ever whom my read this letter, I thank you in advance. It started by trying to get pass TSA without taking everything off….. Any way if I may I would like to pass on to you that you hired personable and caring employees. My flight to Florida started around 8:30 in the morning from Detroit to Chicago a quick up and down. This part of the story I probably shouldn’t say but I ordered a drink no one charged me when getting off I said I owe for a drink? She said it was on her, again thank you. See there they just made a customer happy. Arrived in Chicago departing from plane walking to the next gate, almost there I realized my phone was no longer on my side; yes it to have fallen off in my seat. So back to the plane I went at the gate they already had my phone thank you once again South West. Well to get on with the story I don’t wear rings watches or chains, because I’m going to meetings and dinners you know look nice. So I had put on my wedding band, fathers ring and a watch my exchange son gave me for a gift. I remembered as a child my father wearing that ring, long into me being an adult. Well on the flight to Florida Tampa I had to get up and use the rest room which I went to the back of the plane as leaving the lavatory I pushed the bottle of hand sanitizer rubbed my hands grabbed paper towel wiped my hands and threw the towel into the waste. As I arrived in Tampa grabbed my bag in the overhead that I did NOT HAVE TO PAY FOR thank you again..By the way that same bag leaving Ft.Myers on the home flight there was a cost for three pounds over for that bag….a cost to me for that same bag being two inches to tall and I think I was charged for a seat assignment. Well you can guess that I was not fling the friendly sky’s of South West at that time at all. Any ways I went on my way out of the terminal across to the car rental as I pulled my wallet out I had realize I was no longer wearing my father’s ring my heart hit the floor at that time. Called my wife Kathy I told her what I think had happen, she said to give it a try to find it. Off to the South West counter I went there a gentleman called down to the plane, it had already departed. He then directed me to the South West I believe it was the lost and found. There was three of the best employee I think you have Susan Fulmer, Christina Janssen and Evaughn Rothman. Sorry ladies if I have this part wrong but I believe Susan it was grabbed the phone started calling her people at the gate, they told her the plane had left, she then quick called someone else they said they did not dump the trash there, she then found out where the plane was going got a hold of someone there, Susan then told me of the story of her father’s ring she was wearing on a trip she thought she had lost in a rest stop. She said hours later while driving she noticed he fathers ring was gone; too far away to go back she said she wrote it off as a lost till she arrived home and in her shoe it appeared. Well Susan then told me there was nothing more she could at this time so she took my name and number and said she would call me if she found out anything, I said thank you for what you had done so far. Hours later going into the Hilton in Clear water I received a phone call, again I apologize but I believe it was Susan she had told me no luck but it was one in million if they would have found it… I said you did try and thanked her very much I truly believe no other air line would have done this much for someone, and so I moved on heart heavy. Hours later having drinks with friends from Zimmer Roofing at the Duro-Last convention the phone rang I answered It? It was South West and she told me that Cant William found my father’s ring in the trash. They never did stop looking!! Talk about one in a million, I could not finish the conversion I handed the phone to Stacy to get information. South West ended up shipping the ring Fed-X to my home. I would like to thank South West Air Lines and employees for going up and above all others in finding my ring sincerely: Brian K. Meyers. The friendly sky’s of South West is now my choice for getting away.
10 Loves