CONTEST ALERT: #ViddyADay Will Help You Get Away!

Employee
You know the old saying... a Viddy a day keeps the doctor away?  Okay, so I used my unwarranted creative license there, but it's not entirely false.  For three days in August, we're partnering with our Viddy buddies to give you a chance to get away to one our 76 Southwest cities. 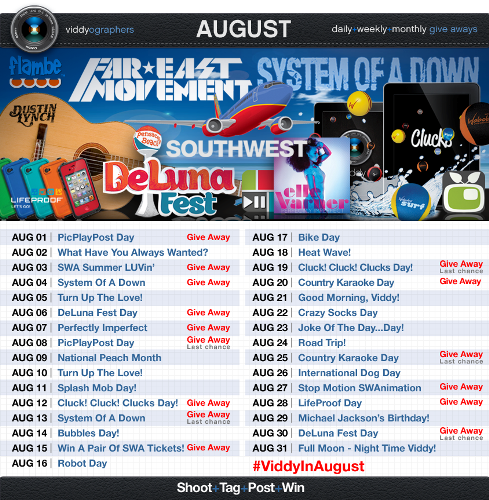 The objectives are the same, but very different.  Of course, you must have the Viddy app installed on your smart phone in order to participate.

Here's a bit of help from our Sundance winner and a couple others we really liked:

1. To Enter:  No purchase or obligation necessary. The Contest has three Contest periods. The first Contest period runs August 3, 2012 from 2:00 a.m. CT - August 4, 2012 at 2:00 a.m. CT; the second Contest period is August 15, 2012 from 2:00 a.m. CT - August 16 at 2:00 a.m. CT; and the third Contest period is August 27 from 2:00 a.m. CT - August 28 at 2:00 a.m. CT.  To enter without purchase or obligation, submit an original Viddy (“Video”) to us using the #SouthwestAirlines hashtag during the applicable Contest period. By entering, Entrant grants Sponsor an irrevocable, perpetual, royalty-free, freely transferable license to use the Video for all purposes, in any and all media, whether now known or hereafter devised.  Entries may not violate any third party rights nor use any third-party intellectual property such as logos, trademarks, copyrighted  or background signs.  Entrants acknowledge and agree that their entry does not violate any rights of privacy or publicity and that they have the written permission of those appearing in their video to submit their image.  Entries must not disparage; contain material that is inappropriate, indecent, or vulgar; or promote bigotry, racism, hatred or discrimination based on race, gender, religion, sexual orientation. Entries will not be returned. Entries limited to one (1) per person per Contest period. Any person found using multiple Viddy accounts to enter will be found to be ineligible. Anonymous entries will be considered invalid. You warrant your video will not be sexually explicit, unnecessarily violent or derogatory.  It cannot promote drugs, alcohol, or firearms.

Creativity and Originality: 20%
Entertaining: 25%
Southwest Appeal: 35% -  entry should reflect our Culture and Fun-LUVing Attitude.
Rules: 20% Read and complied with the official rules. Prizes are guaranteed to be awarded.

3. Prizes: Three (3) Grand Prizes will be awarded – one to each Contest period winner.  The Grand Prize will consist of two (2) roundtrip tickets on Southwest Airlines (APV for Southwest Airlines tickets is $420). Tickets are subject to Southwest Airlines terms and conditions; certain restrictions may apply; no blackout dates. Airline tickets awarded will be open origination and open destination and will expire one year from date of issue. Expiration dates will not be extended, and tickets will not be refundable or redeemable for cash or credit at any time, nor will tickets be replaced if lost or stolen. Tickets may not be sold to a third party. Tickets are valid on Southwest-operated, published, scheduled service only from the airport nearest the winner's residence served by Southwest Airlines. If the winner does not live in a city served by Southwest Airlines, he/she is responsible for transportation to the nearest airport served by Southwest Airlines. No substitution or transfer of prize will be permitted.  The Sponsor reserves the right at its sole discretion to substitute the prize with another prize of equal or greater value in the event that the aforementioned prize is not available.

4. Eligibility: Contest open to all legal US residents, 21 years and older as of August 3, 2012 and who have downloaded the Viddy App.  Employees of Southwest Airlines Co., AirTran Airways, Inc., Viddy, Inc., and their advertising and promotions agencies, and their immediate families (spouse and parents, children and siblings and their spouses) and individuals living in the same households of such employees are ineligible. Void where prohibited or restricted by law. Contest subject to all applicable federal, state, and local laws and regulations. By participating, entrants agree to these official rules and accept decisions of the Sponsor as final. Void in Puerto Rico and where prohibited by law. The promotion is offered in the United States only and shall only be construed and evaluated according to United States law. Do not proceed in this site if you are not located in the United States.

5. To Claim Prize: Potential winner only will be notified by Southwest Airlines via e-mail, and potential winner must provide valid address (No P.O. Boxes). Unclaimed or undeliverable prize will be forfeited and awarded to an alternate winner. Prizes are guaranteed to be awarded.  Acceptance of prize constitutes permission (except where prohibited) to use winner's name, hometown and likeness for purposes of advertising, promotion and publicity in any media without additional compensation. Potential winners must execute and return any required affidavit of eligibility and/or liability/publicity release within one (1) day of notification attempt or prize will be forfeited and an alternate winner may be chosen. If a potential winner cannot be contacted, fails to sign and return the required affidavit of eligibility and liability/publicity release within the required time period, or if a prize or prize notification is returned as undeliverable, potential winner forfeits prize.

6. Limitation of Liability: Neither Sponsor, nor their affiliated entities, are responsible for printing or typographical errors in any related materials; stolen, fraudulent, entries or mail; or transactions that are processed or lost due to computer or electronic malfunction.  Winners are solely responsible for payment of all federal, state, and local taxes on prize and for any travel or other expenses not specifically mentioned in prize description.  Sponsor reserves the right to cancel or modify Contest if fraud or technical failure compromises the integrity of the Contest as determined by Sponsor in its sole discretion. This Contest offer is being made exclusively by Sponsor.

7. Winner's List: To request a Winner's Name List, send a self addressed stamped return envelope, after August 29, 2012, to Southwest Airlines Emerging Media. All requests must be received by September 30, 2012.  Utah and Washington residents may omit return postage.

arball
Not applicable
Are there other ways to be notified of winners aside from the SASE method at the end of the month? Would love to see the winning entries! Thanks!
96 Loves 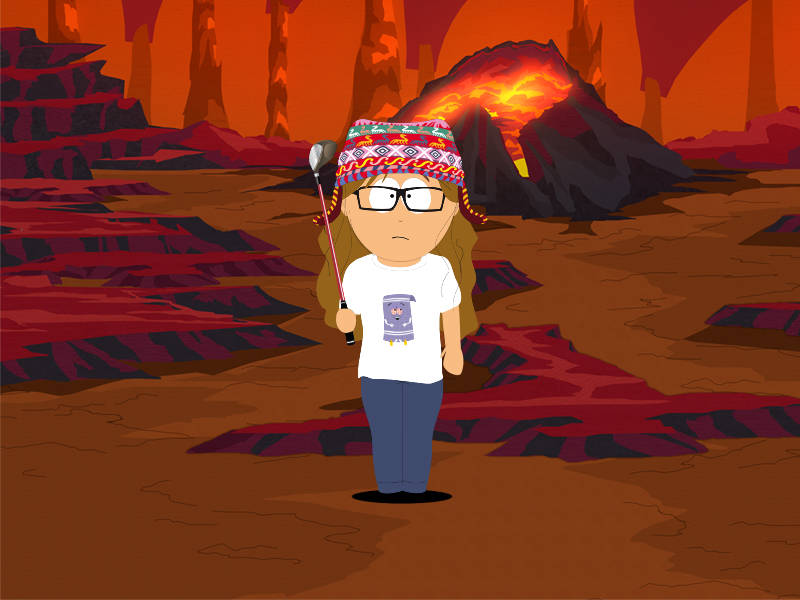 jacobus57
Not applicable
It looks like this app is available only for iPhones, which locks out users of other SmartPhone platforms, as well as those who do not have SmartPhones. Is there a workaround? If not, how can you justify limiting access to this contest to only Apple fanz???
91 Loves