When I initially signed up for CPR and First Aid training, offered by my Employer, Southwest Airlines, it was so I could be prepared to react if an emergency occurs. I secretly hoped I would never have to use these new skills. Little did I know, two days after completing my training, I would encounter an emergency situation where my skills would be put to the test.

On July 7, I stopped at a local gas station. I noticed a man chasing a red pickup truck that was coasting away slowly. Luckily, the man caught the truck and quickly opened the driver's side door, only to expose a man hunched over the steering wheel.

Watching this scene unfold, it immediately occurred to me that this was an emergency situation, so I grabbed my phone and ran toward the scene. As I ran, I tried to slow my brain down and remember what I was taught in my training.

First make sure the scene is safe.

When I ran over, I scanned the scene. I noticed traffic, but fortunately, there was a red light, which gave me the opportunity to run to middle of the street. The man who had run after the truck had already placed the truck in park.

As I approached the vehicle, I had my first good look at the man in the truck, and got up close enough to tap him and ask if he was ok. It was clear he was not. In fact, he was unresponsive and making a gurgling sound. I called 911 as other concerned bystanders gathered in the middle of the street. I handed my phone to someone else as men moved the man to the ground allowing me to initiate CPR.

In that moment, my training all came rushing back to me. I moved my hand over his chest to find his sternum. “Oh my gosh,” I thought. “Am I really doing this?” The 911 operator stayed on the phone and provided guidance as I initiated chest compressions. I was focused! Referring to what I learned, I knew to keep the compressions at least two inches deep and to perform at least 100 compressions per minute. As the rhythm guide for CPR compression timing, “Stayin’ Alive,” played in my head, I couldn't help but feel empowered by what I was doing.

This man was fighting for his life. I added my own step to my training: prayer. By now, a community of people rallied around this man. From the crowd, someone yelled that they were CPR certified, and a nurse placed her hand on my shoulder to reaffirm that I was doing fine. It was unbelievable that just two days ago I received this critical training from my employer. It was truly fate that I happened to be at the right place at the right time and knew exactly what to do to help this man. What was even more unbelievable to me was that I actually did it. I saw the need and was able to step in and help without hesitation.

The paramedics responded very quickly—only seven minutes later. They worked on him for a bit and were able to get him to respond. I cried tears of joy. Because of my training, I was able to truly affect this man’s life and his chance of survival.

There are no words to explain how thankful I am for the Southwest Airlines Initial First Aid and CPR training. I believe that my actions helped to save this man's life that day, and I know in my heart that every time someone is taught the skills I was, they, too, have the ability to save lives. 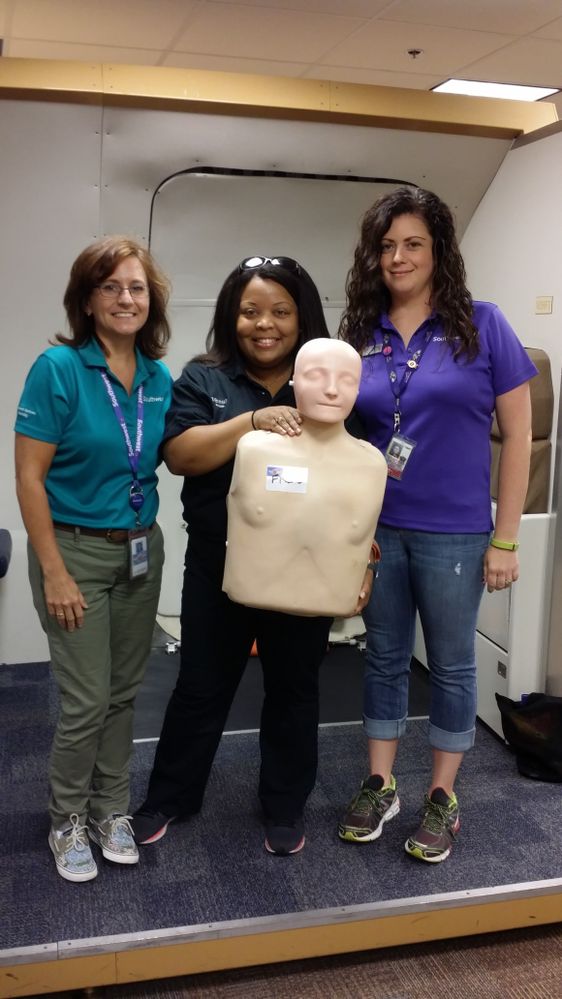