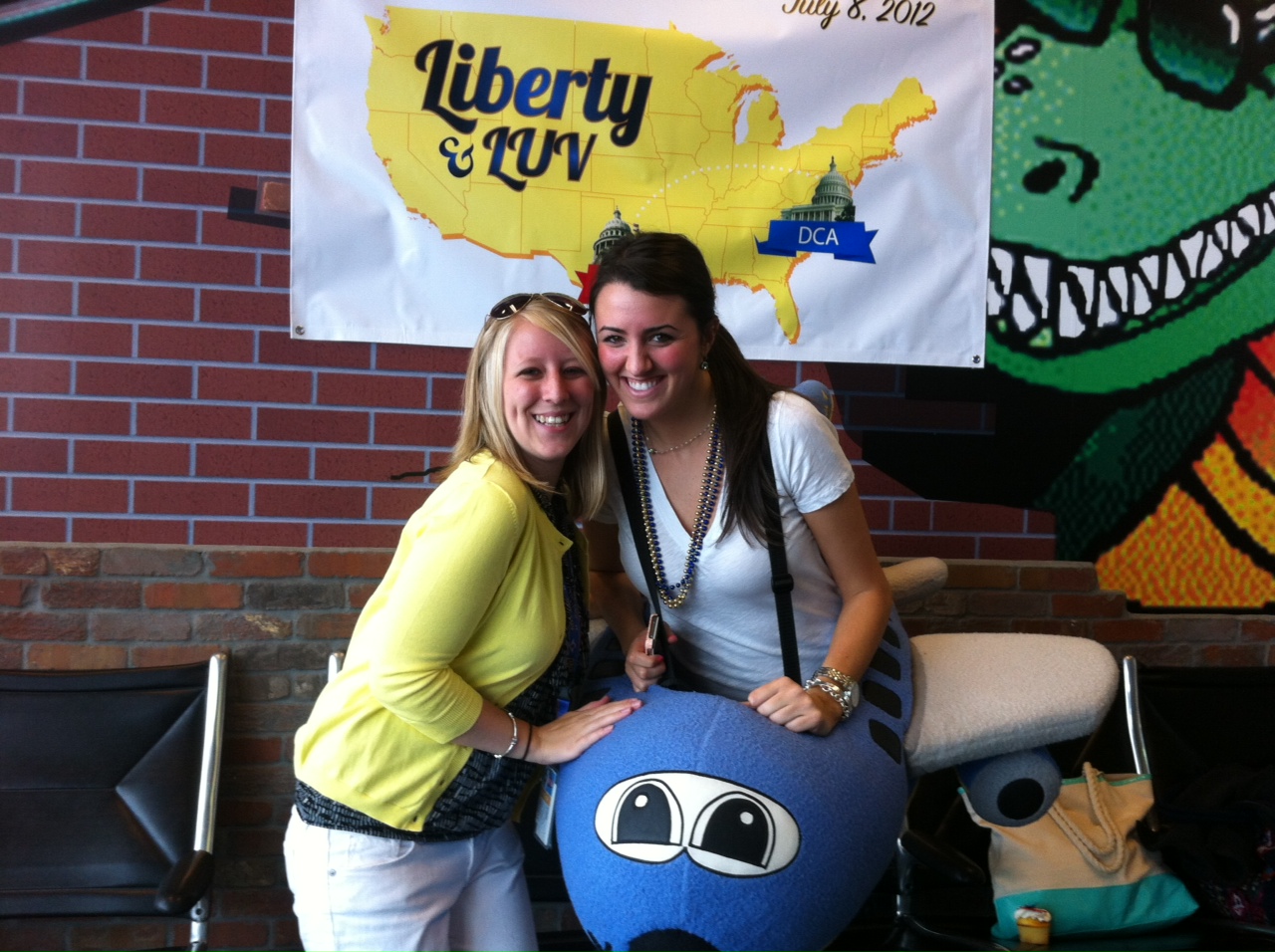 Southwest proudly introduced new service from Austin Bergstrom International Airport (AUS) to Ronald Reagan Washington National Airport (DCA), on Sunday, July 8th! As the only carrier to fly this route, it is one of a kind, connecting Capitol to Capitol for the very first time. Needless to say, we are pretty excited about it here at Southwest! We have been chronicling the opening events, so follow along for updates! 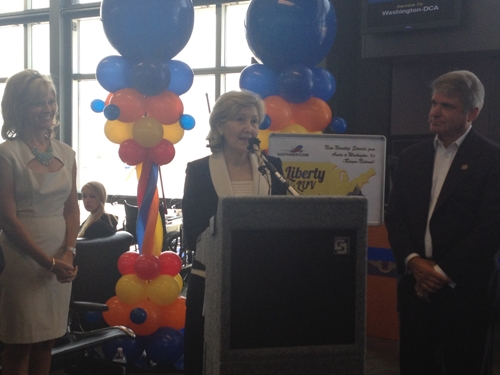 Dr. Bill Cunningham, presiding Director of the Southwest Board, also spoke at the press conference, where he expressed gratitude for our unique customer relationships and congratulated hardworking Southwest employees for the effort they put forth every day of the year.

The press conference was concluded with a ribbon cutting by Senator Kay Bailey Hutchison. 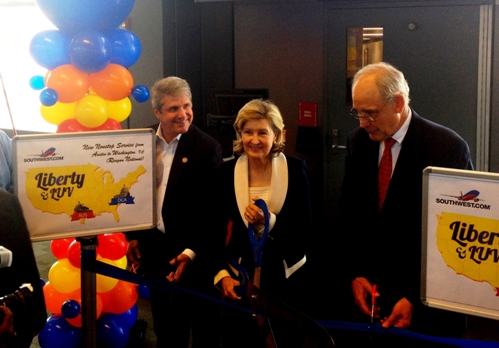 Passengers were delighted with the press conference and send-off celebration. Before boarding Flight 4114 we surprised one lucky passenger with the giveaway of two green roundtrip passes – good for travel on any Southwest flight.

As passengers waved their Texas flags and said goodbye to Austin, the departing flight left to a water cannon salute, signifying the end of our two-day opening celebration and the beginning of a route that will make travel history. 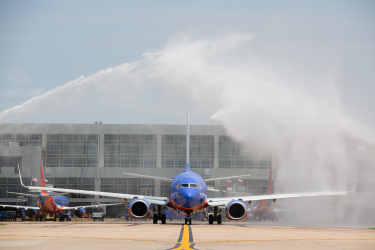 A full flight took off from Austin Bergstrom International Airport (AUS) to Ronald Reagan Washington National Airport (DCA) yesterday, and the passengers and crew couldn’t wait to share their Texas spirit with Washington D.C. on this opening route.

At the mention of cupcakes, passengers were already getting into the celebratory spirit with us. But, when our mascot, Spirit Jr. made an appearance, the excitement turned into a full on Southwest Party.

The highlight of the games had to be “Spirit Jr. Says” a Simon Says spinoff with airplane themed motions. Kids from the flight were thrilled to play along with Spirit Jr. and as she “took off”, “landed”, and “spread her wings” for flight.

Baggage tags, Texas flags, lunchboxes, and travel sets were among the many prizes handed out throughout the celebration.

Down on the ramp, employees were welcomed to celebrate the new service opening with a Kona Snow Cone, to cool them off as they worked in the hot Texas weather.

It wasn’t long before it was time for boarding, and for us to say goodbye to our inaugural flight. But there was one last little bit of Southwest LUV left to share before departure. As the flight was holding for connecting passengers, Captain Bill Martin displayed his servant’s heart by treating those waiting on the flight to a snow cone, fresh from the employee celebration that had been happening down on the tarmac. Flight attendants and Southwest crew worked quickly to serve over 100 passengers their treats before preparing for takeoff. 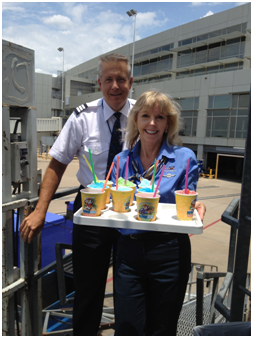 As a Texas flag waved from the cockpit, the flight began its journey to our Nation’s Capitol, as the first of many flights to come. Check in later, for information on our press conference and the ribbon cutting that officially opens this nonstop route! 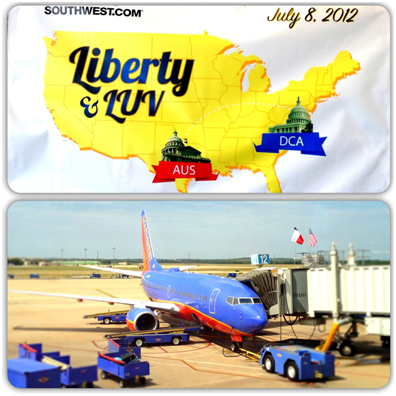 The AUS to DCA route was not an easy one to come by. For months, Southwest competed against other carriers in a grassroots effort to win the route. We rallied political dignitaries, Employees, and Customers to voice their support, sign petitions, and write letters in Southwest’s name. We even created a website and our own campaign logo, “Liberty and LUV,” to support the effort.

Today, we can’t help but be in high spirits as we wait for our first flight to take off. And the work doesn’t stop there! Toting 30lbs of cupcakes and a 45lb suitcase full of prizes, we have come ready to celebrate with Austin passengers, employees, and crew.

Soon, we'll share updates as we keep Liberty and LUV rolling throughout the next few days. Be sure to check back tomorrow, as U.S. Leaders, airport officials, and Southwest Employees all join together to formally introduce this great new route! 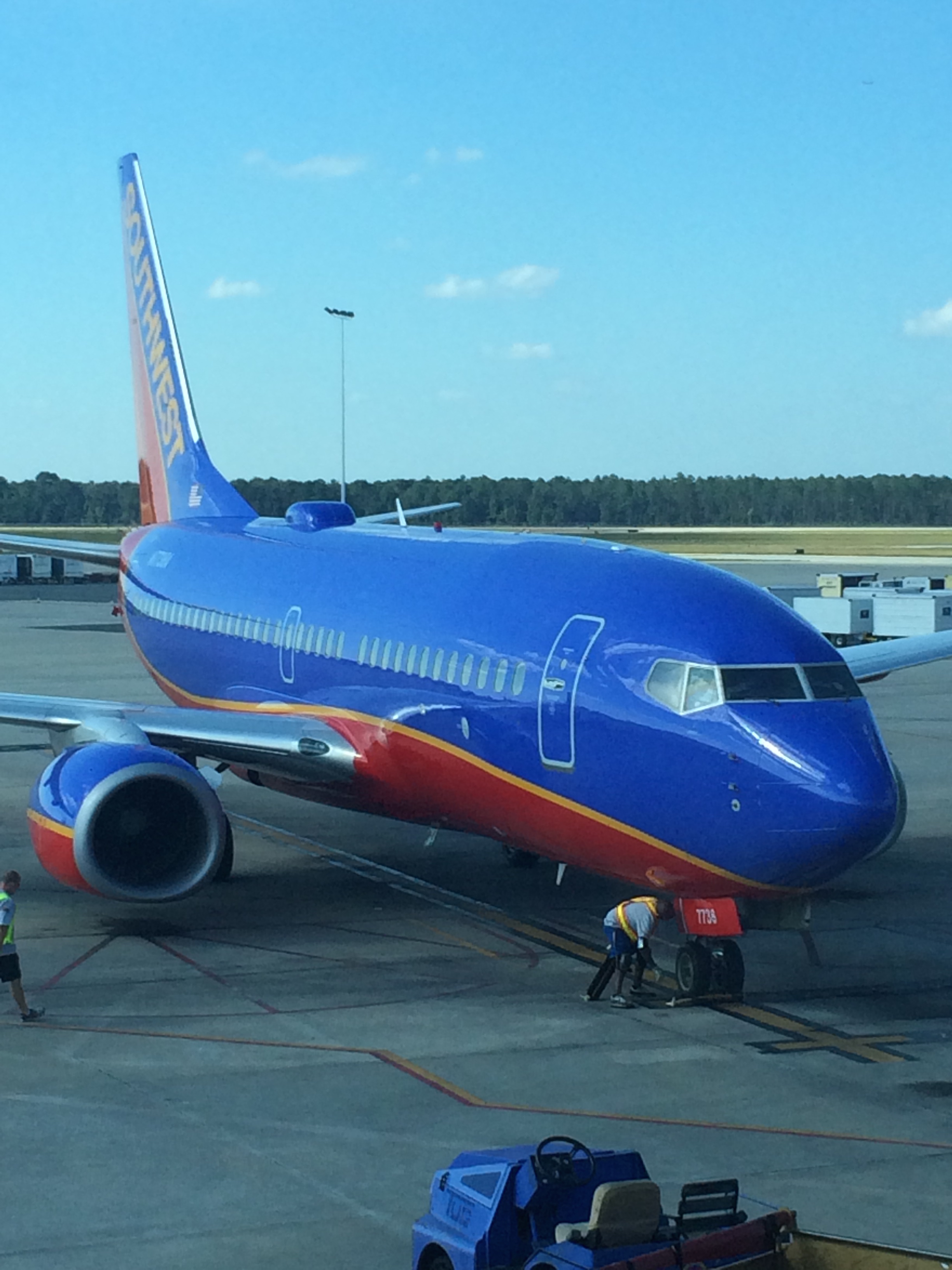 mikebarnbaum
New Arrival
This is so Great!! As mentioned, it took a great deal of work, and effort, which in the end has paid off!! Now Southwest and the DCA Airport need a new Capitol-to-Capitol with flights from Sacramento to DCA and back again. I recognize that the AUS-DCA Schedule actually originates at SAN in Southern California. Perhaps as a first step to SMF-DCA Nonstops, I would propose for now in future schedules a SMF-AUS-DCA that would stop in AUS in both directions, but not involve a change of planes. How does this sound? I think that Sacramento would accept of this to start with. It is much better than what exists there now. Believe Me. Thank you for rerading this blog post and taking this suggestion into consideration for future scheduling. Sincerely, Mike Barnbaum, Blogger & Rapid Rewards Member in Sacramento, California
27 Loves