Every Seat Has A Story: Our Very Own ‘Southwest Picasso’ 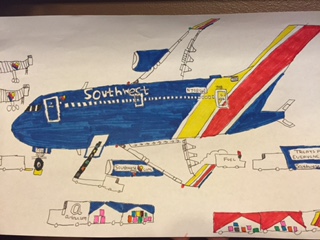 My 16-year-old son Clark, who goes by the nickname Jr., loves airplanes. A few years ago, a friend sent Jr. some Southwest swag that started his fascination with all things Southwest. Jr. has Asperger’s Syndrome, which is a form of autism. Although it can be challenging, the Asperger’s has allowed Jr. to become a walking encyclopedia of aviation knowledge. While we haven’t flown as a family too often, my generous grandmother sent us some money to take a trip this past summer. Jr. and his brother Grant decided that flying to Florida to see Mickey and his friends was the number one trip on their list. 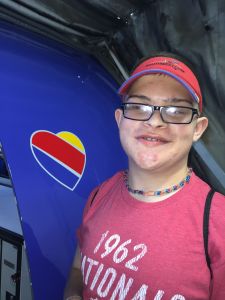 We only had to wait a few weeks to board that 737-800 (Jr. told us what type of plane it would be) to travel to Florida, but it might as well have been 10 years to Jr.  He wore his Southwest sun visor every day (everywhere but the shower) until the big day. Jr. also drew the Pilots a picture of the aircraft we would take to Florida. We talked about the delivery of his artwork to the Pilots for days, and in the back of my mind, I started to prepare myself for the discussions we would have if it was not received like he imagined. Fortunately, Jr. has a big heart and tends to rebound very quickly. 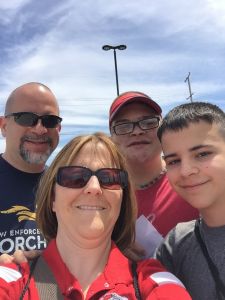 On the day of our departure, Jr. was so excited he could hardly sit still. We found out from the gate agent that Jr. could pre-board with his mother, Karla. Once onboard, Jr. asked a Flight Attendant to give his picture to the Pilot, and she told him that he could do it himself! We were so blessed that she could see how much that picture meant to Jr. and gave him the opportunity to deliver it in person. Jr. then spent a quick minute talking with the Pilots while sharing his drawing.  He was thrilled and so proud that they were interested in him and his work. 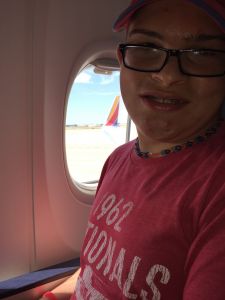 After we all had boarded, the Flight Attendant began her safety announcement, but when she neared the end of her speech, she said she had one more thing. A few seconds later, she held up Jr.’s drawing for all to see and mentioned that he had drawn the picture for the Pilots. She went on to say thank you for his efforts and even called Jr. a "Southwest Picasso." The plane erupted with cheers and applause, and some nearby Passengers congratulated Jr. on a job well done. This was a wonderful start to a great time in Florida visiting Disney World, the Kennedy Space Center, and just relaxing by the pool. Southwest talks about their dedication to the highest quality of Customer Service, and so often you think companies just say things like that because it is expected. We are so glad we found Southwest's quality Customer Service is achieved by having caring and compassionate People working for them. The Flight Attendants and Pilots took a few minutes from their busy day to make our son’s year!  It was his 15 seconds of fame.  We just cannot thank the people of Southwest enough. We will be traveling Southwest every time we can fly.
13 Loves