Evolving Cities: Reach for the Sky(line)! 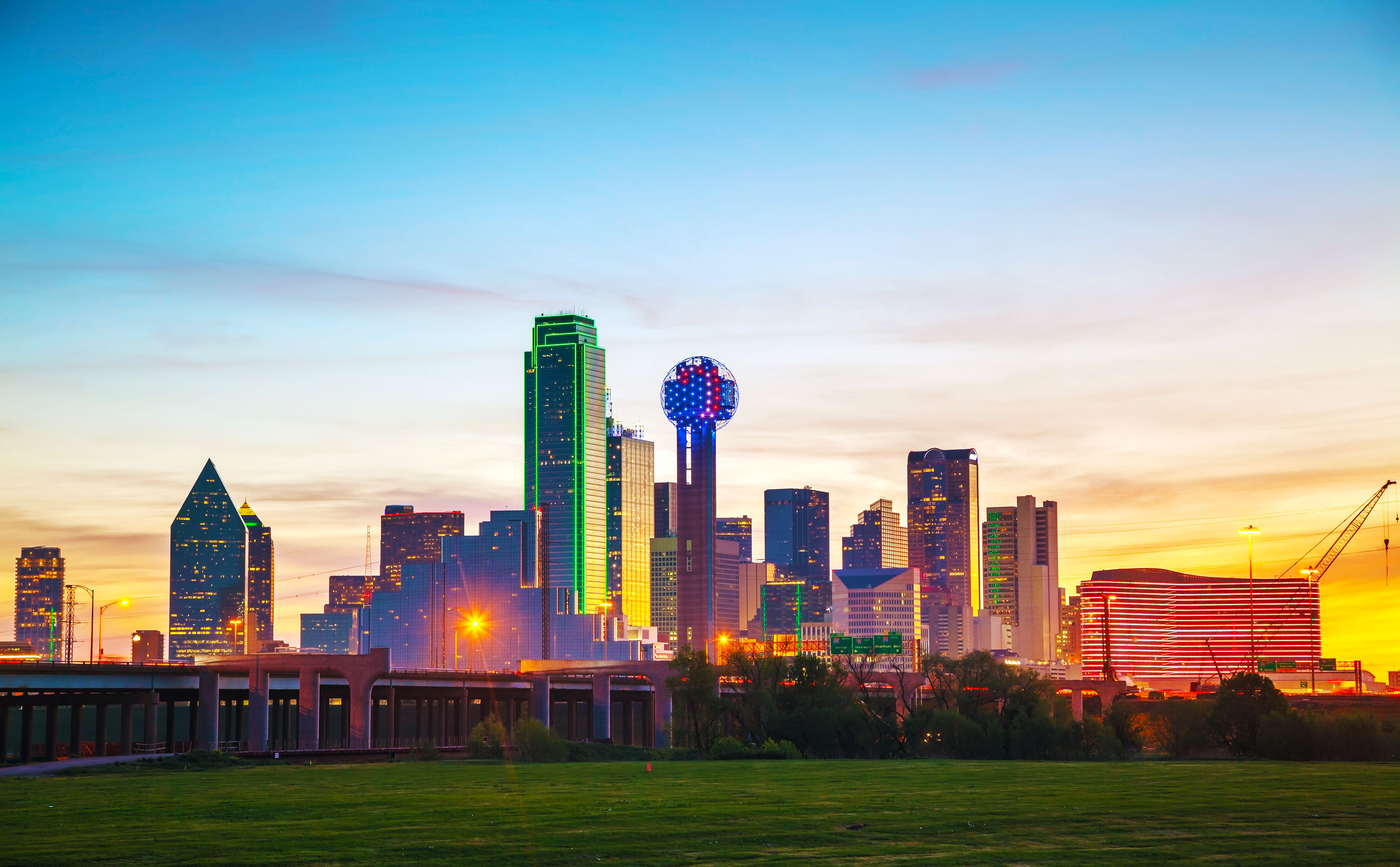 Skylines. Every large city has one, every smaller city wants one. They are the statement of “who” a city is and who it aspires to be. And it sparks as much debate as whose sports teams or local food is better! But “better” is a subjective matter, coming from the eye (and heart) of the beholder. As a longtime airline Employee I know one thing I always remember about a city (besides the airport) is that city’s skyline. After looking at other “best skyline” lists and going through my own memories, here is my top 10 skyline list (in Letterman order), based on three subjective lists and a heavy dose of opinion thrown in. I’ll also include factoids about each skyline if available. (Rules: Cities on this list must be in the United States and must be served by Southwest Airlines. List based on those by thrillist and by USAToday; additional history based on my memories and the book Skylines: American Cities Yesterday and Today by Goodspeed, Gjevere and Blakeway) 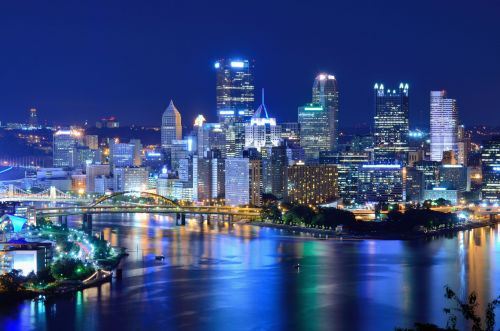 #10. Pittsburgh: At the point where the Allegheny and Monongahela Rivers marry to create the Ohio River lies a beautiful surprise—downtown Pittsburgh! It’s a de-facto river “island in the stream” filled with gleaming glass and steel towers of every architectural style, all crammed close together. I dare anyone to pop out of the Ft. Pitt Tunnel and catch their first glimpse of Steel City USA and not gasp! In fact, much of the steel used in the construction of these skyscrapers was manufactured by the U.S. Steel Corporation, which is headquartered in the tallest building in Pittsburgh.  Clad in dark glass with an exoskeleton of steel, the metal supporting the building was designed to beautify as it aged by acquiring an ever-deepening patina of non-destructive rust (which was a very 1960’s design technique). Add the surrounding lush hills which frame the downtown area and you have an under-appreciated selection at #10 on our list!

#9. Las Vegas: Okay, it’s hard to call the buildings that line the Strip a true “skyline.” They’re basically all the same height because of their proximity to the airport, but there the similarities end. The compilation of mega casino resorts that line Las Vegas Boulevard of every architectural shape make up a veritable trip around the world, from the Pyramids to the Eiffel Tower to NYC, with much fantasy in between. These architects know how to get their message across, and the message is  “SPEND MONEY HERE!” But it’s by night that the city shines brightest, when the Las Vegas skyline shimmers in the desert darkness with each building lit up like a Christmas tree on December 24th.  But, hey—it’s Vegas, baby! 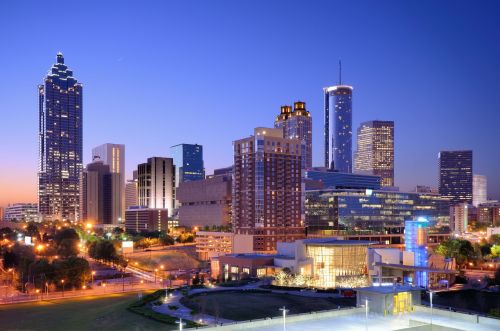 #8. Atlanta: In the South, one wants to blend in, yet display a touch of flair. Nowhere is that more evident than in downtown Atlanta, where every street seems to be named “Peachtree” and every skyscraper seems to be adorned with some sort of spire or feature. What makes them all work as a cohesive and beautiful skyline is their variety. There is something for everyone! Just like the city they anchor, the diversity of Atlanta’s skyline components run the gamut, from the slender round glass Westin Hotel to the gothic spires of the Bank of America and One Atlantic buildings. Find a shady spot in Centennial Olympic Park, then soak in the modern, edgy skyline view of the #8 pick, Atlanta. 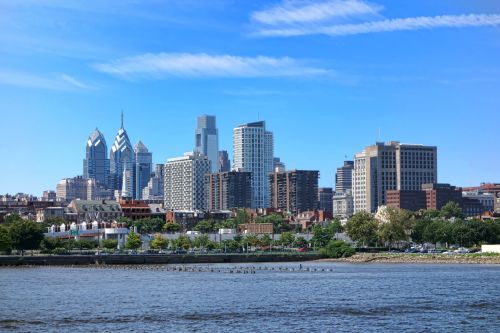 #7. Philadelphia: For many years no building in Philadelphia could be taller than or block the view of the statue of William Penn atop Philadelphia City Hall. So, no downtown Philly skyscrapers are older than the mid-1980s, which is when developers crashed through “Penn’s Ceiling." Now, downtown Philly contains many super tall visual allusions to hypodermic needles, thumb drives, and the occasional glass box—all watched from below by William Penn, who is remembered by history but has been eclipsed by construction. The skyline is also the most compact skyline on this list which makes it a walker’s dream, and so easy to look at as you eat your cheesesteak at Pat’s or Geno’s. 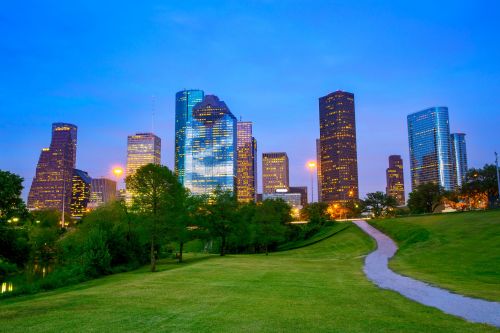 #6. Houston: Energy City has perhaps the oddest collection of skyscrapers in America. Where else can you find a skyscraper topped with a faux Mayan temple? Or how about one of the most honored modern skyscrapers in the world, which looks like three buildings of increasing height bolted together, each topped by dozens of little imitations of the gargoyles atop Dutch canal houses? Downtown Houston’s skyscrapers are named for civic leaders old and new, energy firms thriving and extinct, and the occasional boring street address. Still, despite its diversity, downtown Houston is world-class bold and beautiful and even more so when viewed from Sam Houston Park. It’s a breathtaking and futuristic skyline—very much befitting the city named for the first word ever transmitted from the Moon to Mother Earth. 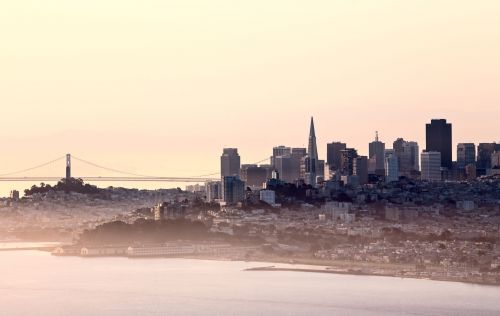 #5. San Francisco: Most of us have left our hearts in San Francisco, where the little cable cars climb halfway to the stars. But, because The City (they capitalize the T and the C) is spread across steep hills, the skyline of Fog City can be surprisingly misleading. For example, the iconic Transamerica Pyramid, which sits at sea level, appears from a distance to be the same height as 555 California St., a building which is 100 feet shorter but sits on much higher ground. Fun fact: Triple Five” California was the building used as the basis of the fictional “Glass House” in the 1974 disaster flick “The Towering Inferno." Still, illusions aside, the San Francisco skyline is a tightly-clustered group of buildings lining Market and California Streets and is made up of every imaginable style, some unique in the world, and is easily seen and photographed from the nearly any angle. If you want to see it destroyed, watch the really bad movie, “San Andreas” staring “The Rock." Better yet—grab some sourdough and a bottle of white, climb Telegraph Hill, and enjoy the San Francisco skyline in the shadow of Coit Tower. 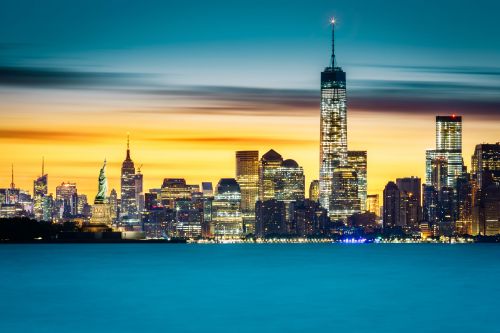 #4. New York: Volumes have been written about the jaw-dropping Manhattan skyline, or skylines—these days it’s more than just one. Lower Manhattan, best seen from the Brooklyn Promenade or better yet from the Hudson River Line, is maybe the most iconic cityscape on the planet, and new buildings are adding their own style and modern verve to the downtown area annually. Midtown, from roughly 35th St. up to Central Park, is where you’ll find old favorites like the Chrysler and Empire State buildings. But now, Midtown is HOT—as of this writing there are 18 buildings proposed or under construction in Midtown that will top out at or over 1,000 feet! Still, the beauty of the NYC Skyline is spread out over a lot of real estate, which prevents an immediate and singular “OMG!” and knocks it out of the #1 spot. Like the city itself, New York’s skyline has to be unlocked one building (or neighborhood, or bar, or restaurant) at a time ... and nothing is more fun for an architecture junkie! 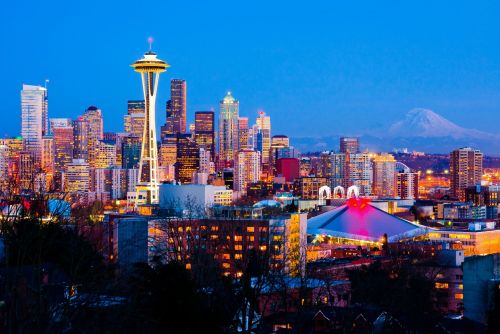 #3. Seattle: It’s hard not to love a skyline that falls nearly 700 feet in elevation from the I-5 to the waterfront, is bordered by the Space Needle on the North and world-class stadiums on the South, and has snowy, shadowy Mt. Rainer keeping watch of the city from the South on clear days. Views from the top of the Needle are amazing, as are those from the top of the Columbia Tower (the dark-brown glass one that’s the current title holder of “tallest” in Seattle—taller ones are coming!). But not all of the tallest structures are made up of new construction. The very slender white tower on the South end of downtown, which is now known as the Smith Tower, was built as the headquarters of the Smith and Wesson company and opened in 1914.  Wild Wild West indeed! 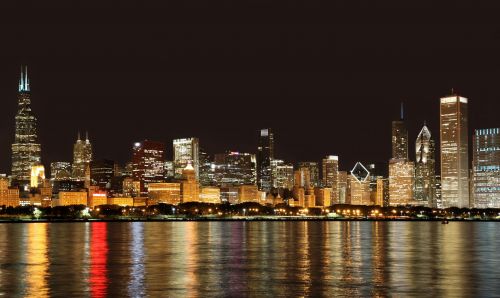 #2. Chicago: “Second City” is actually the first city in the world when it comes to architecture and skyscrapers. In fact, the word “skyscraper” was re-purposed in the late 1800’s to describe the ever-climbing early Chicago skyline, home of the first skyscrapers. “The Loop” contains dozens of older high-rises by architects like van der Rohe, Kahn, Sullivan, and SOM, joined by newer, taller ones like The Studio Gang, Pelli and Hadid. What might be even cooler is what’s not there, as there have been many buildings never built that would have really set archinerds’ tongues a’wagging, such as The Spire by Calatrava or The Illinois by Wright. It’s the diverse, large and historic collection of high rises that puts Chicago high on any skyscraper list, and for good reason—it’s enough to make you want to return to the Windy city again and again. That, and the hot dogs at the Billy Goat Café. 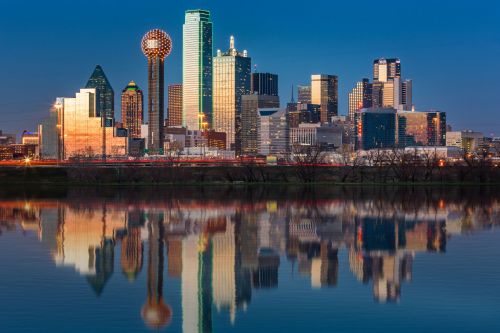 #1. Dallas: Okay, this was NOT my doing; Dallas was named #1 in a USAToday poll. You can argue on the validity of any poll conducted by McPaper, but the fact is that Dallas came in #1. And I can give you three reasons why my hometown won. One, it’s a very compact, viewable cluster of skyscrapers with several “anchor” whiz-bang structures, such as Reunion Tower, the B of A Plaza (the Green Rocket), and the Chase Tower (the one with a hole in the top). Two, because of constant growth. The construction crane is our official bird these days. The view is always changing, especially for visitors that don’t see the skyline every day. And three, most importantly, Dallas is the most “lit” skyline in the world. Many of the major buildings downtown have some sort of external (and colorful) lighting built into them, from the new Omni hotel, which can actually scroll messages depending on who pays for them, to the campiness of the “ball” atop Reunion Tower, to the B of A “Big Green Monster” (which can change its colors into any hue in the rainbow). Now, truthfully, I expect this to be a “one-and-done” award, but you never know:  as the civic slogan says, Dallas is BIG ... who knows if we’ll prevail again!
2 Loves