When Southwest Airlines announced plans to fly to Hawaii in fall 2017, my family was very excited. We travel often to Hawaii and already love flying Southwest everywhere else, so it seemed like the perfect fit for our travel life. One of Southwest’s focus airports for Hawaii service is Oakland International, just a few miles from our house, which is even more of a bonus.

As luck would have it, Southwest’s Hawaii service launched just a few weeks before my children’s spring break vacations this year. We made it a priority to snag seats on some of the very first flights.

My husband, nine year old daughter, five year old son, and I flew from Oakland to Honolulu and back in the early weeks of Southwest’s first Hawaii flights. We had a very easy and enjoyable flight experience and are already planning to book more Hawaii flights on Southwest later this year.

Here are four reasons Southwest’s Hawaii service worked so well for us and why I think it will work well for many other traveling families too.

Like many Southwest frequent flyers, much of my travel on the airline is short trips with short stays when a carryon bag works just fine. However, when it is time to take a weeklong trip to Hawaii with kids, carrying on just doesn’t cut it. We needed to check some bags for this vacation!

My family always enjoys the pretzels and other snacks on Southwest flights, but we found the special offerings on the Hawaii flights extra fun. On Hawaii routes, all travelers receive a non-perishable snack box free of charge that includes Wheat Thins, Southwest pretzels, spreadable cheese, fruit snacks, and Tics-Tacs.

Later in the flight, there is a second snack service with Milano cookies. It was just enough food for the overall California to Hawaii flight time, with a number of choices that my kids would actually eat.

Pineapple juice is also on the complimentary drink menu, along with a special Hawaiian rum and beer for an additional charge.

Hawaii flights are a little longer than most routes Southwest flies, so we really appreciated the inflight entertainment portal to help pass the time. My son found a number of new, kid-friendly movie selections he enjoyed and my daughter binge-watched some of the Live TV offerings, both of which stream to your own device and are entirely free.

Meanwhile, I used the $8 WiFi to get some work done before the vacation really started. Southwest also offers free iHeartRadio music and messaging with iMessage and WhatsApp, so it’s pretty easy to pass the time quickly even on a longer trip.

Hot tip: Remember to bring headphones for everyone in the family. Also, consider packing a portable battery pack for phones or tablets that may run out of power with four or five hours of heavy use. 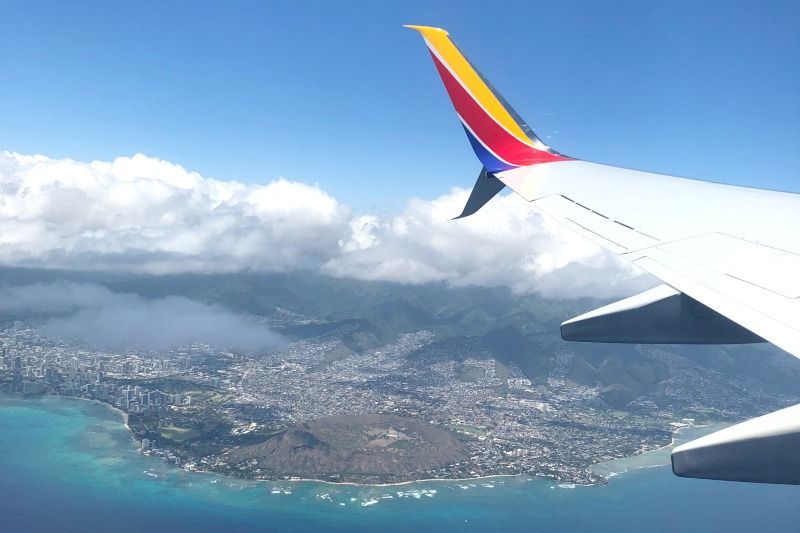 I’ve had quite a few unique views on takeoffs and landings flying Southwest as regularly as I do, but nothing beats the views in Hawaii. When we landed in Honolulu, we saw nothing but crystal clear turquoise waters out of the window. And as we departed (very sad our vacation was over), we saw magnificent views of Waikiki Beach and Diamond Head bidding us farewell.

Of course, the view will be different depending on which Hawaiian airport you are flying into, but it made me want to try another Hawaii destination. Maui has already been added to Southwest’s flight schedules since our trip and the Big Island’s Kona launched on May 12, so I’ll be watching for more travel opportunities on Southwest in the future.

If you are considering a flight to the Aloha state on Southwest, be sure to check out my complete Southwest Hawaii flight review with even more of the details about our flight experience from OAK to HNL and back.

Thanks for the tips.  We are going next weekend