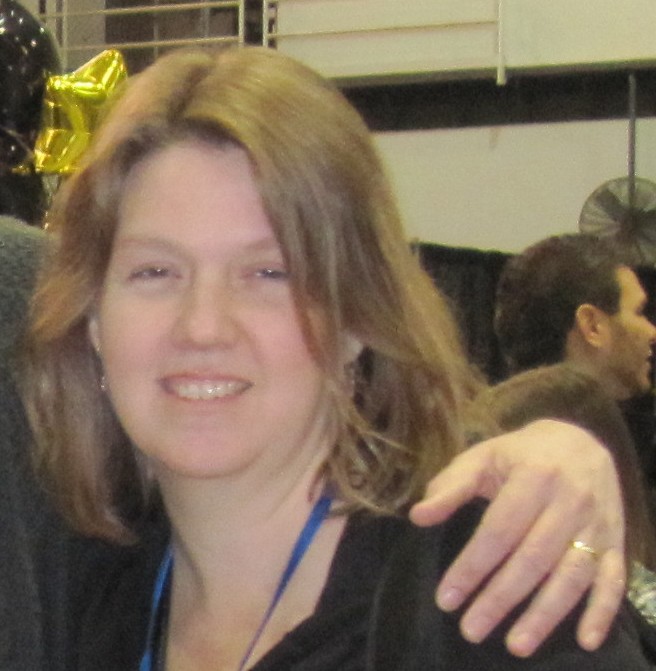 We could get used to this.

Day 4 began much like day 3. We awoke in a nice, comfy bed, showered, dressed, and checked in with the Kidd’s Kids staff. Afterward, we enjoyed another delicious breakfast buffet at the hotel with those bright, friendly, and always cheerful Disney characters, Pluto and Goofy. (Chip and Dale joined them this time as well.) And then, for the last time, we were off to the parks!

Unlike Saturday, a group event was scheduled for the morning. After breakfast, we caught a bus to Animal Kingdom where, as is tradition, all of the Kidd’s Kids and their families would watch “Festival of the Lion King,” a Broadway-style musical based on the movie. It didn’t take long for the already busy park to be flooded with over 160 people wearing matching t-shirts.

While we waited outside the theater before the show began, we chatted with a Kidd’s Kids family we had met in the hotel elevator on our first night. They are from the Dallas area, and like us, have a son with congenital heart disease who receives his care at Dallas Children’s. Although their son is a few years older than Anthony, there was an immediate bond between us because of our shared medical journey. We also learned that both parents are degreed musicians, like Ray and I, and that we have several shared acquaintances. We plan to stay in touch with them over the years.

We had heard only good things about the Lion King show, and it did not disappoint. Our only wish was that it had been longer! It was beautifully done with stunning sets, costumes, and choreography. Our family’s particular favorite was the female bird who executed spectacular aerial stunts, à la Cirque du Soleil. Abby was so impressed, she wanted a picture with the dancer when the show was over.

The finale of the show included several of the children from each section of the theater joining the cast for a parade around the circular stage. Some of the Kidd’s Kids who were seated close to the front took part, many of them in wheelchairs. It was beautiful to watch them experience this opportunity, especially with that soaring “Lion King” music as soundtrack.

The Kidd’s Kids families had an opportunity to mingle briefly with the actors after the show, and then a large group of us headed over to the Kilimanjaro Safari. Because there were so many of us and the park was crowded, our wait for a Safari vehicle was probably our longest wait over the entire three days we spent at the parks. No complaints, though. It was worth it.

The safari ride is a journey through the Harambe Wildlife Reserve as if on a savanna in East Africa. Disney’s savanna is 100 acres of natural terrain and all of the animals are free to roam. We saw giraffes, crocodiles, lions, flamingos, warthogs, a baby elephant and more. There was a moment when some giraffes were nearly close enough to touch. Beautiful. In true Disney fashion, a story line is threaded throughout the ride with moments of thrill and intrigue, including a rickety bridge, a washed-out road, and erupting geysers. 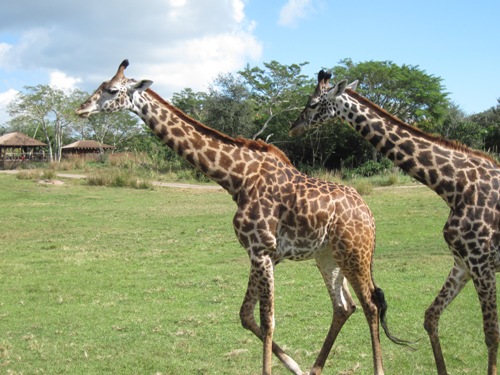 Although we enjoyed our time with the other families, when the safari was over we decided to go off on our own for awhile, knowing that we still had a lot of territory we wanted to cover before the day ended.

Our next ride was the Kali River Rapids. Samantha isn’t a huge fan of roller coasters, but she loves rapids rides. From what we saw of the previous riders, we were about to get soaked! Once again, I thought about those five rain ponchos they gave us on our first night. The ones that were still in the gift bag back at the hotel.

As we headed into a 30-foot drop down a waterfall, Ray and I assumed we were going to get the worst of it as our side of the circular raft was going to go down first. At the last moment, however, the raft turned again and the two guys next to us were the ones who were doused with a giant wall of water when we hit the bottom. They were drenched, while the rest of us were only slightly wet. I’m not sure whether the kids were relieved or disappointed!

Next we rode a roller coaster called Expedition Everest. The cars go forward and backward through an artificial, but beautiful, mountain while a yeti “tears up” the track. It is fast, with a gorgeous view of Animal Kingdom during its initial ascent and an exciting drop at the end. Not surprisingly, Anthony and Abby rode it twice after which Anthony proclaimed it as one of the best rides of the trip. Our sweet, thrill-seeking son.

Anthony did eventually find something that scared him, though. After a dizzying, brain-shaking spin on the Primeval Whirl—wow!—Abby, Anthony, and I went on DINOSAUR, a turbulent ride on land rovers back to the time of dinosaurs. The life-size, animatronic dinosaurs elicited screams from Anthony and caused Abby to keep her head down and her eyes closed for the entire ride. Afterward, there was not a single “I want to do it again!” from any of us!

As we were leaving the park, we were surprised by a mother and her young daughter who approached us. The mother gestured to our t-shirts and told us that she donates to Kidd’s Kids.

What do you say to someone who made it possible for you to enjoy a trip of a lifetime with your family? What words could possibly express the extent of our gratitude? A simple “thank you” seemed not enough, but it was all we had to offer.

This woman wasn’t the first. We already had been approached during our stay by people who had contributed, one of whom was a Disney World employee. It was incredibly humbling to meet these people whose generosity brought us there. We later learned that many donors plan their own trips to Disney World around the Kidd’s Kids weekend just so they can see their money in action.

After thanking this mother and daughter as best we could, we left Animal Kingdom and spent the rest of the day at Epcot and Magic Kingdom. Travel between the parks takes some time, but it is relatively easy to get from one park to another. And the chance to sit down and rest was always welcome!

By the time we arrived at Epcot it was near dark, but we still managed to experience most of it. The Test Track was our favorite, riding it twice in a row. The ride takes you through some of the tests GM performs on all of its vehicles, culminating in a 60 mph open-air drive around the track. It was exhilarating and one of our favorite rides of the entire trip.

We finished our time there by walking through Epcot’s World Showcase--pavilions representing eleven countries centered around the lagoon over which we had watched the fireworks on Friday night. These areas are beautiful, depicting the architecture of the country they represent. The next best thing to traveling the world!

When Epcot closed for the night, we headed back to Magic Kingdom. Yes, we were tired. Yes, it was late. But we all agreed we wanted to squeeze as much fun out of this trip as possible.

Magic Kingdom was open for the general public that night until midnight, but for resort guests it stayed open until 3 a.m. On Friday morning, Dr. Kevin had encouraged us to take advantage of those late hours if we had the energy because the crowds would be smaller. He said, “Do as much as you possibly can. You can sleep when the trip is over.”

After contemplating our many “all-nighters” at the hospital with Anthony over the years, we took his advice. Staying up most of the night riding rides at Disney World would be a breeze compared to that!

During the night, we met and talked with one of the Magic Kingdom maintenance coordinators. After complimenting him on how clean the parks were, he told us that when the park closed, the streets would be flooded with workers ready to clean every inch of the park and to repair anything that needed to be fixed. He said, “Even if there were a 10-foot hole in the middle of the street, we’d have it fixed before the park opens again at 8 a.m. and you’d never know it had ever been there.” Impressive!

We stayed at the park until 2:30 a.m., enjoying some things for the first time--Wishes Nighttime Spectacular (a dazzling fireworks show), Main Street Electrical Parade, Peter Pan’s Flight, Snow White’s Scary Adventures, Swiss Family Treehouse, and Prince Charming’s Carousel; and some things for the second time—Big Thunder Mountain Railroad, the Magic Carpets of Aladdin, Buzz Lightyear’s Space Ranger Spin, and Splash Mountain. Due to technical difficulties, Ray, Abby, and Anthony got stuck on Splash Mountain, near the giant drop. While Samantha and I stood worrying at the bottom, none of them seemed to mind. Since the maintenance crew turned on the inside lights, they enjoyed seeing parts of the ride people would not normally see, like hidden doors, staircases, and ceiling tiles. A peek behind the curtain!

Anthony desperately wanted to ride Space Mountain again, but they, too, were having technical difficulties that night. This ride was his favorite, and he still is sad he never got to ride it a second time. I am, too.

We discovered we weren’t the only Kidd’s Kids family who stayed out late that night. We ran into several others as well as Tim Halperin, Dr. Kevin, and one of the staff nurses during those wee hours. Even Anthony, who normally has endurance issues, was going strong until we all hit a wall around 2:00 a.m.

After finishing a little bit of souvenir shopping, we went back to the hotel, knowing we had done everything we wanted to do.

Yes, we definitely could get used to this. 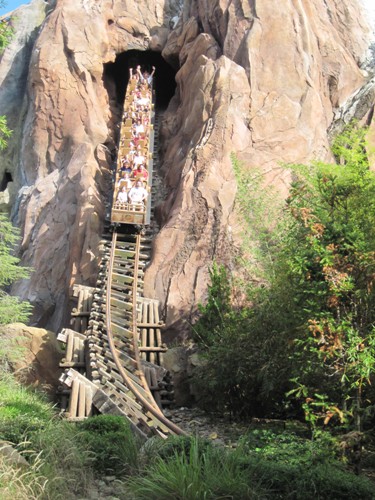