Flash Forward—Part Four: The Continued Progress of Our First 737-800

In our last installment, the future N8301J was in the first position of the moving assembly line at Boeing’s Renton, Washington, assembly plant.  It's really incredible to me that it's possible to assemble a bunch of metal and other materials into a machine that will not only soar safely through the heavens, but it will do it in rain, snow, and extreme heat for the next 20 years or so.  In this next batch of photos from our good friends at Boeing, our first 737-800 has moved forward to the next spot on the assembly line. 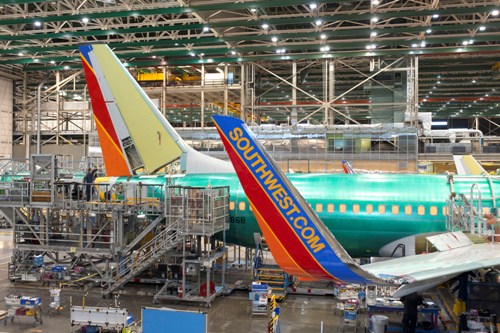 The vertical stabilizer has been lowered into position and attached to the airframe.  Several items of interest are in this photo:  The wing jig is still attached to the fuselage.  You will notice that the rudder has already been painted.  Rudders are kind of like car tires, they have to be carefully balanced, and adding paint later can disrupt that balance.  When you see construction photos of unpainted aircraft, their future owner is often revealed by the paint on the rudder.  And, the aircraft also wears a temporary registration number (part of which is visible next to the scaffolding) that is used by Boeing until the permanent registration (N8301J) can be issued. 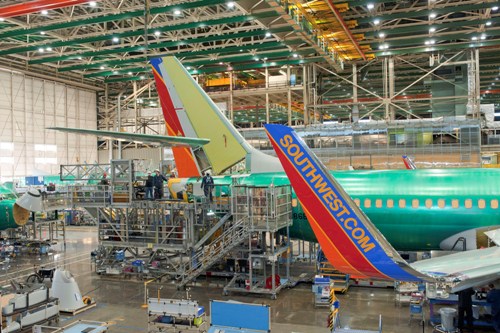 After the tail is installed, the next visible construction step is the horizontal stabilizers.  The right stabilizer is being lowered into position by the overhead crane.  Compare the configuration of the scaffolding in this position with that in the previous photo.  Part of the scaffolding side has been removed to accommodate the stabilizer.  In the lower left corner of the photo is a tail cone with the APU (auxiliary power unit) exhaust.   Also in this view, the trademark Boeing “double bubble” fuselage design is evident.  You can see a darker line running along underneath the windows from the wing root back to behind the winglet.  The fuselage is actually two circular sections attached one on top of the other.  The 707 was the first aircraft to utilize this design, and it made the cabin area wider than the original oval design of the Dash-80 and the KC-135. (The Dash-80 fuselage couldn't accommodate three-abreast seating.) 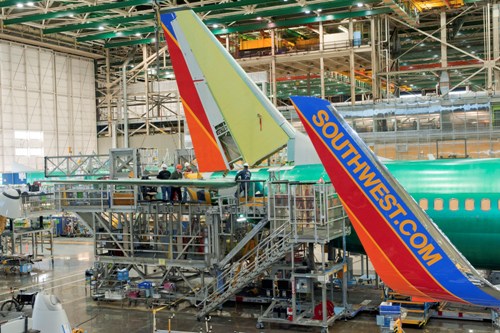 Boeing workers maneuver the horizontal stabilizer to its correct position on the rear fuselage.  Two workers are aligning this appendage.  Notice that the assembly floor of the Renton plant is spotless.  The floor is so shiny that it reflects the image of the items in the factory. 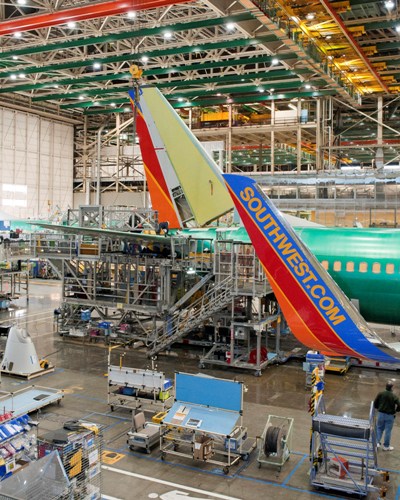 At last, the stabilizer is in position, and workers are attaching it to the fuselage.  It looks like it is still attached to the overhead crane—the block and tackle is just above the top of the tail in the photo. 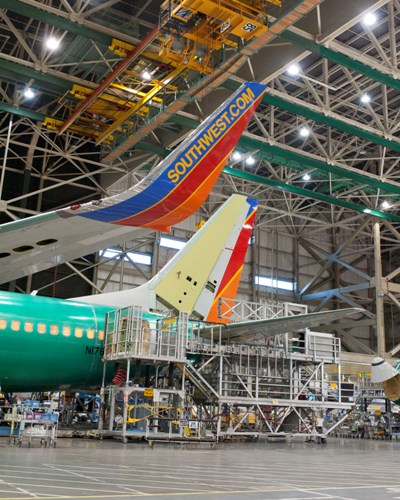 The left horizontal stabilizer has also been attached.  The temporary Boeing registration is visible in the photo, and we get a look at the ceiling of the plant.  One of the overhead cranes is above the aircraft.  By now, the future N8301J looks like an airplane.  There are still some major steps to come, however, and among those are installing the landing gear and engines, plus hundreds of smaller items.  Stay tuned…