Flash Forward—Part Seven: It’s an Airplane! The Continued Progress of Our First 737-800

When I got this batch of photos from Boeing, I was really excited, and I hope you will be too.  All that metal and hard work seen in previous photos has come together to produce our first 737-800.  Before I get into the fun, I think a word of thanks to all the Boeing workers and those of their suppliers like Spirit Aerospace in Wichita is appropriate.  Their efforts and dedication give us the means to serve our Customers and for us to earn our paychecks.  Colleen is fond of saying:  “We are in the Customer Service business, and we just happen to fly airplanes.”  That is certainly true, but oh, what airplanes we fly.  Also, thanks to Tim Bader in Boeing's Public Relations Department for being our photo correspondent. 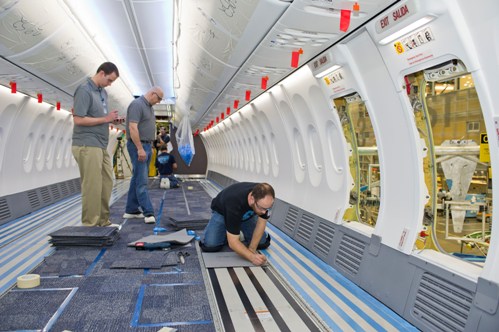 My Coworker, Marilee McInnis, will be thrilled to see these next two photos.  In the one above, we see workers installing the new environmentally friendly carpet that is also part of our Evolve interior program for our 737-700s.  And because the carpet comes in squares, we don’t have to replace a long strip of carpet for just one bad spot.  In previous installments, some of you have asked about the PSUs (passenger service units), and this is a great perspective about how they look.  Also note that the Sky Interior ceiling has been installed, and it looks like the mood lighting is already at work. 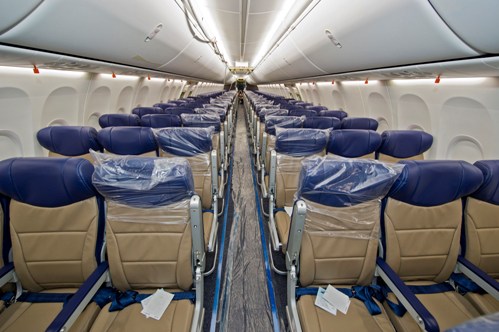 With this photo, the cabin looks pretty complete.  Our new seat style with the lower profile and renewable seat covers has been installed, and for those of you who haven’t been fortunate enough to fly on a factory-fresh airplane, this step also marks an olfactory milestone—it now smells like a new airplane.  That sensation is very similar to the “new car smell.” 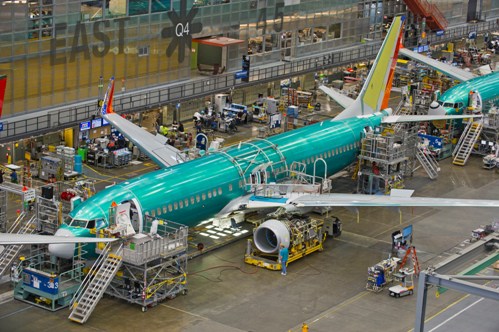 It’s been a while since we saw the outside of the airplane, but it now is looking pretty complete.  The General Electric CFM-56 engines are being installed, the entry doors have been attached, and the radome secured. 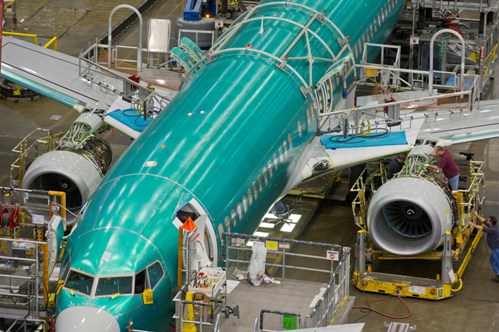 This close-up provides a good look at all the construction structures that surround the aircraft.  The white panels on the ground underneath the wing root are lighting that illuminates the bottom of the fuselage.  A technician is working at the top of the engine on the left wing. 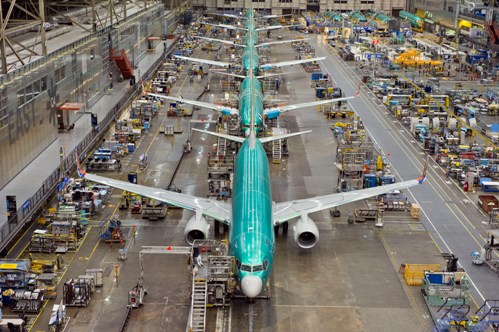 Our first 737-800 nears the end of its journey through the assembly hall, and we can look back at the path it has taken.  Look under the nose at the floor of the building, and you will see the track that the magnetic tug uses to move the airframes down the production line.  Almost all of the scaffoldings have been removed, offering a good view of our new airplane.  At the very back of the building, three new fuselages just arrived from Wichita await their trip through the factory.  This constant stream of new aircraft is visual proof of the 737’s success. 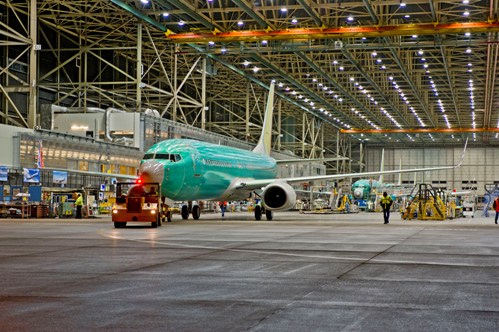 “Renton, we have roll-out.”  N8301J makes its initial journey as a tug pulls the completed aircraft out of the hangar.  Think back to those first photos from Wichita as this fuselage was being constructed, and compare them with this photo.  Only a little more than 100 years ago, the Wrights took to the sky in a flimsy wood and cloth airplane.  Today, we build a magnificent airplane like this in little more than a month.  Wow! 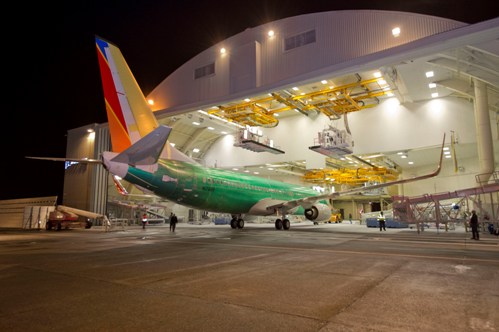 Upon leaving the assembly hall, the destination is the paint shop.  N8301J wears it’s temporary Boeing registration.  The computerized spraying units can be seen hanging from the roof of the hangar.  Stay tuned for videos and more photos of our aircraft wearing its Canyon Blue livery.

Xavier_Ware
Not applicable
I saw this beauty @ Renton yesterday...all painted up! It looks GREAT!!! I had hoped to see a test flight...unfortunately it just sat on the tarmac. I will try again tomorrow.
300 Loves

David_Grim
Not applicable
Just A FYI Me and my team that painted this beautiful southwest -800 are kind of insulted by the statemant about "computerized spraying units hanging from the ceiling".We are actually real live human beings that do the painting.we are also very proud and love southwest airlines paint livery.We always try and take a little extra time and attn. to detail with SW airlines.They are a loyal boeing customer and have been great to work with through out the years.... Thank you SW
298 Loves

blusk
Not applicable
David, A huge thank you to you and your team for a fantastic job. I didn't mean to disparage the work you all do, and I am sorry you took offense to my comment. I was just describing the items visible in the photograph. I know there is a huge amount of physical labor and talent that goes into every paint job. The same as is involved in the entire production process. Computers are just tools. You and your coworkers are the heart that goes into every Boeing airplane, and I have mentioned that in many of these posts. Brian
300 Loves

Steve_C___
Not applicable
I found some pictures after it was painted http://www.airliners.net/aviation-forums/general_aviation/read.main/5391151/
300 Loves

Can is check a packed cardboard box as one of my pieces of luggage?

Airports Southwest Needs to Fly to

Early Bird at Check In kioask or Counter?