Ten years ago this month, Southwest Airlines teamed up with Texas grocer H-E-B to help feed those in need with a program titled “Flight to Fight Hunger.” Landing in six Southwest Cities, a new 737-700 carried more than 1.2 million pounds of food to 18 food banks supplying more than 350 charities throughout the state thanks to the efforts of the two Texas legends. 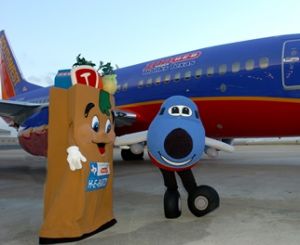 In celebration of H-E-B’s 100th anniversary, a special logo was affixed to both aircraft N490 and an H-E-B delivery truck.  At a ceremony in Houston, Colleen joined H-E-B Chairman and CEO Charles Butt to christen both vehicles, parked nose to nose, both filled with food. 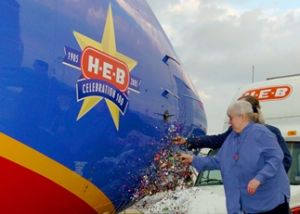 "The Employees of Southwest Airlines are delighted to help H-E-B celebrate such a landmark occasion,” said Colleen.  "H-E-B's people, its leaders, and the values it brings to a community have become legendary in our great state, and it is definitely a role model." 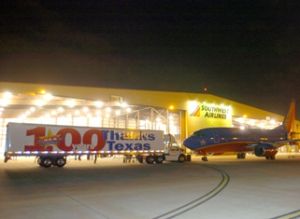 After being loaded in Houston, our special plane departed for Dallas, and then on to Austin, where a marching band from Del Valle High School joined a large group of volunteers to unload the deliveries that filled nearly 2,400 grocery carts. 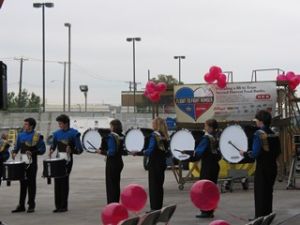 Later in the day, the same aircraft made additional stops in Corpus Christi, Harlingen, and San Antonio.  With the assistance on the ground from an additional 28 H-E-B trucks, the donations were able to go even further to additional cities such as Abilene, Lubbock, and beyond. 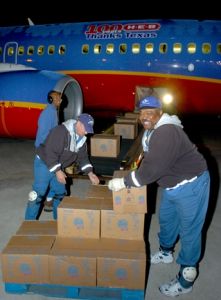