Similar to the way AirTran Airways helped introduce Southwest to Atlanta in 2012, Morris Air paved the airway to the Pacific Northwest during the year following their becoming part of our family in late 1993. And, as part of that expansion, Seattle—the birthplace of our Boeings—became our 39th station when it landed on our route map in the summer of 1994.

In addition to being home to some great coffee and music genres that put Seattle on the recording artist radar in the early ‘90s, it also has a rich heritage in both the nautical and aeronautical worlds.  To help celebrate this legacy, the annual Seafair takes place each summer featuring the best from both the sea and air. 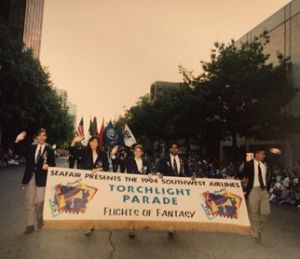 During the nearly month-long festival shortly after our first flights, Employees marched in a downtown Seattle parade to help introduce Southwest to the Emerald City. 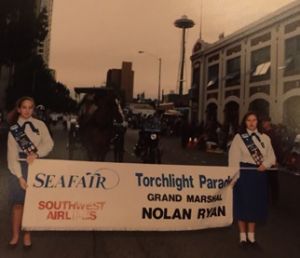 The Grand Marshal for the parade was a familiar face from Texas, baseball legend Nolan Ryan, who happened to also be our unofficial “pitchman” for Cargo.  Following Nolan’s carriage was a classic trolley filled with new Station Employees.  Also accompanying the procession was the Light Brigade—Employees from Headquarters marching with their illuminated marshaling wands. 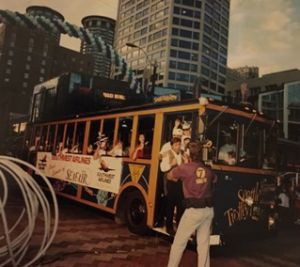 A separate float provided a new look to our classic 737s, with a desert gold aircraft featuring a nose similar to many legendary seaplanes of years past, helping to support the “Flights of Fantasy” theme. 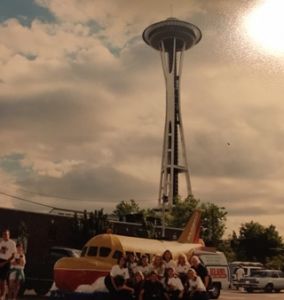 Even TJ LUV made the trip to Seattle to march in the parade and greet the crowd. 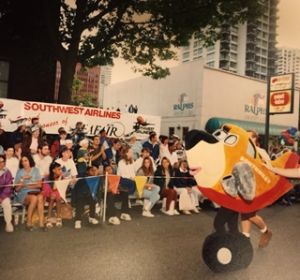 Later during that year’s Seafair celebration, our Marketing department also hosted guests at the hydroplane race on Lake Washington to help introduce our new service of eight daily flights into SeaTac, which has now grown to over 40.  Twenty years later, Seattle remains a summer travel favorite to Employees and Customers alike.
2 Loves