Flashback Fridays: A 500 with Scimitars? 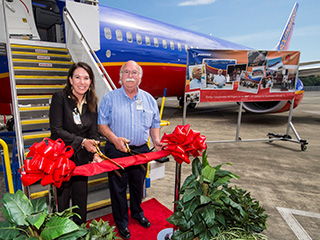 A few months ago our Name That Plane Flashback covered a few aircraft in our fleet with special registrations.  For many years, most of our -300 series aircraft registrations started with a 3, the -500s started with a 5, the -700s started with a 7, and usually ended with a SW or WN. The majority of our specialty registrations (outside of the traditional SWs and WNs) honor folks such as Herb (N711HK) or Charles Taylor (N289CT), the “Father of Aircraft Maintenance,” and, of course, Colleen’s N714CB.  It’s not too often that we introduce any new registrations outside of the new four-figure “ship number” nomenclature recently adopted.  But earlier this summer, our newest specialty registration joined the fleet, with both the numbers and letters bearing significance. As mentioned in the earlier post, the 737-800s we started taking delivery of in early 2012 traditionally start with 83 or 86 (the 83s are ETOPS capable, and the 86s are standard -800s) and the next two numbers in the registration usually follow the order in which they were received from Boeing.  For example, our very first 737-800, Warrior One, is registered as N8301J. 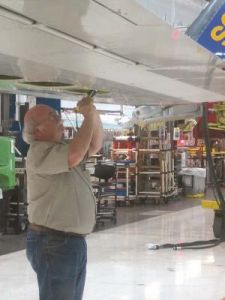 Up in Seattle at Boeing Field, we have two Tech Ops Employees who work directly with Boeing as Customer Representatives for new aircraft orders.  These on-site Employees work with the manufacturer as aircraft enter the final assembly process down in Renton and then ensure that the finished product meets our requirements and standards prior to the new plane being officially delivered.  One of these Employees is William “Bill” Rogers (photo at right).  Since moving into this role in August of 1991, Bill has overseen the delivery process of over 500 Southwest aircraft. A few months ago, Bill had already begun to work with Boeing on our next aircraft within production scheduled to be ship number 8636.  After it was painted in Canyon Blue colors Bill went into the hangar to inspect it, which is a standard part of the process that usually takes place in an otherwise empty hangar.  But when he walked in this time, there were about 30 people standing around the aircraft.  His first thought was there must be an issue somewhere.  What they were actually there for was for the debut of a new registration in recognition of his 500th new aircraft delivery, N500WR (photo at top). So, no, we do not have any plans to add either Split Scimitar or standard blended winglets to any of our -500 series aircraft.  But be on the lookout for this very special registration the next time you see one of our new -800s at your station.
3 Loves