Maybe you’ve worked or flown on 737-700, N418WN, and you saw the words The Winning Spirit proudly displayed on the aircraft’s nose.  The reasons behind the names some of our aircraft carry are self-evident, but what about N418WN?  It is actually the latest of several aircraft to wear this title, and it and its predecessors are dedicated to our Original Employees.  This week, we have some photos from the dedication of the original The Winning Spirit, N68SW, on our tenth birthday, June 18, 1981.  I looked at this event briefly in an earlier post this year, but I think it deserves a second, more in depth look. 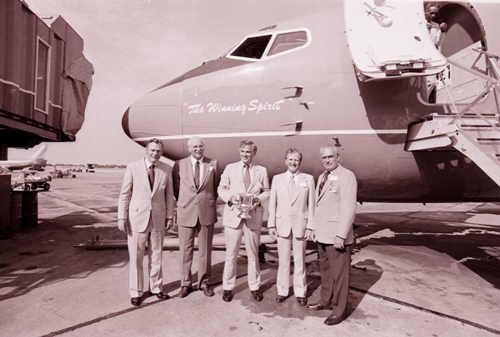 One of the things that make this event significant is that this was the last public event where our Original Employees were represented in such large numbers.  With the exception of our first President, Lamar Muse, the photo above shows the original Southwest Leadership Team.  Out of all the photos from the event, this is my favorite.  It shows Co-Founders, Herb Kelleher (left) and Rollin King (center).  And, we have the three members of the “Over the Hill Gang,” a group of senior former airline executives who were hired to provide the brand new Southwest with operating experience.  Bill Franklin is between Herb and Rollin, and Don Ogden is to the right of Rollin, followed by Jack Vidal.  As I wrote in May’s blog post:  “Don Ogden had already retired as Vice President Flight Operations earlier in 1981, and while he remained on the Board until 2006, Rollin would step back from his day to day role with the Company.  In 1985, Bill Franklin would head Southwest’s subsidiary TranStar as President.  Jack Vidal, who received Employee #4 under our current system, retired in 1995.  Herb, of course, would remain Chairman, CEO, and President until 2001 and as Chairman until 2008." 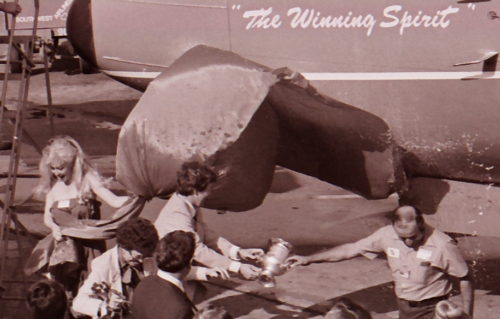 For the christening of the aircraft, there was a drawing to see which two Employees would have the honor.  Scott Johnson (left), then Director of Flight Control, and Bill Abraham, Maintenance Line Forman won.  The urn appears to have contained confetti instead of champagne, and as they were emptying the urn, the aircraft’s name was unveiled. 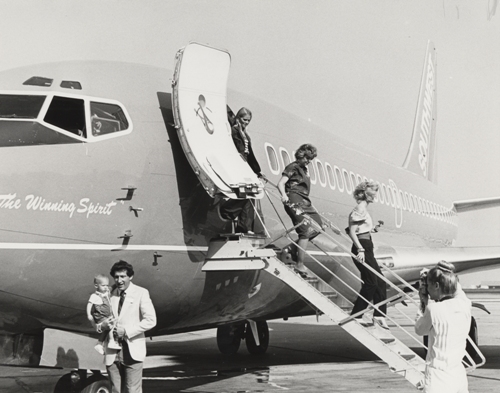 Writing on the back of the above photograph identifies the women on the stairs as Joy Bardo, Patty Alston, and Cathy Parson.  The late Sam Cohn stands next to the aircraft. 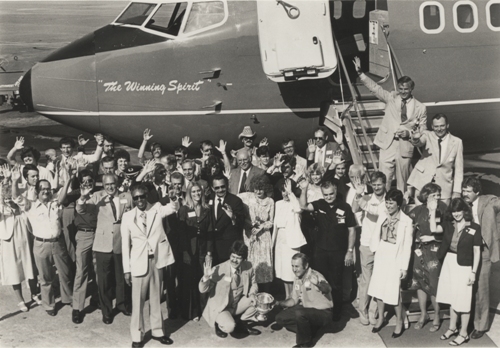 The final photo is the one I really wanted to talk about.  According to LUVLines (our Employee magazine), we had 66 Original Employees still on the payroll on the occasion of our tenth anniversary.  Considering that our number of Employees for the first two years averaged around 190, 35 percent of the Employees who began Southwest were still working a decade later.  The Employees in the photo created the foundation for what Southwest is today.  Somewhat surprisingly, 41 years later, we still have about five percent of our Originals working with us.  But let’s go beyond the numbers.  From our vantage point 41 years after Southwest began service in 1971, I think a lot of current Employees tend to think of the Originals as some form of super human.  Yes, they did amazing things that we will never have to do, but I think that making the Originals bigger than life is the wrong way to look at this group of Employees.  Even though they created a special airline and a rewarding work place, it lessens our own efforts and relieves of us of our own responsibility to excel if we deify them.  It’s like saying, “I could never do what they did,” and that simply isn’t true.  Don’t you think that there were days that the Originals would rather have been someplace else than work; that there were days filled with upset Customers and irregular operations (it rained and snowed back then) that ruined their personal plans; and that they probably didn’t like the constant change and the never finished nature of an airline career?  One of the Originals’ greatest accomplishments was the ten-minute turn, but some of them have confessed to me that they weren’t happy having to change.  No one likes extra work, but they didn’t have the option of the ten-minute turn or keeping “business as usual.”  And, you know what?  Some of them didn’t always like their immediate boss, either.  Does that detract from their accomplishments?  Absolutely not.  What makes their actions special is that they were ordinary people with an extraordinary Spirit.  They came to work, they smiled, and they made Customers feel welcome with genuine gratitude and empathy, even if they wanted to be elsewhere.  When irregular operations messed up their days, they made the best of the situation.  When economic, competitive, or legal pressures required change, sometimes overnight, they met the challenge because they didn’t want to fail.  They knew their survival depended upon each other.  This is the Winning Spirit of real people that we celebrate and dedicate with this aircraft.