Along with our 40th anniversary this year, we should be celebrating another almost forgotten 75th anniversary.  On January 27, 1936, Frank Whittle and three other English investors formed Power Jets, Ltd. to make and market jet aircraft engines.  Whittle was a career Royal Air Force officer who had a unique eye on the future.  He patented his design for the jet engine in 1930, and he began experimenting with what would become the components of jet engines, including compressors and turbines during the 1930s.  In World War II, Britain and Germany both introduced operational jet aircraft, and the US began making license-built versions of British jet engines.

The Gloster Meteor was an early British jet aircraft.  Some versions were operational at the end of World War II.

At this point you are probably scratching your head and wondering what this has to do with Southwest.  Well it has everything to do with it, because as far as I can tell, Southwest was the first airline in North America to have always operated nothing but jet aircraft.  In fact, we have never operated an airplane with a propeller—although that wasn’t our original plan. 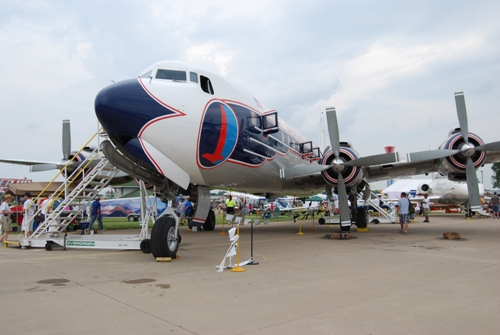 Many aviation geeks look upon the 1950s as the golden age for commercial aviation.  In the United States, the big radial piston engines powered the most modern airliners like the Douglas DC-6 and DC-7, and the Lockheed Constellation.  Above is a restored Eastern DC-7B--note the pans under each engine to catch dripping oil. 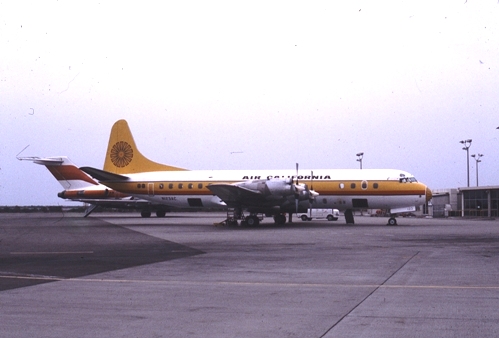 Capitol Airlines, based in the Midwest and Northeast tried a different approach by buying the turboprop Vickers Viscount from England (as did the predecessor of Air Canada, Trans Canada).  The turboprop used a jet engine to power a propeller, and later Lockheed would build their version of a turboprop airliner, the Electra.  (Above is an Air California Electra). 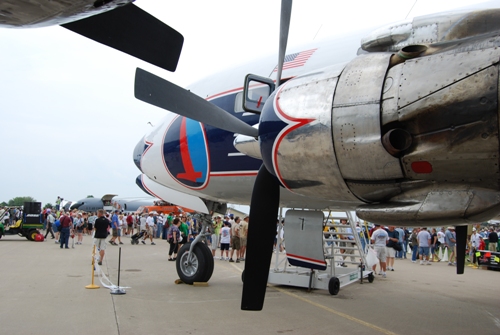 On the other hand, the zenith of the big piston engine was represented by the Wright Turbo Compound as seen on the restored Eastern DC-7B.   In an attempt to squeeze every ounce of performance out of a piston engine, the turbo compound captured the engine exhaust to drive three power recovery turbines that connected to the engine shaft.  At night, passengers could see exhaust flames coming out of the exhaust ports, which are the two stained metal pipes at the rear of the engine. 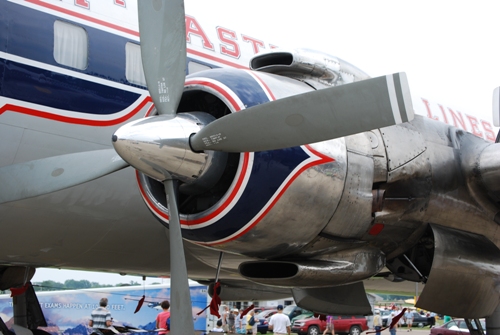 Compared to jet engines, these piston-powered beasts were complicated, temperamental, dirty, and subject to breakdown.  In addition, they burned up to two gallons of oil an hour.  Before departure, oil trucks had to pump up to a hundred gallons of oil into tanks in the wings.  By contrast, some cars may contain more oil than modern jet engines.  On top of that, the Turbo Compound ran best on 130 octane gasoline, which required lead in the expensive (even back then) refining process.  Inside this tight cowling are 18 cylinders, surrounded by all sorts of shafts, gears, and turbines.  Two of the primary inflight duties of the Flight Engineer were monitoring the functioning of the 72 spark plugs on the aircraft and ensuring that the cylinder heads didn’t overheat. 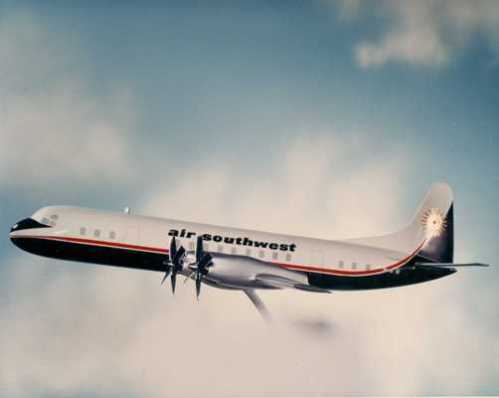 Had the other airlines decided not to fight Southwest’s creation, in 1967, we would have taken to the sky as Air Southwest and operated former American Electras.  (See the artist’s impression above.)  Even at that early date, shorthaul flights were being taken over by jets in the form of the BAC-111, DC-9, and 737.  We would have started service with an aircraft that was already nearing commercial obsolescence since it would have had to compete with the existing airlines' jets.  So maybe, those airlines who fought our creation for four years did us a favor because that delay brought us to a point where Boeing had three, fresh-from-the-factory 737s representing state of the art technology that needed a home.  Up to this point, it was unheard of for a new airline to begin service with brand new equipment.  Intrastate carrier PSA had begun with surplus DC-3s and DC-4s after the war, and almost all of the local airlines like Trans Texas, Allegheny, or the original Frontier began with either war surplus or other airline castoff DC-3s.  Even later intrastate carriers like Air California and Air Florida used hand-me-down Electras. 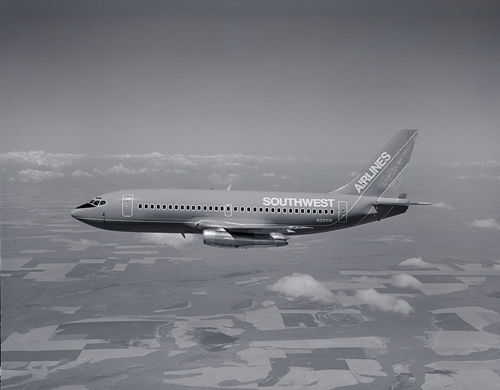 N20SW, one of our three original aircraft

That’s just the serendipitous nature of airline history.  A change in plans for one airline can and did change the entire industry.  I often like to think what would have happened if Air Southwest had taken off in 1967?  Without the other airlines fighting us every inch of the way, would we have developed our Warrior Spirit that has seen us through such difficult times?  Would we have signed the agreement to move to DFW when the other existing airlines did?  We will never know for sure.  The only thing of which we can be sure is that Sir Frank Whittle’s invention changed aviation forever.

Erik1
Not applicable
That can't be an accurate restoration of an Eastern DC-7; both sides of the airplane are freshly painted and clean! (Rickenbacker was alleged to only keep the boarding door side of their aircraft this being in the days prior to jetways where airplanes parked "abeam" of the terminal.)
21 Loves