Another college football season starts this weekend in earnest, and in my browsing through still more black and white negatives, I found some photos that involve my favorite school getting together with my favorite airline.  I should note that Southwest recently became the Official Airline of the Athletic Department of the University of Texas, but before we begin, I must make full disclosure that I am biased because I am a Mustang of Southern Methodist University (SMU), here in Dallas.  So I hope you Longhorns (including Gary Kelly, our top guy), Sooners, Tigers, Trojans, Buckeyes, Ducks, Gators, Frogs with horns, Crimson Tide elephants, and other assorted collegiate flora and fauna won’t hold that against me and that you will keep reading to look at some interesting early Southwest photos. 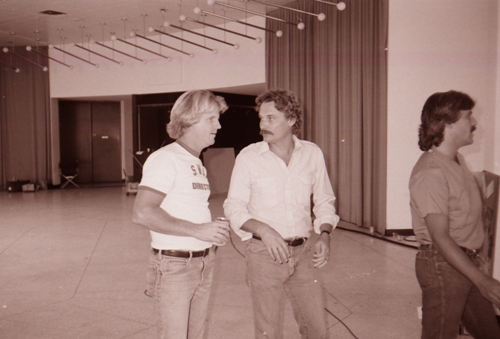 Regular readers will know that a couple of weeks ago, I shared photos of our Headquarters offices that were housed in the now demolished, former Braniff concourse at Dallas Love Field.  The end of the concourse was capped with a rotunda, whose interior featured appointments from the noted artist, Alexander Calder.  During Southwest's occupancy, the rotunda was used for Company events, and as these photos will show, at least one commercial (or a promotional video) was filmed there.  The man wearing the T-shirt (above) is Roy Spence, the “S” of the advertising agency GSD&M.  Behind Roy and the man with a mustache, we see the opening to the hallway leading to the rest of the old concourse. 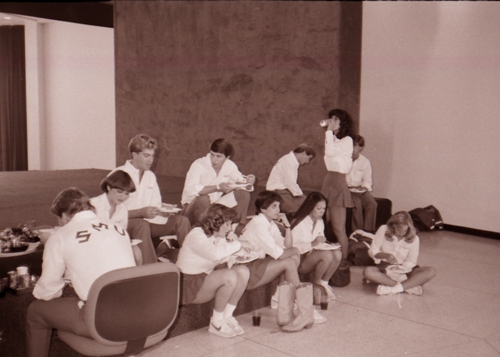 The shoot featured the cheerleaders from SMU.  Judging by the dates of other photos in this binder of negatives, I am guessing these images were taken around 1982 or 1983.  If so, that places them right in the middle of SMU’s Pony Express years with Eric Dickerson and Craig James.  (We won’t talk about SMU’s fortunes a few years after these photos.)  At some point in the day, the SMU Cheerleaders take a lunch break (above). 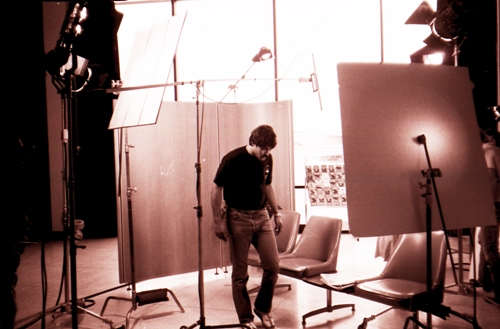 Next, we see a technician preparing the central area in the concourse rotunda for the taping.  It looks like this part of the shoot involves a set of gate chairs, and a rack full of Southwest materials has been placed in the background.  Here’s where things get interesting because obviously, this area would be too small for all of the cheerleaders.
So what’s the story? 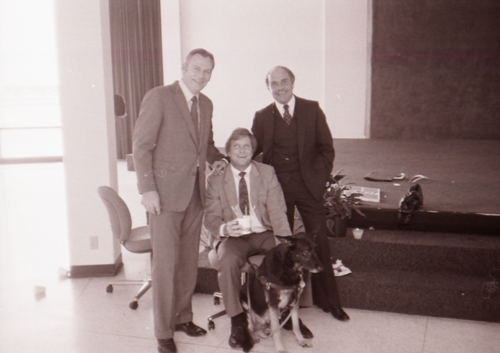 The answer may lie with the man and the guide dog next to Herb.  It’s a good guess that the chairs in the previous photo were meant for him.  I have looked through the back issues of our Employee magazine, LUVLines, hoping to find the story behind these photos, but I came up empty.  What we do know is that all of the photos were on the same roll, and the shots of the man and dog are interspersed with the photos of the SMU students.  What his relationship to Southwest and to SMU remains unknown. 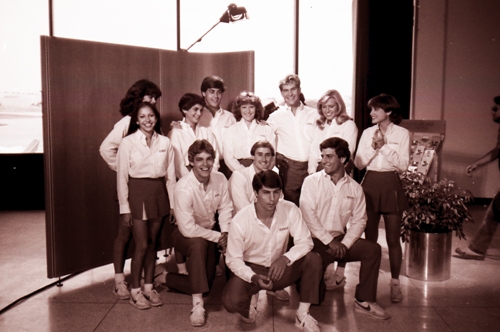 My first exposure to the SMU Cheerleaders came during my freshman year and the 1970 football season.  The head cheerleader (I can’t remember his name) was more standup comedian than cheerleader.  Each game was like a comedy club.  (We went five and six that season, but we won all five home games.)  Here’s a more formal shot of this version of the cheerleaders.  The chairs in the earlier photo have been removed, and the area opened up.  The “swoosh” on their shoes reveals that, even 30 years ago, Nike was the shoe of choice. Outside the window to the left, the former Braniff hangar at Love Field is faintly visible. 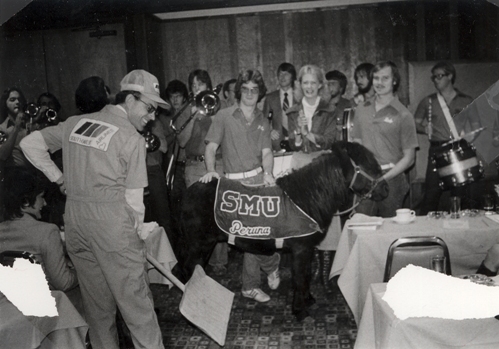 It’s probably a good thing that the cheerleaders didn’t bring along the school’s mascot, Peruna.  The feisty pony is known for less than stellar manners, and he also would have complicated the cleanup process, as he did here during an earlier visit to the Southwest Headquarters.  That’s former CEO and President Howard Putnam with the shovel duty.  (This is Peruna VI, the longest serving Peruna and the one from my own SMU time.)

These photos present one of those frustrating but interesting mysteries that archives sometimes offer.  On the one hand, it is great that events like this have been preserved for future history, but it is sad that the details seem to have been lost over the years.  Even though our Company’s history is relatively recent at 41 years, combing through its unwritten pages is a long voyage of discovery, and for some of the ports along that voyage, there aren’t any navigation charts.  If anyone remembers this particular shoot, let me know and I will share the findings.  Here’s hoping your favorite team does well this year.