Flashback Fridays: A Look At The Roots Of Our Industry

Following up to my last Flashback Friday post about the former Pan American terminal on Treasure Island, I thought we might stay in the 1930s for one more week.  It’s easy to forget the roots of commercial air travel and just how far we have come, and also there is a big lesson here about thinking outside the box and willingness to change.  My first airplane trip was in 1954 in a DC-3 on the Dallas-based Pioneer Air Lines, which merged with Continental the next year. 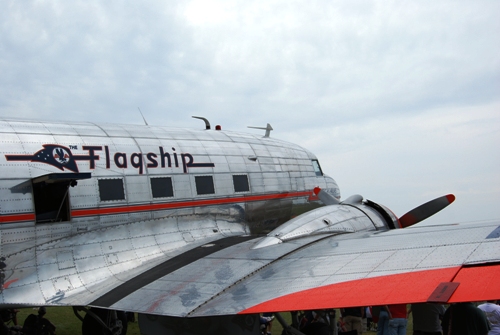 The DC-3 above is a former American example, and it was on display at this year’s Air Venture at Oshkosh.  Over 16,000 DC-3s and its various military variants like the C-47 were built, so it is still ahead of the 6,000 or so 737s constructed.  The DC-3's family tree goes back even earlier because it is a variant of an earlier aircraft, and therein is our story.

TWA, under the technical advice of Charles Lindbergh, was responsible for the launch of the Douglas Commercial Series.  Above we see one of the rare remaining examples of the DC-2 at AirVenture.  It wasn’t the first modern airliner, that honor went to Boeing and its model 247.  The 247 in comparison to the Ford Tri-Motors and the bi-planes that  airlines were using at the time was fast, comfortable, and dependable.  United was the launch customer for the 247, but United and Boeing were part of the same company.  When other airlines like TWA and American went to Boeing to buy 247s, they were told they would have to wait several years until all the United aircraft were completed.

TWA couldn't wait, so at that point, it turned to Douglas and asked them to build a larger, faster, more comfortable aircraft than the 247.  Lindbergh drew up a requirement that it had to be able to take off, climb, and reach the next destination from the airline’s highest city, Winslow, Arizona, by only using one engine.  In response, Douglas built the DC-1, a 12-seater that met and surpassed Lindbergh’s requirements.  Soon, the production version, a slightly larger 14-seat DC-2 was rolling off the Santa Monica production line, and the airlines of the world were beating a path to Douglas to order the “Two.”

The picture above shows that the DC-2’s cabin was pretty similar in concept to current aircraft, even though it was only wide enough for one-abreast seating.

One of the established DC-2 operators gave Douglas a dilemma.  American Airlines wanted a larger aircraft seating 21 passengers for daytime or 14 overnight berths.  Douglas could have turned them down and continued its profitable DC-2 production or it could take a chance on the new larger aircraft.  Here is a classic business dilemma:  Do you abandon a proven, steady seller like the DC-2 to gamble on a new product that could bring even greater sales, but with no guarantees, especially during the Depression.  Or, do you concentrate on the sure thing and avoid risk.  Boeing had chosen the latter course by refusing to modify its 247 production lines, and it would be almost 25 years before Boeing would build a successful airliner with the 707. Douglas took a gamble on change and chose to build the larger, more complex DC-3.  The DC-3 (above), with 2+1 seating is wider than the DC-2, has more powerful engines, and was more economical to operate.  Almost overnight, the DC-2 was obsolete.

The DC-3 quite simply defined air travel; in its military version, it flew with all of the US armed forces and our allies.  It was license built in Japan (and the Japanese kept manufacturing it after they attacked us at Pearl Harbor) and in the Soviet Union as the Li-2.  The DC-3 had a lengthy life with the major airlines, operating alongside the early jets of airlines like Continental and Delta.  Local airlines like the original Frontier, Trans Texas, Allegheny, North Central, and my dad's Pioneer relied upon the “Three” as their primary equipment for many years.  Douglas became the primary airframe manufacturer for the world’s airlines until the onset of the Boeing line of jetliners. Not a bad legacy for the willingness to adapt to a changing world.

Anonymous2194
Not applicable
Great aircraft Brian. I'm sure there are still 'working 3s' in some parts of the world. I put my money on the DC-3, the Boeing 737s and the Boeing B-52 bomber as the most successful aircraft ever designed. Hey, early congrats on your discussions with the unions about the 800 series. She'll be a nice addition to the fleet if you guys decide to go that way. Also kudos on the AirTran deal. Besides the obvious benefits, those 717s give you guys some market options you didn't have before.
9 Loves

Richard_Scherf
Not applicable
Add to that list of airlines Lake Central, which I flew home from college in the sixties. They were later purchased by Allegheny Airlines.
14 Loves

Brian_Estee
Not applicable
Brian - Very cool flashback. Definately a trip in the way-back machine. I'm an Internal Branding Communications Manager at Best Buy. I'd love to connect with you or someone in your world on Southwest's amazing employee brand. Can you provide some direction on who to contact about benchmarking? Shoot me a direct email if you can help. Thanks.
15 Loves

Erik1
Not applicable
It should be mentioned that that military version of the DC-3 was referred to as the C-47, with a "code name" of Dakota.
10 Loves