Flashback Fridays: A New Year and Some Significant Photos

The most exciting part about my job is opening a drawer or a file and finding gems like the ones I am sharing today.  Over the Holiday break, I found some interesting photos of our early years, and many of them go back to a time before we had even flown our first flight. 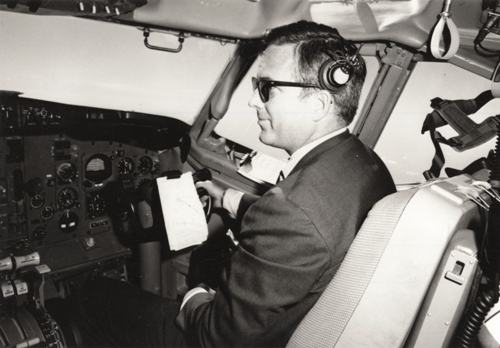 We start with what could be a potentially important historic photo.  Rollin King, who along with Herb Kelleher founded Southwest, used to fly as one of our Pilots.  I have seen this photo a few times before, and I always thought it shows Rollin in one of our cockpits—in spite of the fact he was wearing a business suit.  However, once we scanned the photo and I looked at it with a high degree of enlargement, it may, in fact, show the birth of Southwest’s relationship with Boeing. 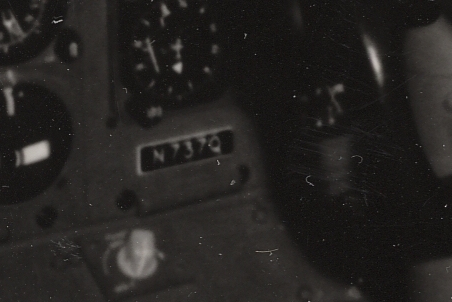 When I enlarged the photo, I discovered that this isn’t a Southwest airplane.  I could just make out the registration placard on the control panel (above), and this is N737Q, a 737-222, which means it was built to United’s standards.  (A later 737 temporarily wore the same registration in 1976.)  However, United never operated it; instead, it served as a Boeing demonstrator from 1968 to 1974.  Even narrowing down the date more, my research sources show that Boeing reregistered the aircraft from N737Q to N1359B in July 1970.  That would mean the photo was taken before July 1970.  Is this the flight (or one of a series of flights) in which Southwest decided to try and buy the 737 for its initial operations?  If it is, this is a landmark photo defining the beginning of the relationship between Southwest and Boeing. 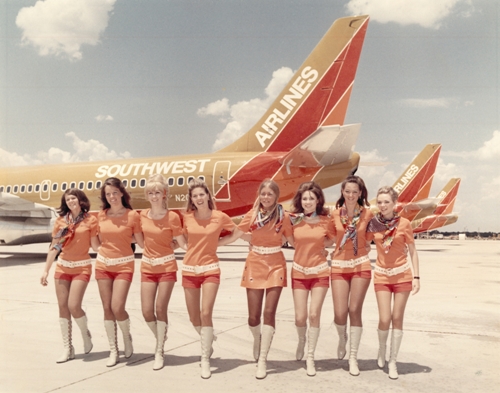 This glorious color photograph appears to have been shot in the days before June 18, 1971, because our entire fleet is at the old hangar on the north side of Love Field.  The “Hostesses” in their hot pants (and one mini skirt) are obviously the “stars” of this photo, but if you look beyond them (which might be difficult to do), there is much to see.  Look at the sky.  You can almost feel that steamy June humidity.  Here are our first three aircraft, and they carry the original livery with the word “AIRLINES” on the tail.  (For those of you keeping score, N20SW, is the closest.)  These titles began to disappear with the September 1971 delivery of our fourth aircraft, N23SW, which arrived, sans the two-word title.  Speaking of the livery, anyone who has been around a 737-200 will know that the back part of the fuselage gets soiled quickly by the thrust reversers, and this paint is pristine and not too many days removed from the paint shop. 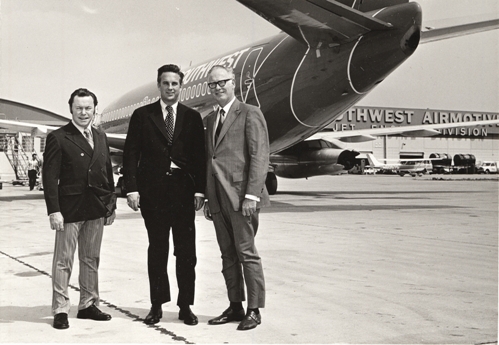 The next picture is less glamorous, but it comes from the same period and the same location—only this time, we have just one airplane at the hangar.  Rollin King (center) is standing with our first President, Lamar Muse, on the right.  I’m not sure of the identity of the man in the double-breasted sports coat.  Our files have several similar photos from this timeframe with various Employees posing with other people around our aircraft.  During the weeks before the first flight, training flights were conducted around Texas.  In fact, on June 16, 1971, one of those training flights diverted to Austin to drop Herb Kelleher off so he could appear before the Texas Supreme Court in order to fight a last-minute restraining order that Braniff and Texas International had achieved.  Herb was successful in getting the order lifted the next day, which allowed Southwest to begin service on June 18, 1971. 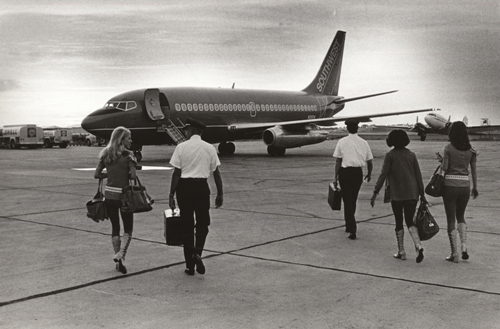 And finally, we have this evocative photo that appears to be taken just after sunrise, most likely in San Antonio.  The date is between late 1971 (because the “AIRLINES” title has been removed from N21SW) and September 24, 1974 (when the Flight Attendant uniforms changed).  The DC-3 behind the 737 is probably an ex-Texas International aircraft because it has the wheel-well doors that were added to the Texas International airplanes.  I think these “slice of life” photos from this period just might be my favorites.  The last thing on the minds of the five Crewmembers is that they are engaged in a heroic effort building an airline legend.  They are just going off to work like millions of other Americans do every day.  The First Officer (on the right) carries a cup with his morning coffee.  The Captain and the Flight Attendant on the left chat as they head out to the aircraft.  It was probably a cool morning, because one of the Flight Attendants (who I think is C.J. Bostic, who wore a similar hair style in other photos) is wearing a coat or a sweater.  To me, this photo shows us that Southwest’s survival and ultimate success weren’t secured by Employees performing epic deeds (although that did happen often); It was made possible by coming to work with a smile, a sense of humor,  and working hard on a daily basis.

Does someone eventually answer?

Mix up in charge

no birth certificate for newborn

Travel funds about to expire