John Hughes’s movie starring Steve Martin and John Candy is a favorite of airline employees because most of us have had similar situations when trying to get home for a holiday.  Because we fly standby, the possibilities for delay and creative reroutings at the holidays are magnified.  My Planes, Trains, and Automobiles Thanksgiving happened when I was an airline brat back in 1964.  I was age 12 at the time (about the age of Kevin in Home Alone), and my father was in charge of Continental’s Los Angeles Ticket Counter.  I ask your indulgence for this personal holiday story—although it does involve a lot of aviation history. 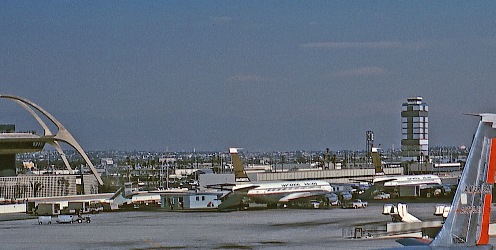 The outbound portion of the trip went smoothly because we actually flew on Thanksgiving Day.  We flew a Continental Boeing 720B from Los Angeles (the photo above is from Jon Proctor) to El Paso and connected there with a Viscount 812 to our previous home, Amarillo, via Midland-Odessa and Lubbock.  Once in Amarillo, we rented a car and drove four hours to Stamford, Texas, for Thanksgiving with my grandmother, arriving late in the day.  We could have flown Continental to Abilene, about 30 miles from Stamford, but I think Dad got a better car rate in Amarillo. And, he was looking at how to get home after the visit. 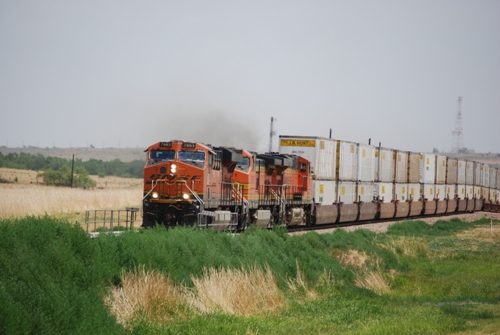 On the drive back to Amarillo late Saturday, it was a raw and brisk day.  As we climbed up the caprock near Clarendon, we passed Train #8, the Fort Worth and Denver (FW&D) Railway’s secondary train on the Amarillo to Denver run.  I thought the heavyweight diner-lounge on the rear of the train looked warm, cozy, and a lot more inviting than our rental car.  To this day, the memory of that little train is one of my best holiday transportation memories.  The old FW&D line is now part of the BN&SF and is freight only, but it is busier than ever.  The shot above is a recent photo taken close to the same spot where I saw Train #8. 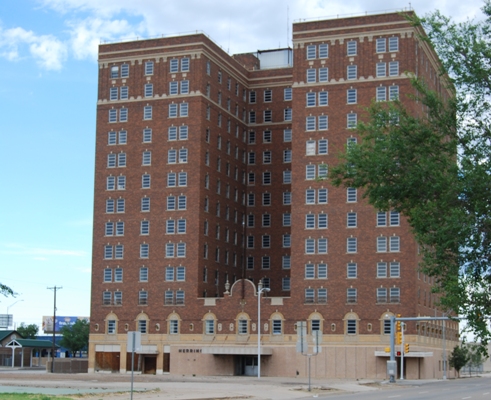 Once we got to Amarillo, we spent the night at the Herring Hotel.  As a boy growing up in Amarillo, the Herring was an off-limits island of luxury.  It was just a block or so away from the Santa Fe, FW&D, and Rock Island stations, and on the road to the airport.  Because of its location, it was a favorite of business travelers, and most airline crews overnighted there.  I had only been up to the door (but never entered) a couple of times previously, but now we were going to spend the night.  The hotel had the Old Tascosa Room nightclub with western frescoes (unfortunately, later water damage destroyed all but one fresco), but all I remember are the dark, quiet hallways and the ice water taps in the hotel room.  During the 1970s, the Herring served as an office building for the federal government, but it has been empty since.  Above is what the building looks like today, and I’ve read rumors recently that it may still be redeveloped. 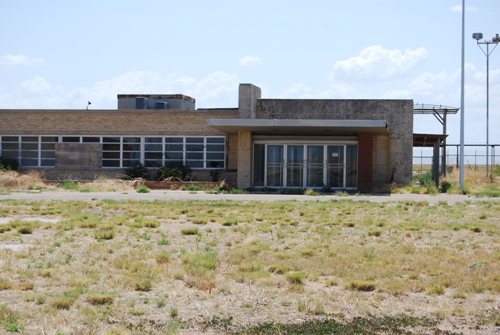 The next morning, on the busiest travel day of the year, we went to the airport for a short Viscount flight to Lubbock.  This was the last time I boarded a flight from Amarillo’s old English Field Terminal.  The building had become a good friend before we moved to California, and I had spent many an hour watching planes come and go sitting on a bag tug on the ramp side of the building while my dad was at work.  The terminal was still intact earlier this year, and when I looked inside the ticket counter wing (above), I could see that the old ticket counters with their blond color looked the same as on that day in 1964.  Through a broken window, even the smell was just as I remembered, except for the trash and weeds in the parking lot. 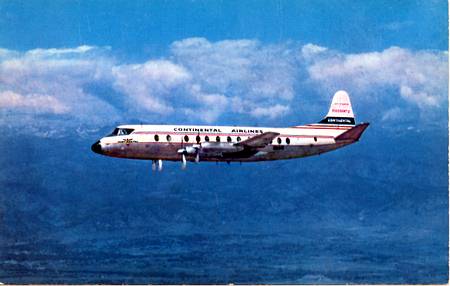 My dad was the consummate nonrevenue standby traveler.  In looking for flights with empty seats, he had figured out we could spend Sunday with family friends in Lubbock, then that evening, catch another Viscount (post card above) from there to El Paso via Midland and change to a Boeing for the trip back to Los Angeles.  At Midland, we deplaned from our original flight and boarded a Viscount headed for an overnight in Houston as “plan B” because our original flight looked like it would be full.  At the last minute, we hopped back on the original Viscount to El Paso when it didn’t fill up after all.  For awhile, it looked like our luck had changed for the good.  We got the last three seats out of El Paso on the 720B and rode through the stop in Tucson.  By the time we got to Phoenix (never thought I could work that line into a blog post), our luck ran out, and we were pulled when the flight filled up on its last leg.  We elected to stay at the airport because we still had two more chances later that night for seats to L.A.  Both flights left full, and we wound up sleeping in the old terminal in Phoenix—from where Southwest would begin service.  The next morning, everything from Phoenix to Los Angeles was showing full.  The only flight with seats to L.A. was an afternoon nonstop flight from Houston.  But, how would we backtrack to Houston?

The only way we could do that would be to take the 720B that operated a morning flight from Phoenix to Houston by way of Tucson, El Paso, and San Antonio.  In turn, that aircraft made up the nonstop flight that had seats available back to Los Angeles.  The other option was to rent a car and drive from Phoenix to Los Angeles.  I don’t think Dad was up to a long drive after sleeping in an airport all night.  So, we chose the long way home via Houston, and it was critical we be on that aircraft.  There was one problem:  A movie crew for Arizona Raiders with Audie Murphy was filling up the flight we needed from Phoenix to Tucson (they were moving from a studio outside of Phoenix to Old Tucson).  Dad managed to get us passes to Tucson on a commuter carrier, Apache Airlines, and we flew their Beech 18 from Phoenix to Tucson.  There may have been one other passenger besides the three of us.  We got to Tucson in time to see the movie crew unload, and we were on our way.  From there, it went like clockwork, except that we got put into a holding pattern for about an hour over Palm Springs due to low visibility at LAX.  After an almost 2,000 mile detour, we were finally home.  Not surprising, that was our last family nonrev trip until after we moved to Dallas in 1967.  Here's hoping your Thanksgiving travel is a lot more routine this year.

GB1
Not applicable
brian, i enjoyed reading about your trip....reminded me of the trunk routes CO used to operate.
8 Loves

Larry_Yok
Not applicable
I am amazed at your detailed memory of a trip that occurred 47 years ago. Were you taking notes?
7 Loves