Flashback Fridays: A Push and Park on Hallowed Ground 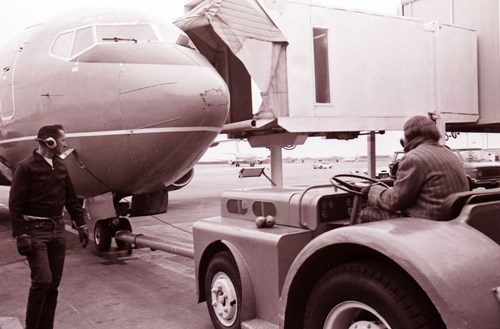 The date is probably early 1973, and it was a cold, dreary day.  N22SW is ready for pushback, while N21SW in the background holds out for the gate.  Note the lack of uniforms on the tug driver and the man with the blue jeans and denim jacket.  It’s a little hard to see, but the aircraft are now carrying their ship number on the nose landing gear door.  Also check out the peeling paint on the nose cone—hitting rain at high speed tends to peel paint.  Love Field history buffs will be interested in how the jetbridge was attached to the main building. 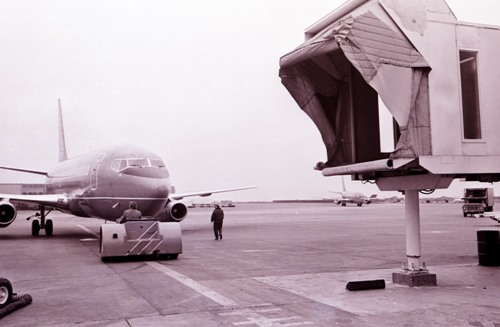 Pushback begins as N21SW patiently waits for the gate to clear.  The Provisioning truck stands by for the next flight in the left of the photo underneath the jetbridge. 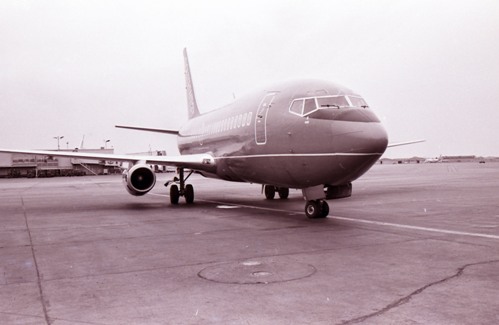 With N22SW out of sight to the left, N21SW taxies down the parking line into the gate.  An American DC-10 is just visible above the top of the West Concourse behind N21SW’s right wing. 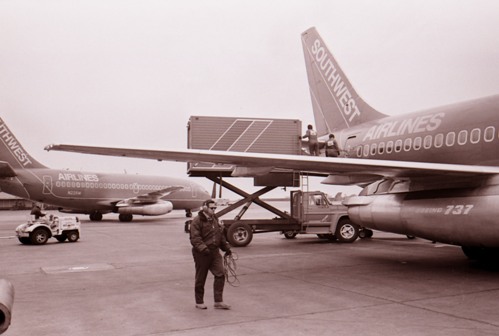 Provisioning has already raised their truck up to the aft galley service door as the pushback crew and their tug return to the gate to set up for the next departure.  A Delta bag tug drives by, and N22SW taxies out behind the newly arrived aircraft.  The grime on the aft fuselage from the thrust reversers is a trademark of the 737-200.  Both aircraft wear our original titles with the word “AIRLINES” on the aft fuselage. 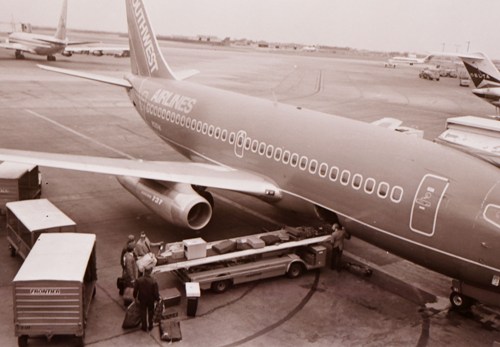 The last cart of bags is being loaded into N21SW’s cargo bins.  This photo is chock full of interesting items.  First off, the bag carts belong to the original Frontier.  Until the other airlines moved to the new DFW Airport in January 1974, our ticket counter was a small section of the Frontier counter.  That explains the bag cart.  Notice that all the Employees around the belt loader are wearing suits.  The North Concourse gates belonged to Delta, and one of their DC-9s is visible at the next gate to the right of our flight.  A Continental DC-9 taxies around the far end of the North Concourse in the upper right of the photo.  Immediately behind the tail of N21SW, an American Boeing 707 pulls into the gate. 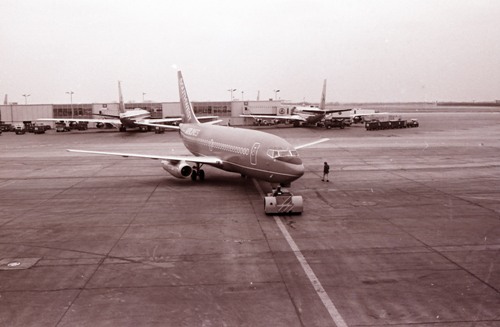 A short ten minutes later, N21SW pushes back from the gate.  Over on the American concourse, the DC-10 has been replaced by a 707, and it is joined by two more 707s immediately behind our aircraft. 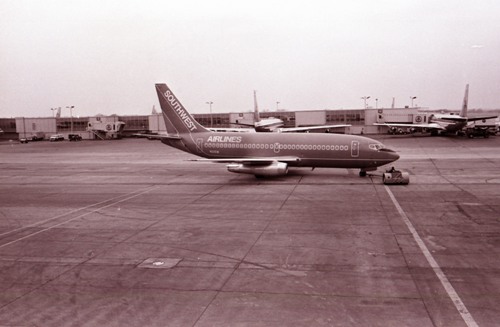 As the flight heads for the runway, we get a good view of the concourse that will be our future home at Love Field.  A victim of age and progress, the North Concourse is gone, and the new, modern new single concourse is rising in its place.  Soon, the current West Concourse will follow.  Even though their passing means a new state of the art terminal for our post-Wright Amendment Customers, it’s a shame that the spot from where Southwest’s first flight departed is gone.  Next week, we will use newly uncovered images to explore the day the other airlines moved to the DFW Airport.