Flashback Fridays: Albuquerque at Age One

I recently found a large batch of black and white negatives primarily from the year 1981.  These 30-year-old photos contain some interesting views of key Southwest events and of the day-to-day routine of three decades ago.  The next few Flashback Friday installments, including next week’s Holiday edition will come from this era. 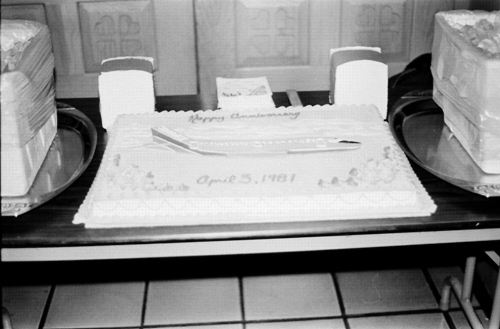 But first, we look at the Albuquerque Station’s celebration of their one-year anniversary, April 5, 1981.  An event like this almost always requires a decorated cake, and this one (above) features a representation of a Southwest 737-200.  Since the cake is flanked by two ice chests, I think we can conclude that soft drinks were probably provided, plus lots of hot coffee, as we will see later. 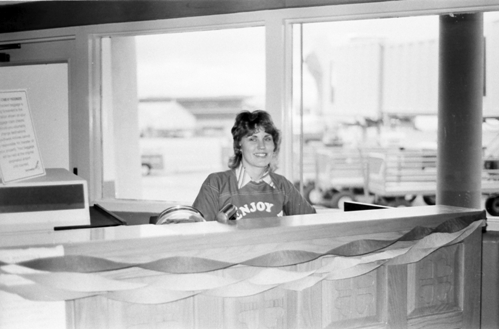 Although there is a jetbridge outside the gate window above, Passengers boarded and deplaned at ground level via stairs at our gate.  The Gate Agent is wearing a special Anniversary T-shirt over her uniform blouse.  (It says, “Enjoy A Love A Fare.”)  Paper streamers run the length of the podium. 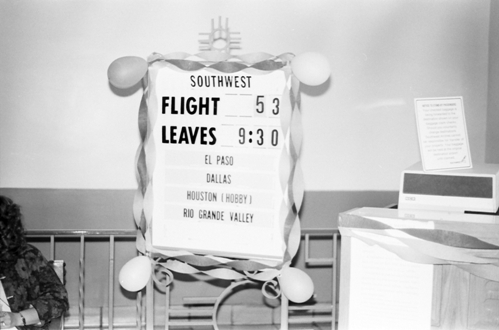 The photo above was taken in the morning according to this departure sign in the gate area.  Look at the iron railing behind the sign and at the wall-hanging above the sign, and you will see the Zia symbol, which is featured on the New Mexico state flag.  The big white box on top of the counter to the right of the sign is the final version of NCR’s “Love Machines” that dispensed cash register receipt tickets.  One of these machines is on display in the Southwest exhibit at the Frontiers of Flight Museum, here in Dallas.  As to Flight #53, it offered a somewhat roundabout routing to Harlingen (Rio Grande Valley), via El Paso, Dallas, and Houston Hobby.  Given the flight's final destination, it's somewhat ironic that the Rio Grande river runs a mile or so from the Albuquerque Airport, and the flight will follow the river to El Paso. Today, Albuquerque still has a direct flight (#218) to Harlingen, but it makes only one stop at Hobby. 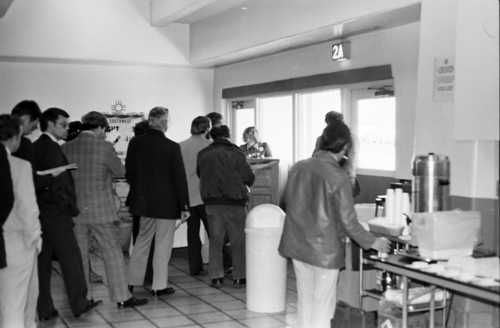 Finally, we close with one of those “slice of life” photos that I really enjoy from our archives.  Here we see Passengers lined up to board a different flight at the old Gate 2A.  This photo was made in the afternoon—I can just make out a “4” in the departure time on the flight board in the background, and I see a “9” in the flight number.  This might have been Flight #9 (or possibly Flight #“90-something”), and it is going nonstop to Dallas—I can’t make out the second stop.  The second man in from the left is reading his newspaper.  My dad had a plaid suit similar to the one the man four people in from the left is wearing.  Thankfully, that pattern and double-knits failed to survive the decade.  Only two of the people in the line (who are all males) fail to have either a suit or sports coat.  One of them is the man in front of the podium who is wearing a jacket, and the other is the man at the coffee urn who appears to have a leather (or leather-like) coat.  He will have to put out his smoke before going outside.  Since April 5 in 1981 was a Sunday, I think the anniversary was celebrated and these photos were taken the next day based on the business attire and the lack of women and families.