Flashback Fridays: An Airline Future That Never Was, Part Two

Back before the holidays, I shared some photos in a book my best friend from childhood had sent me.  The book, Transport Aircraft of the World by Lester Ott, was published in 1944, a climactic year during World War II.  In the first installment, I shared some American-built/designed aircraft that were unusual and that wound up either never being built or relegated to the scrap heap after just a few examples were completed.  At the time, I asked if you all wanted to see some of the European designs in the book, and the answer was affirmative, including a request from Southwest Airlines’ Chairman Emeritus, Herb Kelleher, so here we go.

We begin in England, where the war had all but eliminated any commercial airline service, (as was the case in the rest of Europe).  In spite of German air attacks, the U.K. had an important aircraft industry, but it was decided by the Allies, that England would devote all its manufacturing capacity toward bombers and fighters, and that the U.S. would develop and produce all transport aircraft during the war.  This must have been particularly galling to the British because they had developed some amazing airliners before the war, and the state airline, Imperial Airways—forerunner of BOAC and British Airways—had developed long haul routes to South Africa, Australia, and Hong Kong at service and comfort levels far exceeding carriers on this side of the Atlantic.  One of the most beautiful airplanes ever built was Imperial Airways’ de Havilland Albatross, shown above at London’s original airport, Croydon.  Because Croydon had short runways and was located in a built up area, Heathrow replaced it as London’s primary airport after the war.  However, Croydon’s landmark terminal still stands in the southern London suburb of the same name.

The Albatrosses’ sleek lines were especially evident during flight (above).  Interestingly, the Albatross was built of plywood, and it was fast for its day, cruising at 210 miles per hour.  During the war, de Havilland would use wood to build the famous Mosquito fighter-bomber.

As the war moved toward a positive end, the British converted some bomber types into transports.  One of the best examples of this was the Avro York, which was a transport version of the famous Lancaster bomber.  The York used the bomber’s wings, landing gear, and engines, with a new deeper fuselage.  (Some civilianized Lancaster’s were also used as airliners by Air Canada to begin transatlantic service.)  After the war, BOAC used the York on some of its longhaul flights to South Africa until more suitable airliners could be acquired and by British South American Airways Corporation (merged into BOAC in 1949) who used them for flights from the U.K. to South America. 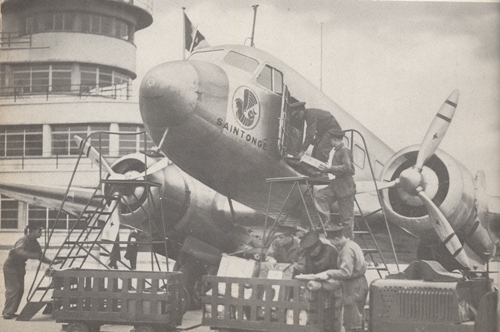 Across the English Channel, Air France had operated a unique fleet of graceful French aircraft prior to the war.  During the war, some of these aircraft were used by the occupying German forces for military transports.  In happier times (above), we see an Air France 16-passenger Bloch 220 being serviced in front of the Art Deco terminal building at Le Bourget.  Today, this building houses the impressive Musée de l’Air (Air Museum), and the building can also be seen in photos of the biannual Paris Air Show at Le Bourget.  The Bloch 220 was similar in size to the Douglas DC-2. 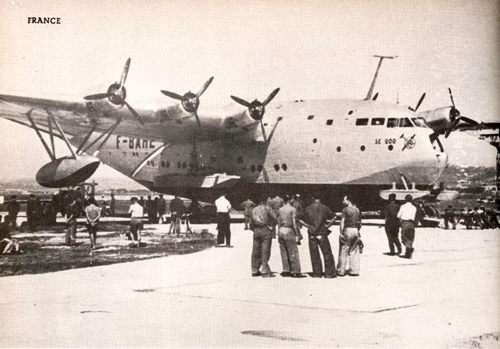 At the other end of the size spectrum was the six-engine Sud-Est S.E. 200.  While work on the aircraft had begun before 1939, construction continued during the German occupation.  This massive flying boat was another six-engine design like we saw with Boeing’s “Super Clipper” design in the first installment, and the French aircraft could carry 40 passengers and a crew of eight.  Only four aircraft were completed:  One was flown to Germany and destroyed by Allied bombing, but one of the surviving aircraft did fly after the war with the French Navy for three years before a landing accident grounded it.  As we saw with the American designs, land planes killed the flying boats because they were more flexible, cheaper to operate, and provided greater safety in operation.  Still, you have to admit that the S.E. 200 was an extremely good looking airplane.

Nazi Germany had a very aggressive prewar airliner building program, but much of this commercial aviation activity was a subterfuge.   Treaty limitations after World War I prohibited Germany from building combat aircraft, so it designed airliners that could be quickly turned into bomber designs.  These “transports” that would become bombers include the HE-111 and the Do-17.  However, one of the most impressive German airliner designs, the Focke Wulf Condor, was actually designed as an airliner for Luft Hansa (it was two words originally).  This modern four-engine airplane was the first landplane to fly nonstop from Berlin to New York prior to the start of World War II in 1939, and one example served as Hitler’s personal airplane.  In spite of their civil origins, during the war, Condors served as a long-range maritime bomber for the Luftwaffe.  Winston Churchill called the Condor “the scourge of the Atlantic,” due to the damage inflicted on British convoys.  Ironically, in the early days of the war, the British seized a Danish Airlines Condor, and it was used by BOAC for wartime service until 1941.  The other landmark German transport/airliner of this period was the tri-motor Junkers Ju-52 that served airlines all over the world, in addition to the Luftwaffe.

Meanwhile, in the Soviet Union, this prewar giant (above) was one of the largest airplanes in the world.  The L-760 required six engines and had a massive wing span of 210 feet, and it was 25 feet high.  Check out those huge wheel covers on the nonretractable main landing gear, and take note that the passenger cabin extended in front of the cockpit.  Soviet airliners of this period were oversized, lumbering, and not very advanced in design.  During the war, the Soviets began manufacturing the Li-2, which was a licensed version of the Douglas DC-3.

The other European airliner manufacturing country was Italy.  In 1933, Italy’s Secretary of State for Air in Mussolini’s Fascist government, Italo Balbo, flew 24 Savoia-Marchetti S.55 flying boats from Rome to Chicago for the 1933 World’s Fair.  The formation landed on Lake Michigan.  The SM. 83 (above) from the same manufacturer was a tri-motor ten-passenger land plane.  Aside from the Italian airline Ala Littoria, examples of the SM. 83 served with the Belgium airline Sabena from Brussels to what was then the Belgian Congo.

After World War II, commercial aviation would never seem so quaint.  Within just 14 years after the war’s end, de Havilland Comets, Boeing 707s, and Douglas DC-8s would be circling the globe many times a day.  Air travel, spurred on by pioneers like Southwest, would cease to become a luxury enjoyed by a few, and travel by air would become a necessity for the masses.