Flashback Fridays: An Airline Future That Never Was

A week or so ago, I received an amazing book from a lifelong friend from my childhood.  The book dates to 1944, and it is printed on pulp paper because higher quality “slick” paper was in short supply during World War II.  I have to admit that the content of this book, Transport Aircraft of the World by Lester Ott, simply blew me away.  I thought I had a pretty basic knowledge of most transport aircraft built here in the U.S., but this book proved me wrong, and I am excited to share some of these amazing airplanes with you. 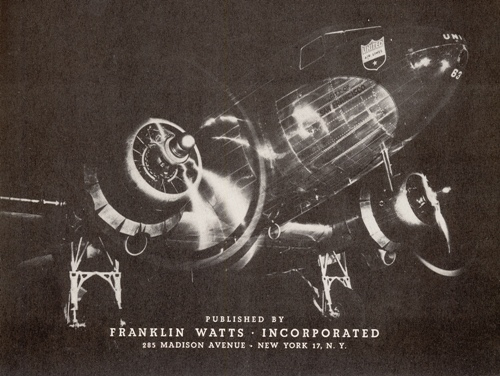 The book covers the aircraft types you would expect to find like the DC-3 (above), the DC-4 and the Constellation.  It also covers transports from the United Kingdom and, somewhat surprisingly, Nazi Germany, Italy, Occupied France, and the Soviet Union.  For this post, let’s concentrate on the depiction of some exotic American aircraft, most of which never made it into production. (If you want to see some of those equally exotic foreign designs in a future post, let me know in the comments.) 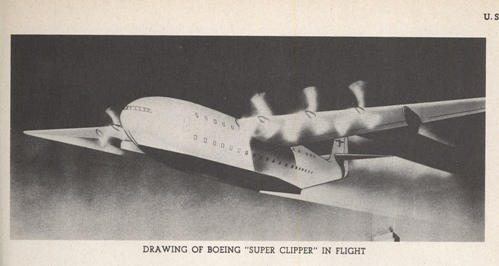 Case in point is the Boeing “Super Clipper” above.  This six-engine flying boat was designed for Pan American as a followup to the successful Boeing 314 flying boat.  The Super Clipper proposed to fly 100 passengers a distance of 5,000 miles at a speed of 300 miles per hour. 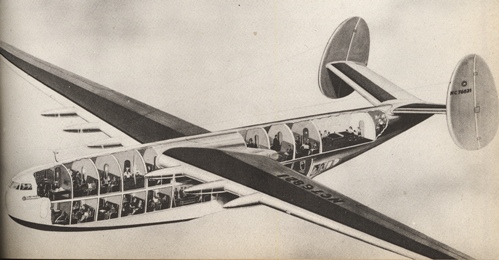 Another six-engine flying boat (see a pattern with the six engines?) design from the Martin Company was competing with the Boeing proposal.  Like the Boeing, it would have carried 100 passengers between New York and London in 12 hours.  You may not be able to see it, but the large room at the aft end of the upper deck houses a ping pong table, and the upper deck room just in front of the inboard engine has a chef in a white hat.  These giant flying boat designs simply couldn’t compete with the more versatile, simpler, and more economical land planes like the DC-4 and Constellation. 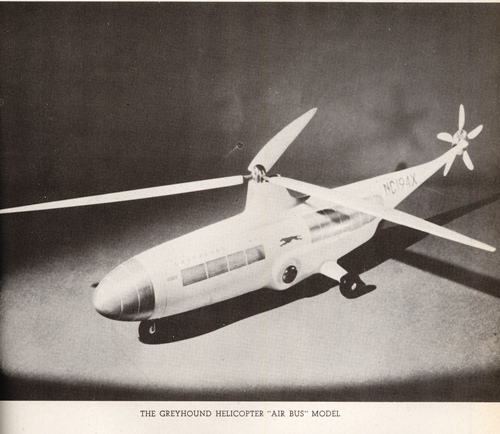 Although it is less common now, folks used to call Southwest the “Greyhound of the sky.”  Well, according to this book, Greyhound had plans to create their own air service.  The helicopter design above was a joint venture of Greyhound, Igor Sikorsky, and the noted industrial designer, Raymond Lowey.  This was to have been a 14-passenger helicopter to be used on what the book calls “local air routes.”  After the war, the Santa Fe Railway and both the Matson and Waterman steamship lines operated their own airlines until the Civil Aeronautics Board ruled that surface transportation companies couldn’t operate or own airlines.  (This is another example of the regulatory power that limited airlines like PSA and Southwest to intrastate operations.)

The aircraft above actually did fly.  It is a Burnelli UB-14, and it is a cousin of flying wing designs.  Somewhat uniquely, the fuselage and the closely mounted two engines acted as a lifting body.  The cut-away drawing illustrates the passenger cabin.  If the drawing is to be believed, there were forward looking windows under the cockpit, and those would have offered a unique view. 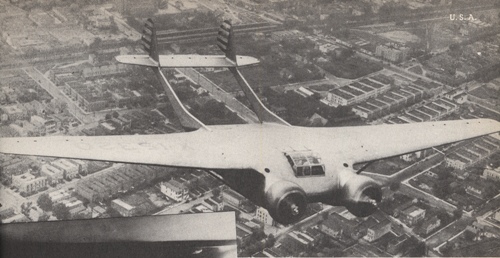 The photo above is proof the UB-14 really did fly.  In the write-up about this aircraft, the book offers a tantalizing statement.  It says:  “The UB-14 is now going through tests as a passenger and cargo transport on South American air routes.”  A look at some web sites reveals that several UB-14s were built by other companies in Canada and the United Kingdom, and that the Canadian example did airline tests in Latin America.  This is probably the aircraft to which the book is referring. 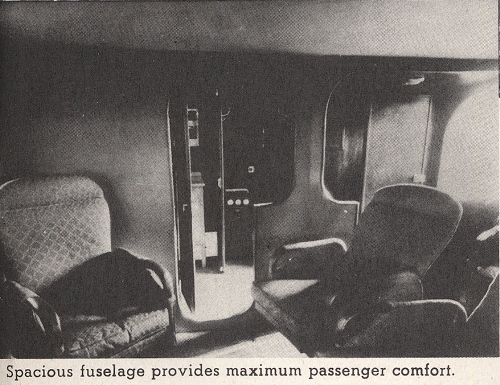 Here is a photo of the passenger cabin of the UB-14 (above).  To be honest, until I received this book, I had never heard of the UB-14 or Burnelli. 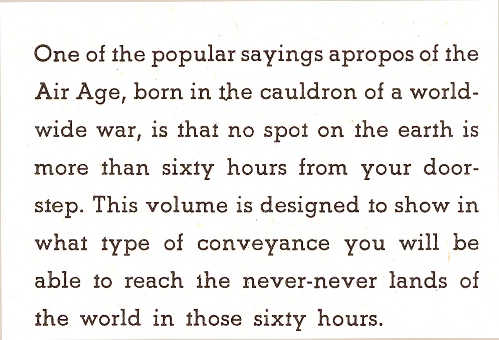 So other than the obvious avgeek interest in this subject, what do these old pictures mean to us as Southwest Employees?  Let’s look at the book from a different perspective.  It was published in 1944—that’s 41 years since the Wright Brothers first flew at Kitty Hawk, and Southwest has been in operation 41 years.  The 41 years covered by the book reveal some airline industry truths that were becoming evident, even in 1944.  One is the unpredictability of the industry:  The biggest percentage of the author’s forecasts for the future never came to be--I certainly have never heard or seen an airplane with a table tennis room.   If, 41 years ago, Herb Kelleher and Rollin King had written down their predictions for 2012, I’m guessing they probably would have been more accurate than the book, but they still would have made their share of faulty, though educated, predictions.  Another airline truth the book illustrates is dynamic change.  The Wright’s first flight was barely the length of a 747 fuselage.  Yet the book points out (above) that 41 years later after that first flight, no spot in the world was more than 60 hours away.  (Ironically, that figure hasn’t changed as much as you might expect.)  Still another truth indirectly outlined by the book is that economics and practicality trump “luxurious and exotic.”  The DC-4 and Constellation were economical and practical.  The Super Clipper wasn’t.  And the final take-away from the book is that today’s routines will become tomorrow’s history, and we are writing that future history every day.