With our 40th Anniversary less than a month away, try to transport yourself back to May 1971.  You have something rare to publicize—a new airline.  Since World War II, there have only been a handful of new scheduled carriers certified by the Civil Aeronautics Board (the CAB) to this point.

In California, three or four intrastate carriers start up and remain within the state to avoid the CAB’s jurisdiction, but only two survive by 1971.  The idea of a new airline is foreign to the traveling public.  Yet, in less than a month, the courts willing, you are going to be competing against household names almost 50 years old.  What do you do? 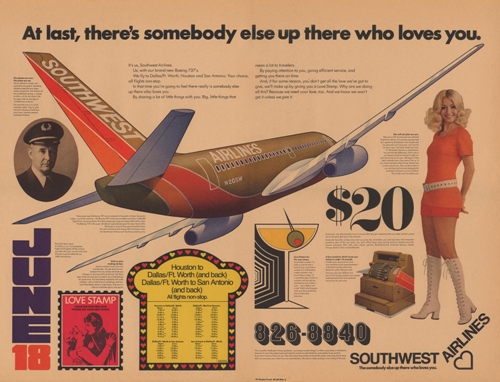 One of the things Southwest did in advance of beginning service in 1971 was to run this double page newspaper ad in the Dallas papers.  It is a public manifesto of rebellion against the way airlines have been run prior to June 18.  Like the way Jefferson used the Declaration of Independence to illustrate the colonies’ grievances against King George, this revolutionary advertisement is an indictment against the existing airlines.

The excerpt above is about the only traditional part of the ad because it deals with safety.  If offers reassurance that the operation of the aircraft won’t be wild or radical, and that it will be conducted based on experience.

In contrast to the Pilot section, everything else is different than the current carriers.  Directly across the page from the Pilot is a description of our “Hostesses,” and mixed in with the suggestive language and disparaging remarks about the other carriers is a promise that the new airline will treat Passengers like ... well, human beings.

In 1971, the Boeing 737 was a rarity in Dallas with airlines using the DC-9 or BAC-111 instead.  Southwest spent some ink on introducing the 737 to the folks of Dallas.  Incidentally, the 737 is probably the most seen airliner over the city today. 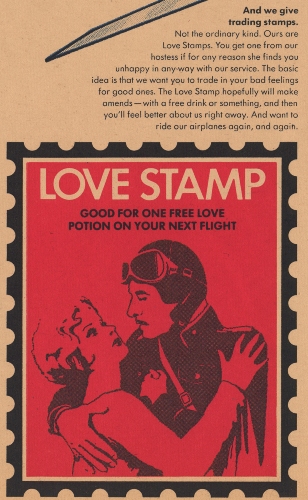 This ad contains the DNA of Southwest’s proactive Customer Service and what we call today transparency.  In our first really “big-time” ad, we admit that we won’t be perfect and will make mistakes.  If you experience a problem, the ad advises that you will receive a Love Stamp for a free drink. 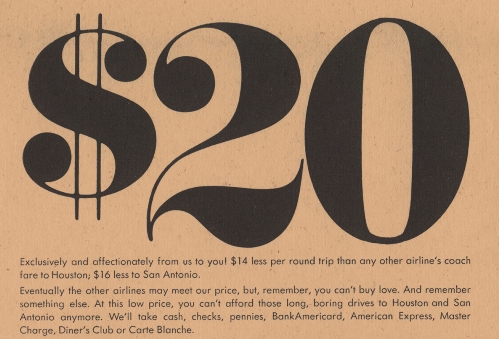 That big bold $20 probably caused a few headaches at Braniff’s Headquarters because they had taken shorthaul traffic in Dallas for granted.  But, right there in print, we laid out the major market segment we were seeking.  The ad goes on:  “At this low price, you can’t afford those long boring drives to Houston and San Antonio anymore.” 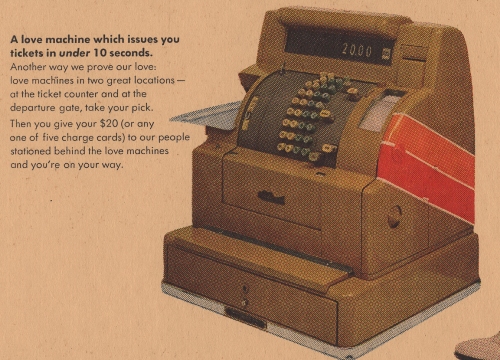 Right under that is a standard National Cash Register machine, that we called a “love machine.”  The cash register receipt served as your ticket, and it was perforated.  At the gate, the Agent would pull the ticket portion, and the other portion was the Passenger receipt.  Back in those simple airport days, you could go directly to the gate to purchase your ticket. 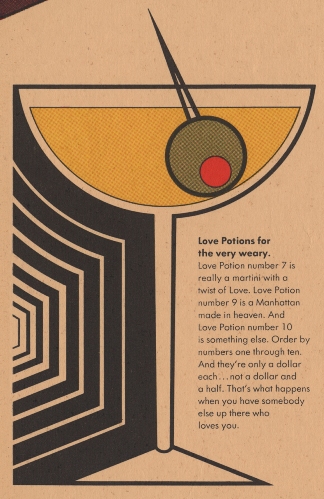 At the time, I thought our Love Potions were hokey, and I still do, but they are a part of who we are as a Company.  People still talk about them, and we have resurrected the concept for several of our 40th Anniversary events.  That illustrates why this ad is so important.  It shows that being different and change are a longterm part of the Southwest psyche.  Too often, well-meaning people think that Southwest has to start charging bag fees and other items because the other carriers do that.  They want us to abandon our individuality.  Then others think we need to be the exact same airline we were on the morning of June 18, 1971, and they don’t realize that we began changing and adapting the moment the ink was dry on this add.  We added airplanes and cities; we grew outside of Texas when deregulation came; Love Potion #7 became a martini; hot pants and boots gave way to skirts and later casual slacks and shirts; we went to standard ticketing before pioneering Ticketless Travel; and a lot more.

This ad didn’t send hordes of Texans flooding our gates demanding low fares, but they would come.  Today, ads this "wordy," would never run, but the amazing thing is we could make a 2011 version of this original ad, and although it might have different details, it would be very similar to this version.

Dick_and_Bert_D
Not applicable
Southwest Airlines has been our 'commuter' air line for all of the years we have traveled. Always cheerful, always on time, and they go wherever we want to go. Who could ask for more . . .
12 Loves

john_punzak
Not applicable
This was a great perspective on the early days! I studied Marketing for my degree at UF in '84, and one of the big case studies was on Southwest. The situation was laid out that Herb had opened for business but several years into it they were still losing money, so how to attract new customers? Of course, we students thought we knew the right way to market, so we had suggested a well thought out business plan with lots of logical features & benefits. We were blown away when the professor revealed that free drinks and hot pants was the actual answer, appealing directly to the travelling business man! A lesson not forgotten on me, 26 years into my sales career. Keep up the good work, and I promise to keep my A-List Preferred status!
8 Loves