The ten-minute turn is an indelible part of our history.  To use a sports cliché, it was an example of snatching victory from the jaws of defeat.  Given the importance of this operational procedure to our survival, and its equal importance to our public reputation of an airline marching to the beat of its own drums, I really am surprised that there isn’t a photographic layout or video showing a quick turn in action.  However, it’s possible to repurpose photo shoots for other articles to accomplish the same thing.

Dennis Lardon, a retired Original Employee, was obviously the center of attention for the photographer’s camera.  I hope he will forgive me for the photo at the top of the blog.  I don’t know at what point during the shoot it was taken, but it looks like a still photo from the great movie, Citizen Kane. 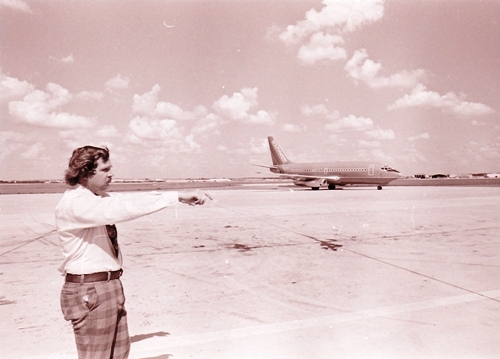 Moving to things more aeronautic; the photo above shows Dennis marshalling the aircraft to the gate.  The lack of jetways would indicate that this is San Antonio. 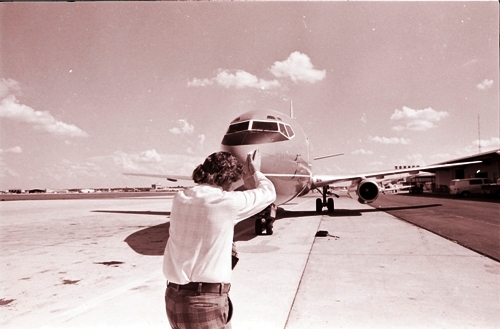 The Crew is given the stop signal, and the ten-minute turn clock is operating.  The aircraft is N22SW, which of our three original 737s, had the longest career with Southwest.  Since the world "AIRLINES" has been removed from the livery (and those double-knit plaids), we can date this to 1972 or later. 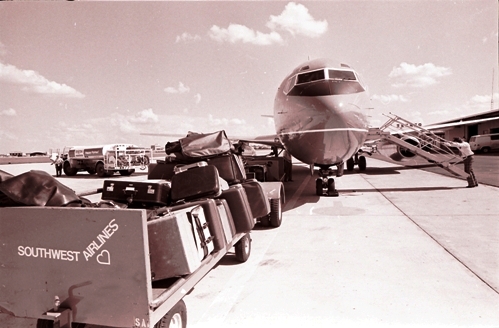 Looking above, we see the choreography involved in turning an airplane in ten minutes.  The passenger stairs aren’t even fully deployed yet, but the fuel truck has arrived and is preparing to hook up to the wing.  The ramp is already unloading inbound bags, and the outbound bags are lined up in position to board. 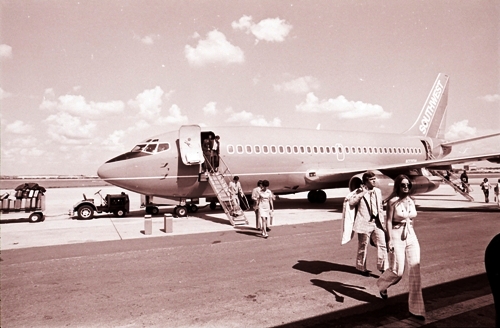 Both the front and aft stairs are fully deployed, and Customers are deplaning through both doors.  Dennis has left two clean trash cans off to the side of the stairs.  Once folks are through deplaning, he can quickly pull the dirty cans and replace them with the clean ones. 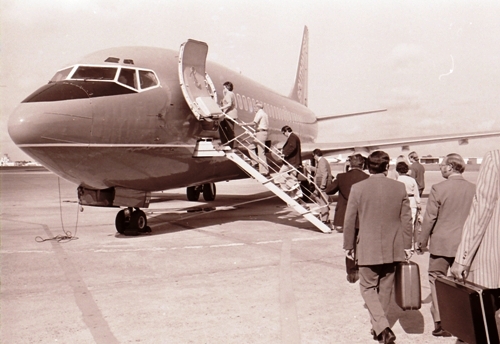 Passengers are in the boarding process, and the ramp area around the aircraft is ready to go.  All of the outbound bags have been loaded, and the cargo bin door has probably been closed.  The aft passenger door is closed and ready for departure.  As soon as the last Customer is inside the cabin, the front door will be buttoned up, the stairs retracted, and the flight will be ready for taxi.  Because the airplane parked parallel to the concourse, no tow bar or pushback tug is needed.

A lot of industry experts said we could never routinely turn an aircraft in ten minutes, but we did  It’s still just as true today as it was 40 years ago:  An airplane sitting at the gate doesn’t make any money.