It’s a tradition here at Southwest Airlines that anyone hired during our first year of operation is considered an Original Employee.  I haven’t seen a current list, but several of them are still on the job working hard.  Those Employees who were with us on “day one” will celebrate their 39th Anniversary on Friday, June 18.  Next year is the big 40th Anniversary celebration, and we always celebrate our landmark anniversaries in a big way that includes our Original Employees.

Similar to our Original Employees, I think we can set up a category of Original Passenger for anyone who flew Southwest during that first year.  Okay, I’m being selfish because I qualify, and in fact, I flew Southwest during our first month of operation.  My mother had signed up to attend a conference at the University of Houston, and my dad and I took Mom down to Houston on July 13, 1971.  Dad and I flew back to Dallas the same day. Then a few days later, he and I went down to pick up Mom, and we had a small vacation in Houston.

This is where I make a confession.  We weren't paying Passengers.  My family flew on interline nonrevenue passes, which is pretty remarkable in hindsight because Dad was the Station Manager at Love Field for Continental Airlines.  Continental, along with Braniff and Texas International, was one of the airlines suing to keep Southwest grounded.  But, this legal fight didn’t keep Southwest from offering interline passes to Continental employees though, and once onboard our first flight, I found out why.  If we were lucky, there may have been 15 other Passengers onboard the airplane.  At the awards shows, they have seat fillers who hop into seats anytime someone leaves their seats.  Airline employees and families were the airborne equivalent of the awards show seat fillers, and our presenece made the airplanes look more filled during those terribly lean days.

I noticed that the décor on the wall of the first aircraft we boarded showed scenes from California like a movie studio and the Theme Building at Los Angeles International.  Having taken my first 737 flight two years previously on PSA from San Diego to Los Angeles, I recognized the interior.  Sure enough, we were onboard N20SW, which was originally built for PSA, who never took delivery.  During that week in July, I would also fly on N21SW and N22SW, the three original aircraft.

Therein lies my second confession.  I was a huge fan of both the 737 and of PSA—well of their Flight Attendants, to be specific.  My excitement in flying Southwest was based on flying a 737 (which were relatively rare in Dallas at the time) and the opportunity to compare Southwest’s Flight Attendants (they were called Hostesses then) to those of PSA.  I ask any of our original Flight Attendants reading this to forgive my misguided physical superficiality because I was in college then.  (And I admit that hot pants and go-go boots were a major attraction of those Southwest flights.)

With the benefit of looking back on almost 40 years I can now make a more substantial, ironical observation.  Southwest’s ticket counter at Love Field was squeezed in between the counters belonging to Delta and Continental.  Here’s the irony:  There at my hometown airport, the three airlines that would have the greatest effect on my life, Continental, Delta, and Southwest, were all together.  If I had only known the significance then.

I flew Southwest as a nonrev again in October of 1971 to Houston to watch SMU play Rice.  I went to work for Delta in 1976, and by the time of my next Southwest trip in the spring of 1977, much had changed.  For this trip, I purchased my tickets, which were the receipts from a cash register.  The biggest difference was that both flights were packed with Customers.  Checking in for my return flight planted the inspiration to work for Southwest sometime in the future.  The previous evening, I had completed the most embarrassing public moment of my life by gargling the lyrics of California Girls to a mannequin in front of a large audience.  As I handed my ticket to the Gate Agent, she replied:  “Nice performance.”  I knew then that a Company that could appreciate such a unique skill as gargling  would be a FUN place to work.  And I was right.

So, during our birthday week, I’d like to offer a heartfelt thanks to our Original Employees and our other Original Passengers, too. If you flew Southwest back in those early days, we’d love to hear your stories in the comment section below. 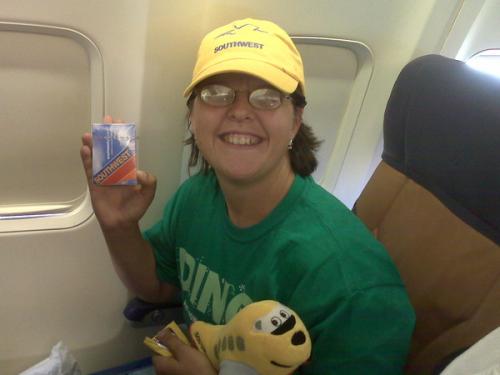 Anonymous3203
Not applicable
Great historical (hysterical) story. Only been flying for the past 28 years, Southwest is still the best. Unless forced by some ridiculous company policy to fly Continental, I always choose Southwest. I live in a little fishing community in the Rio Grande Valley of Texas, called Arroyo City, Check us out (www.ArroyoCityWaterfront.com). I can get most anywhere in the US within a few hours. A short 25 minute drive to Valley International Airport in Harlingen, gets me to Houston within the hour. However, if I'm looking to rack up some free flights for poor service or overbooking, I use Continental out of Brownsville. When I'm not flying Southwest, I'm touring the USA in a Chevrolet....or on a Harley-Davidson. Keep up the good work. You may be my next career employer!
17 Loves

Anonymous4109
Not applicable
I've been flying SWA ever since it started landing at Albany air-port. I could fly from Raleigh to Baltimore, get a massage at Destination Relaxation, and then fly up north. My parents were becoming elderly, and I wanted to be in the Albany area as often as possible to help them. The massages helped, going and coming...and I fly coast-to-coast and north and south with SWA as often as possible. I can always count on some humor, some "down to earth" atmosphere, and safety.
18 Loves