Employee
About a year ago in a Flashback Friday post, Brian mentioned an entertainment center inside Love Field that existed in the mid-1970s called LLOVE, but he was unable to find a lot of information out about it and even less in the way of pictures.

He and I had chatted about my high-school memories of LLOVE, and we were always going to jointly do a LLOVE post but never got around to it.  Chalk this one up to finishing up old business ... and to honoring a promise to an old friend.

After the other airlines left DAL for DFW, the Love Field terminal—other than the Southwest counter and gates—was empty.  Really, really empty.  After-the-neutron-bomb empty.  So the City of Dallas, needing a use for the facility, adopted the concept of putting a roller-skating/ice-skating/dancing/movie-watching/junk-food-eating entertainment center in the old terminal area.  Today this would sound totally insane, but let’s put the idea into context.  The complex opened in 1975 at the dawn of the disco craze, when everybody was on the dance floor; roller skating was suddenly cool again; women’s figure skating was becoming incredibly popular (led by rising star Dorothy Hamill), and mirror balls were everywhere—so how could this idea fail?  (Sarcasm intended)  The concept was simple: offer “young people” a place to hang out, inexpensively, and have fun.

And it was WONDERFUL.

Admittedly, my opinion is colored by the facts that I was 15 when this place opened, and I went there a lot.  In fact my high school senior all-night party was held there (shout out to the Irving High School Bicentennial Class of 1976!).   Trust me, you don’t know your classmates until you see them damaging their young bodies skating to the thumping beat of hot songs like “Boogie Fever,” “Love Rollercoaster” or “Disco Lady” under flashing lights at 4:00 a.m. The movies were second-rate, and the food was forgettable—but, for the mid-70s, the place was a BLAST for teens growing up in Dallas County. 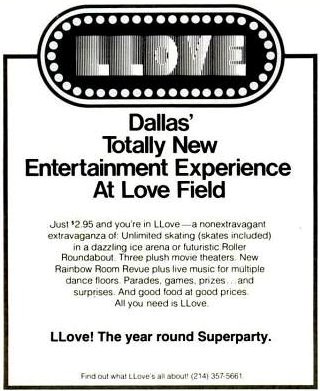 One of the few (I should say two) visual images I found was this ad that refers to LLOVE as “The year round Superparty.”

LLOVE was a party from the second you walked through the front entrance.  As you entered the main door of the Terminal, you were treated to disco music as you paid your admission ($3 or so) at the ticket booth.  The ice skating rink filled the cavernous main terminal lobby.  It was HUGE, totally covering the historic map of the world on the floor (which has been restored).   The Zamboni was housed in the back of the Lobby, where the 1960s-era barbershop was.  To the left of the ice rink, where our ticket counter was until recently, was a three-screen movie theatre.  Awesome second-tier movies … I remember watching The Way We Were, and every female in my high-school class sobbed in unison!  (Yes, it’s tear-jerker!)

Upstairs, above what is now the new security checkpoint, was The Grill snack bar and the dance hot-spot—the Rainbow Room.  Teenagers in platform shoes and Farrah Fawcett hairdos danced the night away!  “Boogie Fever … I think it’s going around…”

Back on the lobby level, to the right of the ice skating rink was the Arcade, with pinball machines and arcade games like Ski-Ball and Whack-A-Mole.  Just past that, where the new ticketing hall is now, was the roller-skating rink.  It had a HUGE mirrored ball over the middle of the rink, and the flashing lights and smoke machines all combined to make this a 70’s disco teenager’s dream-come-true.  Queue the Johnnie Taylor song “Disco Lady,” and let’s all Couples Dance!

By 1978, LLOVE had closed.  The City of Dallas didn’t make any money off the venture, so it was terminated, although a whole bunch of us had a heck of good time while it was open.  In the end, LLOVE was a totally bizarre, yet wonderful, footnote in Dallas Love Field’s evolution.  My disco memories of life in platform shoes and leisure suits may not be pretty, but LLOVE won’t be forgotten.  Perhaps the coolest thing is that where LLOVE was, the new LOVE is emerging. 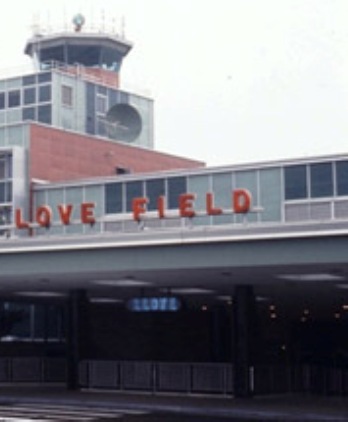 Here’s the only other photo that we have (it ran in a previous Flashback), followed by a great shot of the “new face” of Love. 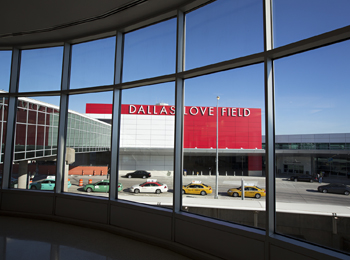 Less than a month from now the new Love Field concourse will be born!  Updates to follow folks—we have a new LOVE awaiting us.  Have a great week.
214 Loves
2 Comments

snoopy75
Not applicable
This article - and my reading it - is a great coincidence. I am a huge Southwest fan and just last night met a neighbor who is one of your pilots. I asked him how long he'd been with Southwest and he said about 29 years. I told him about LLOVE and that my now husband and I ice skated there on one of our first dates - probably in 1976. I have yet to meet one person who remembers LLOVE. Recently, someone said I was making it up. I wish I had a picture but I don't. If I ever run across one, I will get it to you, though. Enjoyed the article.
4 Loves

elizabeth_stern
Not applicable
I have photos. I have swag. I was there all the time during the summer of 1977. As a figure skater, it was some of the only available ice that summer. I was actually on the rink when they announced Elvis had died. LLOVED it!!!
2 Loves