Employee
Some of our most recognizable television spots from the past have tied into our favorite sport, and in some cases, the big game itself.  And providing friendly, reliable, low-cost travel to games around the country is something our Customers have counted on Southwest for since just a couple years after the first game was played. In 2006, we even offered a lucky Customer and ten of their best friends the trip of a lifetime to see it in person. 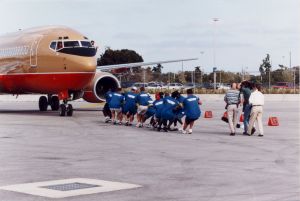 In 1999, our Fort Lauderdale Station hosted a plane “Pro Tow” which featured more than 20 NFL players in town for Super Bowl XXXIII at Pro Player Stadium.  Two Teams composed of both players and Employees competed to see who could pull a 737-700 50 feet in the quickest time.  Big Brothers/Big Sisters was the beneficiary of the Blue Team’s win, and was presented with a giant check for $2,500.00. 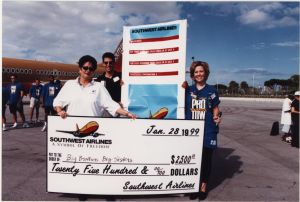 In recognition of our 10th year of NFL sponsorship, and also being the Official Airline of the Super Bowl, a chance to win a trip to Super Bowl XLI when it returned to South Florida eight years later.  The lucky winner would go on to see the Colts topple the Bears by 12 points, but also have the chance to meet NFL players and celebrities such as ESPN’s Chris Berman. 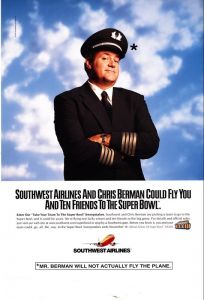 We’ve also brought a little of our LUV for the sport onboard over the years.  Several of our inflight products, like our legendary stir sticks and cocktail napkins, showed off our passion for pigskin. 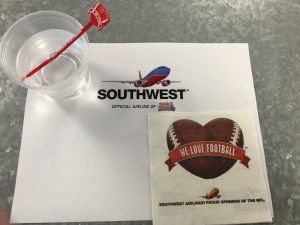 This year we’ve added even more nonstop flights into Phoenix for the big game.  Be sure to check out Mark Milligan’s post from last week about the FUN Network Planning had when scheduling this year’s extra segments.

Does the force of De Icing fluid damage the engine pylon?