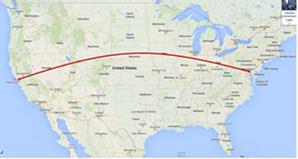 Based on our original establishment as a shorthaul, high frequency, intrastate airline, most of our flights in our first 25 years of service were usually no more than an hour or two long, which fit perfectly within the capabilities of our 737-200s and -300s.  As the launch Customer for Boeing’s -700 series aircraft, an opportunity presented itself to take our average trip length of 425 miles a little further with the longer range capabilities of the next generation fleet. On Thanksgiving Day of 1998, an experiment took place to see just what a flight might look like that took Customers from one side of the United States to the other.  Coast to coast, or transcontinental, flying fit well within the capabilities of our new -700s but was something new to many aspects of our operations.  Basic logistical questions, such as where all the trash might be stowed, needed to be answered. 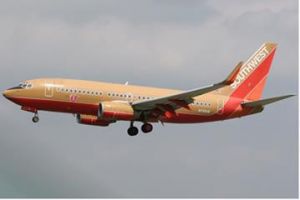 The first transcontinental flight took place between Oakland and Baltimore aboard aircraft 719, one of the newest aircraft in the fleet at the time.  It departed just after 7:00 a.m., and like many early morning flights, most Customers grabbed a few extra minutes of shut-eye for the first portion of the flight.  A return voyage back to Oakland followed, with the afternoon and evening travelers participating in several onboard activities that even included a poem writing competition, with the winning entry bringing some to tears when read over the PA system later in the trip.

Our first transcontinental dispatch release
After each leg of the trip, Customers were offered the chance to take a brief survey about their experience, which were collected by our friend Bill Owen from Network Planning who was onboard to study how things went.  They were then rewarded with their choice of Wild Turkey or a smoked turkey as a thank you for taking part in what was then the longest revenue flight in our Company’s history.  The experiment didn’t go unnoticed by the completion, either—when tidying up the cabin after the trip, a business card from our friends on the other side of the Metroplex was found in one of the seats.

With the demands of the industry and traveling public evolving over the past decade, so has our service.  While we still offer our legendary “golden triangle” flights between the first three dots on the route map, the average trip length has almost doubled.  Multiple daily trips between cities such as Baltimore and Los Angeles are now the norm.  And when the 737 MAX joins the Southwest family in 2017, we’ll once again revolutionize the industry with even greater capabilities, such as retaining operational compatibilities that allow us to keep costs low by maintaining a single aircraft type, while still offering our Employees and Customers alike a comfortable and enjoyable travel experience.
5 Loves