After the merger with AirTran was announced, two of their cities took on special interest for me because I worked in both Atlanta (ATL) and Dayton (DAY) for Delta.  I wrote about ATL before AirTran a while back, and today, it’s DAY’s turn.   Dayton lays legitimate claim to being the birthplace of aviation because, even though the Wright’s first flight was in North Carolina, Orville and Wilbur designed and built their Flyer at their Dayton bicycle shop.  Today, the nearby Wright-Patterson Air Force Base houses the amazing Air Force Museum, one of the absolute best air museums in the world and a “must-see” for any aviation geek. (The photo above is the restored Continental DC-3 at DAY.)

Unfortunately, the DAY Airport north of the city has lacked that kind of prominence.  During the 1960s and 1970s, Delta had a large operation that even included the L-1011 TriStar.  In fact, Delta had looked at making DAY their Mid West hub, but its lack of freeway access at the time caused the hub to go to the Cincinnati Airport in Northern Kentucky.  Later, Piedmont had a Dayton hub, complete with a reservation center.  This later became a US Air hub after the two airlines merged.  After the merger, US Air had too many hubs in the same general geographic area, so DAY was reduced.  Emery Worldwide built a large freight hub at DAY, utilizing DC-8s of almost every model, and it was one of the world’s largest air freight facilities at the time.  Unfortunately, Emery shut down in December 2001.  In recent years, AirTran has made its mark in DAY, and currently they operate five daily Atlanta nonstops, three nonstops to Baltimore/Washington and an Orlando nonstop.  But this post is designed to show what came before, and the photos below are a slice of daily life at DAY in 1994. 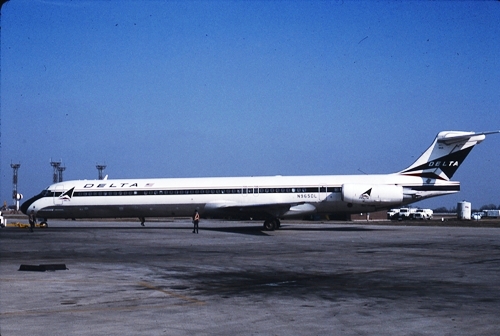 We start with Delta, since they are one of the longest serving airlines at the airport.  At the time I was there, we had five daily flights to ATL (four nonstops and a one-stopper at Louisville).  All the flights were operated by MD-88s.  We had a vintage air conditioning truck from the early 1950s that was built on a Ford chassis and had a diesel engine the equal of a railroad locomotive to run the heat and air conditioning unit.  It’s interesting to note that once AirTran began serving DAY, Delta upgraded their flights to Boeing 757s.  With their current schedule, they are back to five MD-80s a day to ATL—all nonstop this time. 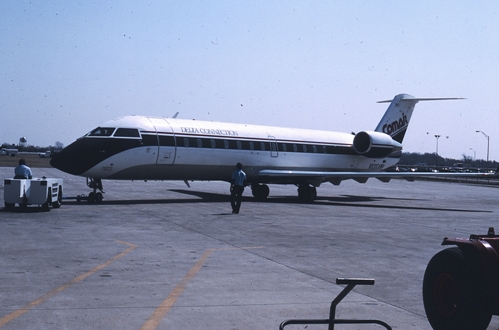 The other Delta presence at DAY was Comair, and they flew a mix of SAAB 340s, Embraer 120s, and Canadair RJs like the one above.  Comair and Delta flew out of the B Concourse.  Delta originally had their own concourse with six gates, but they moved from the D Concourse to former TWA gates on B. 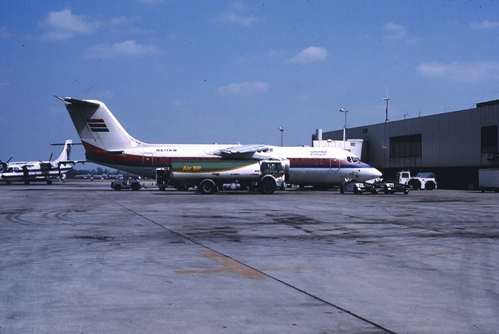 TWA operated out of B next to us with 727 nonstops to St. Louis, and I was amazed that the most junior TWA employee had 32 years of service and could only work part time.  In 1968, TWA had nonstops from DAY to JFK in New York, Los Angeles, Chicago, Louisville, and Indianapolis.  American operated Fokker 100 service to DFW off this concourse, and the rest of the gates were used by commuter carriers.  Above is an Air Wisconsin BAe-146 operating a flight for United. 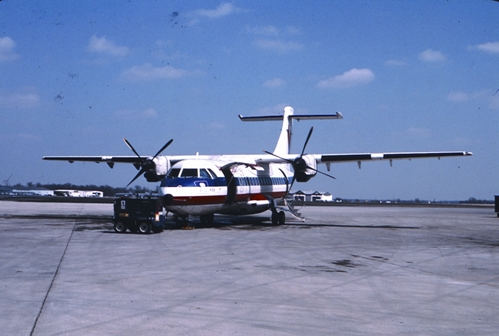 Simmons Airlines operated ATR-42s for American to Chicago O’Hare (above), and Chicago Express operated BAe Jetstream 31s for ATA Airlines to Chicago Midway from the B Concourse. 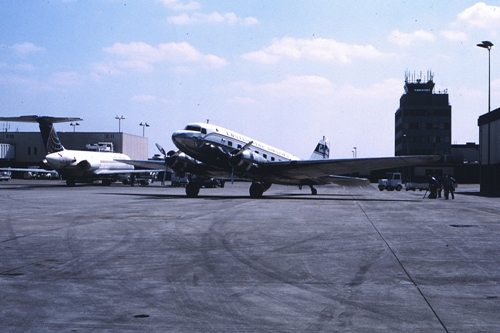 US Air (they hadn’t become US Airways yet) used the B Concourse, but they were soon joined by DAY’s first low-cost carrier, Continental Lite, with service to Cleveland and Greensboro, North Carolina.  To kick off the service, Continental brought their immaculately restored DC-3 to DAY.  Above is the DC-3, with a DC-9 parked to the left on the C Concourse, and the former Delta D Concourse is to the right.  In the background is the old tower on top of the terminal building.

For an aviation geek airline Employee, one of the great things about working in DAY (besides the close proximity to the Air Force Museum) is the annual Dayton Air Show, held at the airport.  One runway is devoted to the show with exhibits lined up next to it.  Also a bit unusual was the annual Grand American World Trap Shooting Championships held on the south edge of the airport.  It was a bit disconcerting to be on the ramp and hear a constant volley of shotguns.  The championships moved to Illinois a few years back, but the range is still there.