As I have mentioned in other Flashback Fridays, photos from our early days in Houston are kind of rare, although I have been fortunate enough to uncover more material as I dig deeper through our archives.  This week we don’t have any creepy characters in fur costumes, but we have uncovered some important events in the relationship between Southwest and Houston. 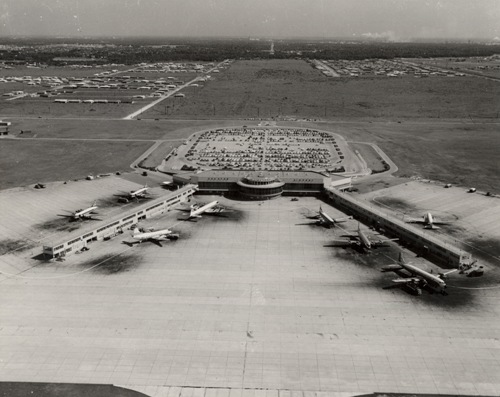 Before we look at them, I found this earlier photo in our files from the mid-1950s when Hobby was known as Houston International Airport.  Before we get to the important stuff like the aircraft, look to the top of the photo (north) and notice how barren the landscape is at this point.  Ironically, the road that rings the parking lot in the photo above is still in use and can be seen on current satellite photos.  Now let’s take a look at some of the unique aircraft.  Notice the TWA Martin 404 at the bottom position on the inside left concourse.  TWA didn’t serve Houston until after deregulation, but their airplane dates this photo to after January, 1955.  So what’s going on?  Back in the 1950s, airlines would create interchange service, kind of like today’s codeshares, but with a difference.  Interchanges filled in service gaps on airline maps.  Until the early 1960s, there was no one airline service between points like Miami, Atlanta, Houston, or Dallas and the West Coast and Pacific Northwest, so the age of the interchange was born.  American formed separate interchanges with Continental and Delta over Dallas and El Paso to California, and Braniff and Continental formed interchanges with United to Portland and Seattle over Denver.  One airline would operate a flight along its route, then turn the airplane over to another carrier in the interchange city.  A Delta crew would fly a DC-6 from Atlanta to Dallas (or Fort Worth), and an American crew would pick up the aircraft and take it to Los Angeles.  The TWA aircraft in the picture represents the only California interchange to avoid American with the aircraft operating on Braniff from Houston to Dallas to Amarillo.  There, it was turned over to TWA who flew it from Amarillo to Albuquerque and California.  And speaking of American, Continental has one of American’s DC-6s parked immediately to the right of the TWA airplane.  It would operate via Continental route to San Antonio, and El Paso, and then American would fly it to California from El Paso.  Other aircraft in the photo include Braniff Convair 340s and a Braniff DC-7C on the left concourse, and an Eastern DC-7B, a Delta Convair 440 and a Continental DC-3 on the right.  If folks are interested, we can look at interchanges with more depth in a future edition. 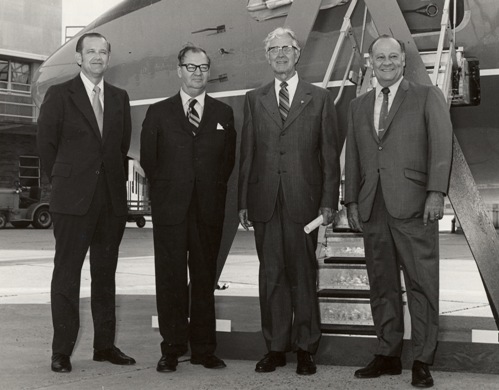 Houston is an original city, but Hobby isn’t an original airport.  We began our service to Houston on June 18, 1971 at Houston Intercontinental.  We opened Hobby on November 14, 1971, along with beginning service between Hobby and San Antonio, and we temporarily eliminated Saturday service on the same day.  These gentlemen standing in front of the first Hobby departure are (L to R) Bill Rosene, Assistant Airport Manager, Joe Foster, Director of Aviation, Pat Koonce, Airport Manager, and City Councilman Frank Mancuso.  On May 14, 1972, we moved all Houston service to Hobby. 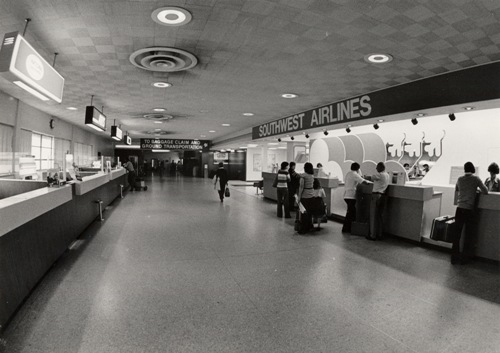 Our initial Hobby service operated out of the old International Arrivals building. We finally moved into the traditional terminal on December 8, 1974.  No date is noted on the photo, but the counter backdrop is typical of the late 70s.  One thing is for sure, there no crowds to make walking through the building difficult.  Check out the ashtrays on the right next to the rental car counters. 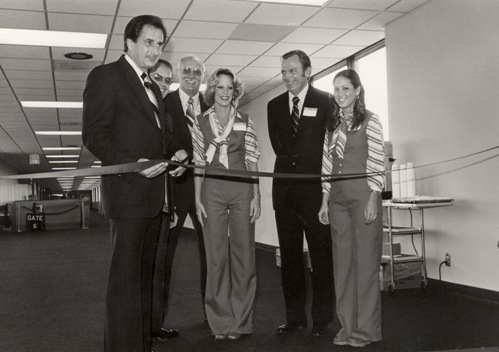 At the same time we moved into the main building at Hobby, we opened two new gates that were equipped with jetbridges.  As our presence grew in Hobby and we began interstate flights in 1979 to New Orleans, we added to our gate totals.  This photo was taken on October 2 sometime between 1978 and 1982 because Howard Putnam was President during that time.  I can’t pin down the exact year.  This ribbon cutting marks the opening of three additional gates at Hobby, and looking on (L-R) are Director of Facilities Tom Hoff, Howard, Vice President Ground Operations Bill Franklin, Ticket Agent Barbara Trncak, Herb, and Ticket Agent Carol Zinnante.

My list of “missing” images still includes views of the inside of our original gates on the North Concourse (and the original Ticket Counter) at Love Field and any views of our original operation at Intercontinental in 1971 and 1972.  Hopefully, I will find some.

James_Sullivan
Not applicable
Great post! Flashback Fridays are one of the best parts of the blog. I had been wondering at what point in the 1970s Southwest moved upstairs to the main terminal at HOU. I remember the "hearts and planes" wall decorations of the late 1970s - they were still very visible at Love Field through until about 1990 or so. I hope you're able to find some of the photos you're looking for - definitely interested in seeing them myself. Nice work again!
20 Loves