Flashback Fridays: Early Onboard Love and an Extra Treat for Avgeeks

This week, we have photos that take us back to the start of a longtime Southwest Airlines tradition, and as a bonus, they also show us the interior of one of our three original aircraft.  Like so many other of the recent Flashback Fridays installments, this week’s post uses uncut roles of negatives that I recently found. 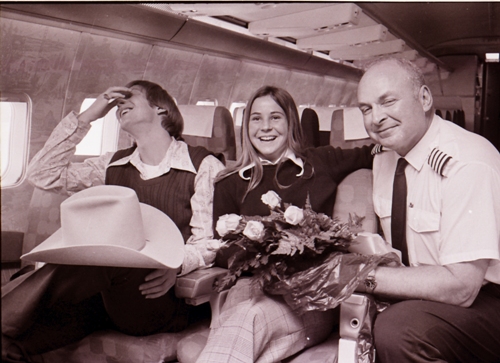 We’ve heard hundreds of stories of couples who found love on the LUV Airline.  Meeting a future mate is an overlooked but significant (if you are one of the couples involved) byproduct of our open-seating boarding method.  I don’t know where the couple in these photographs met, but it is obvious that they have a close relationship and that Southwest plays a role in that relationship.  Unfortunately, the details of this scene have been long lost to history, so we can only guess at what is happening.  Our Captain, Roger Benjamin, (fondly known as “Captain Ben” to our Flight Attendants) has presented the couple with roses.  From the smug look on Captain Ben’s face, he has said something that “hit home” with the man and woman.  The couple's expressions are priceless, and if the photo was in color, no doubt we would be looking at faces red with good-natured kidding.  Scenes like this have been repeated frequently on Southwest over the years. 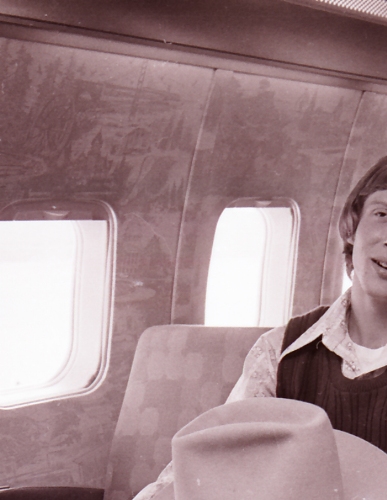 Not only do these photos illustrate the beginnings of one of our traditions, they take us inside one of our original three aircraft, in this case, N22SW (C/N 20336).  How can we tell which specific aircraft?  Fortunately, the distinctive side wall panels with California scenes help the identification process.  Two of our three original aircraft were intended for the two California intrastate airlines, PSA and Air California.  (The third was for Aloha.)  The ex-PSA aircraft was N20SW (C/N 20369), and it was the aircraft we had to sell after we had acquired a fourth aircraft (N23SW) in late 1971.  Since almost all of the other negatives in the box were from 1973, that would seem to eliminate this being a photo of N20SW.  Even though both N20SW and N22SW (the ex-Air California aircraft) had California-themed sidewalls, the designs were different.  The sidewall in the picture above features the Golden Gate Bridge, San Francisco cable cars, and the California Capitol Building in Sacramento, and along with the darker background on the walls, this identifies it as N22SW, the Air California airplane.  The PSA aircraft’s sidewalls were lighter, and they included views of the landmark Theme Building at Los Angeles International and a movie set representing Burbank—Air California flew to neither location at the time.  So, based on the date of the photo and the illustrations, we can say this is N22SW. 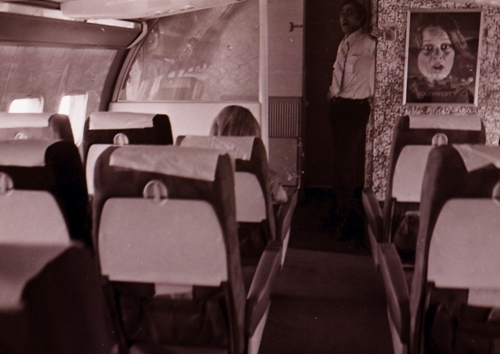 Next, we have a view of the forward cabin of N22SW during flight (above).  Fortunately, our load factors are a lot better these days.  Note the clear glass wind screen on the left that kept the wind from blowing through the open door into the cabin.  To say that the design of the forward bulkhead is “busy” would be an understatement.  The Flight Attendant poster on the wall further dates this as 1973 or 1974 because it was during this time frame that these posters were featured at our ticket counters.  (Still another clue that the aircraft is N22SW.) 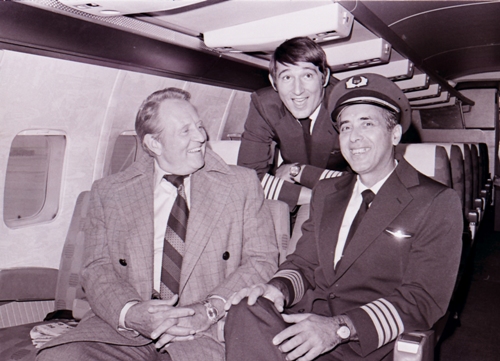 Although the photo above of television personality Art Linkletter, who was on his way to Houston to address the American Motivational Association, and Captains Raul Cabeza and Sam Cohn is from a different roll of negatives, I include it here because it was also taken onboard N22SW during late 1973.  Mr. Linkletter and Captain Cabeza are sitting in a row at the mid-cabin lounge (a favorite spot for photos like these).  Note that the backs of their chairs are a lot shorter than the rest of the seats.  This view also gives us a good look at the original Boeing style of passenger service units (PSUs) that dated to the 707 and the open overhead shelf.  Only hats and coats could be placed in the overhead space on these aircraft.  In a way it’s ironic that two of our three first airplanes had interiors that reflected California.  I like to think this was an omen that we would eventually be the top carrier within the Golden State.

Like so many other frozen moments in time, these photos help define our past, and they shape our future.  In the stories of Southwest’s past, we see the development of Southwest’s present, and the framework of Southwest’s future.  If there’s one thing I hope this series of posts can accomplish, it is to raise the awareness that, 40 years from now, a new generation will be looking at us, hopefully with the same respect that we show those who came before.  We write our history every day with what we do.