This time of year could be called “list season.”  I have to admit that I am a list junkie, and I devour any “best of” (or better yet, “worst of”) list relating to a subject in which I am interested, and I don’t think I’m alone.  Why are we so interested in lists?  My take is that they give us a chance to compare our judgment with those of others.  So here’s your opportunity to match wits with me, and I am sharing my five favorite photos from the last year’s Flashback Fridays.  I tried to pick photos that showcase some long forgotten, but important, milestones that either show an early important aspect of, or had a profound effect on, our operation and our Culture.  The choices and rankings are my own, so if you agree, you are a genius, and if you disagree, I’m sure you will let me know. 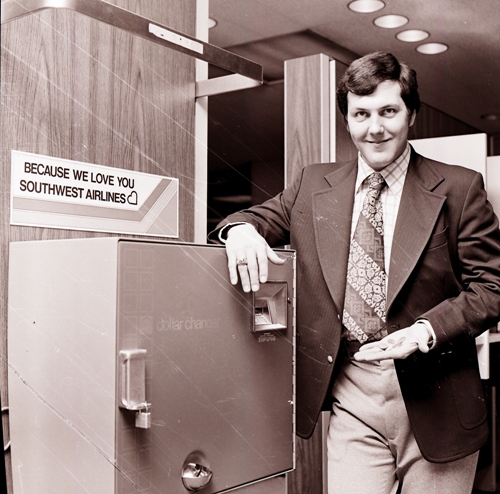 Number five:  As far as having a lasting effect on our Company, the subject of this photo isn’t that significant.  However, the photo from the August 17 Flashback Fridays is a great illustration of our early corporate Warrior Spirit, and it shows the creativity and spunk that were required to fight not only the other airlines, but the new DFW Regional Airport.  (It’s called DFW International now.)  In its early days, DFW charged folks a quarter to ride the automated trains between terminals.  Coin changers were installed in each terminal’s two or three stations, but the changers only returned 95 cents in change.  The airport claimed the fee offset the cost of the changers.  Admittedly, the need for change was less at Love Field, but sensing the opportunity to make a point in the long-running battle over the continued use of Love, Southwest installed some coin changers of their own.  In my original post, I had written that the Southwest changers returned a full dollar, but I later found out that our changers actually paid out $1.05 in change.  The sign above the machine reveals the reason for paying our Customers to use the machine:  “Because we love you.” 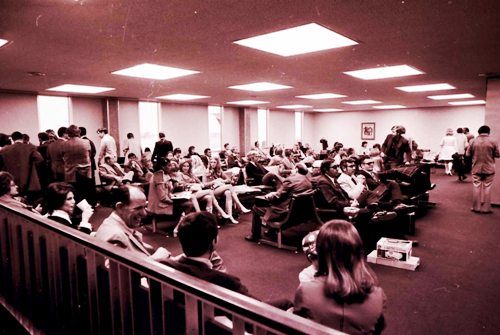 Number four:  Photos of our operation on the old North Concourse at Love Field are as rare as hen’s teeth, especially photos from inside the gate areas.  After all, the North Concourse was literally where Southwest began operation on the morning of June 18, 1971, so there is a definite historical importance.  A few photos have been published of the checkin podiums, primarily in conjunction with the “Great $13 Fare War,” but I hadn’t found any photos of the actual gate areas (Gates 23 and 25, subleased from Delta).  That was true until the June 1 Flashback Fridays.  This photo is one of the very few I have ever seen inside the gate area at the old concourse, and we see the North Concourse’s characteristic narrow vertical windows and the Delta gate furnishings, including the railing separating the jetbridge entrance from the room.  The irony is that, while these early views are so rare, thousands of Southwest Employees would later attend University for People classes in this very same room. 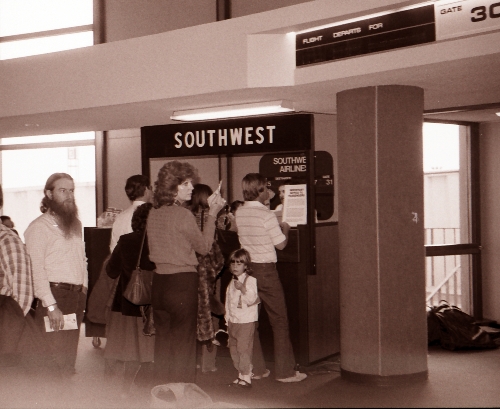 Number three:  When Southwest began service to Los Angeles on September 18, 1982 (30 years to the day after I was born), we operated out of TWA’s Terminal Three, until our current facility, Terminal One, opened two years later.  Photos of our Terminal Three operation may be even rarer than those from Love Field’s North Concourse.  For the February 10 Flashback, I found some photos taken inside the Terminal Three satellite.  This photo shows passengers checking in at the Gate 30 podium.  Other than the rarity of the photo, I’ll admit that I included it on the list for some arbitrary personal reasons:  This was the terminal used for the filming of the classic movie Airplane; LAX was one of my two childhood airports; and we began service there on my birthday.  Most lists always seem to contain an item that makes you want to scratch your head, and this one may be mine. 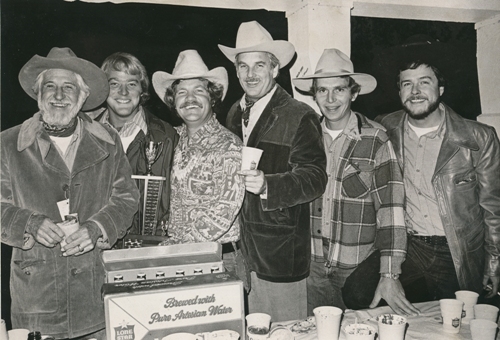 Number two:  One of our earliest and longest-lived Culture events is the annual Chili Cookoff.   In the April 27 Flashback Fridays, I published a photo of the very first cookoff from 1973.  This was officially the “First and Last Chili Cookoff” because the Company’s financial situation was so “iffy,” and it was far from certain that Southwest would be around for a second cookoff.  That tradition has carried over to each successive cookoff, and the one held in 2012 was the “39th and Last Annual Chili Cookoff.”  In that original post, I wrote:  “Southwest Cofounder Rollin King was one of the judges, and he is in the middle with the white hat and dark jacket.  To his left sharing the winning trophy are Provisioning Employees Ken Hargrove (our current Amarillo Station Leader) and Steve Spurrier (no, not the head football coach at South Carolina) to Ken’s left.  On the far left is another judge, Hondo Crouch, the “Ambassador from Luckenbach, Texas.”  Hondo, who passed away in 1976, was a Texas legend, and he also went by the self-proclaimed titles of “Mayor of Luckenbach” and the “Crown Prince of Luckenbach.”  To Rollin’s right are two more judges, Charlie and Gordon Fowler, sons of Texas chili legend, Wick Fowler.  Take a look at the case of long necked Lone Star beer on the table.  I doubt if those bottles in the carton will still be full when the night is done.”  Because of its importance to our Culture, this photo earns the penultimate position on the list. 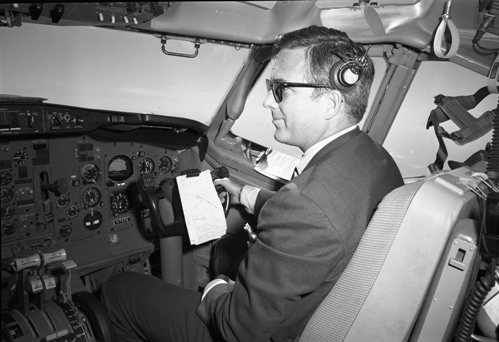 And, my most favorite Flashback Friday’s photo from 2012:  This photo from the January 10 Flashback earns the top ranking.  In fact, it may be the very first Southwest Airlines photo, and I am proud of the detective work it took to discover the story behind the photo.  Knowing that Rollin King flew the line as a Pilot during Southwest’s earliest days, I thought at first that this was a photo taken during that period.  However, the fact that he is in a suit and not a uniform got me to wondering.  I blew up the image of the instrument panel (at the top of the page) to see if I could find the registration placard, and it was N737Q—not a Southwest airplane.  I did some research and found that this was a Boeing demonstrator, but what were the circumstances of the flight?  Mike Lombardi, Boeing’s Corporate Historian, filled in the gaps.  The photo was taken on a June 17, 1968, demonstration flight between Dallas and San Antonio.  This was only 15 months after Air Southwest was incorporated and three years and one day before Southwest’s first flight on June 18, 1971.  It was also just seven months after the first 737 was delivered to Lufthansa.  This photo represents the founding of Southwest, the start of a long, mutually rewarding and exclusive relationship with Boeing, and the birth of one of the most successful airliner programs in aviation history.  In my book, three excellent qualifications for the number one spot on my top five list.