I think that this “Best of” Flashback Fridays, which originally ran on July 13, 2012, is the perfect pick for this week, but that doesn’t mean it was an easy choice to make.

I must admit that it was always one of my favorites, since Brian shared not only his ever-present knowledge of airports and airplanes, but also, in this one, his personal memories of his Dad.  It’s clear where Brian’s love and fascination with the aviation industry began, and I cannot help but think how incredibly proud his Dad would have been this week to see Brian’s family, friends, and over a hundred Southwest Employees turn out for his memorial service.


As regular readers know, I can thank my father, David, for a lot of my “avgeekness.”  I hope you will forgive this somewhat personal post, but I think that my dad’s career may offer some lessons about this crazy industry.  Dad would have been 88 a few days ago.  He was born, the youngest of eight, near Stamford in West Texas in 1924 to a sharecropper cotton farmer.  His father was born in 1879 in Alabama and moved west for never-discussed reasons, and his mother was the daughter of a Baptist minister who used to ride his circuit on a mule.  Airplanes over his part of Texas were a rarity for Dad growing up in the 20s and 30s, but when World War II came, he saw the airplane as a way out of dry-land farming.  He was a B-17 aircraft commander, but Victory-Europe Day kept his unit in the states.  (The Pacific Theater needed B-29 crews, and the war was over before he could be retrained.)  Leaving the service, he wanted to stay in aviation (and away from Stamford, Texas), but not as a pilot.  He joined a small airline called ESSAIR (an acronym that stood for Efficiency, Safety, and Speed by AIR) in Lubbock.  Shortly after that, the airline changed its name to Pioneer.  This was the first new certificated airline to begin service since the early 1930s, and it has a lot of interesting parallels with Southwest, which I will cover in a later blog post. 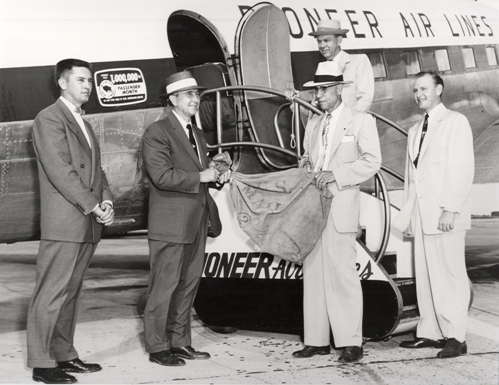 By the time the photo above was taken in 1954 at Amarillo, Dad had moved up the ladder from Agent in Lubbock, to Station Manager in Big Spring, Texas, Clovis, New Mexico (where I was born), and had just moved to Amarillo.  Continental would buy out Pioneer the next year.  Dad is the man at the left of the photo with the Postmaster celebrating a landmark event.  The airplane is a former United Airlines DC-3 with the right-hand door—note the “1,000,000th Passenger Month” sticker next to the door.  I was only two at the time, but as I got older, I would go to work with Dad in the summer, and sit on a bag tug watching the airplanes at the old Amarillo Terminal.  From Amarillo, his career would take him to Los Angeles as a Director Passenger Service (DPS) flying onboard Continental’s new 707s and 720Bs as a management representative/concierge, and I took my first jet flight (on a Continental Boeing 720B) in 1962 from LAX to El Paso.  Our house was maybe five blocks from the southern edge of LAX, and from that point on, I lived and breathed airplanes—especially airliners.  This was the period of transition from the great prop liners like the DC-7 and Constellation to the early 707s and DC-8s, and they all flew out of LAX.  Dad was soon promoted to be in charge of Continental’s ticket counter at LAX, but I didn’t have the freedom to go to work with him like in Amarillo.  However, I only had to look out my front door to see a constant parade of aircraft taking off. 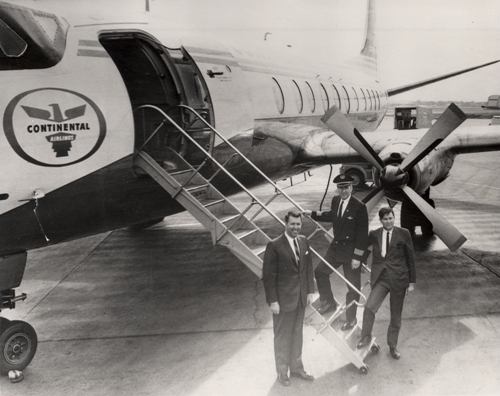 In 1967, we moved to Dallas when Dad became the Continental’s last Station Manager at Love Field, and shortly afterward, Continental operated its last Viscount flight out of Dallas.  That’s Dad to the right of the photo.  Luckily, Love Field had a great observation deck, and once again, I could spend whole days at the airport in summer. 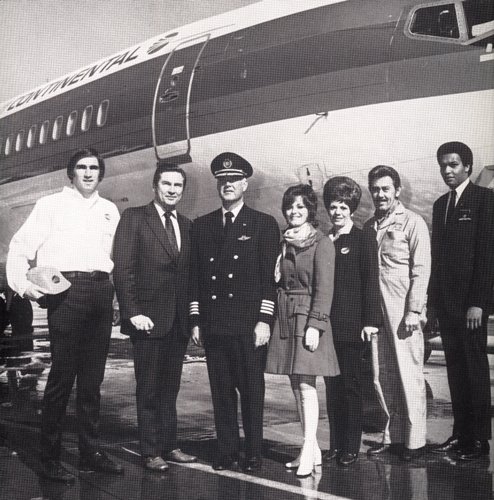 In this later photo, Dad (second from left) is part of a Continental ad featuring Dallas employees.  The date is about 1972, and it’s hard for me to believe, but I am now 18 years older than he was in this photo.  That got me to thinking about the tremendous changes both of us experienced during our airline careers.  My father started in the DC-3 era and when he finished, the 747 and 737 had begun flying the airways.  My 36-year career overlaps some of Dad’s, as when I started with Delta, they were still flying DC-8s, had introduced DC-9s and 747s, and were taking delivery of new 727s and L-1011s.  Dad and I both saw the last days of airline regulation and the rise of airlines like Southwest.  Since then, I’ve seen those new 727s and L-1011s sent off to the scrap yards, along with early model 737s and even some 757s and 767s.  Douglas and Lockheed are now names for the history book, and even though the 737 and 747 are still in production, today’s airplanes only bear a physical resemblance to those first examples that came onboard during my dad’s career.  It amazes me that, in just three generations of Lusk men, we have moved from the last days of the open range to well into the third or fourth generation of the jet age. 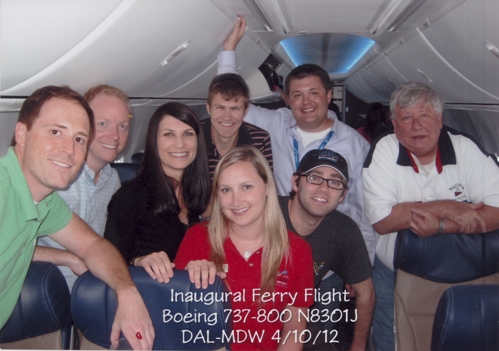 If I wasn’t already feeling old enough, I found a couple of other lessons in thinking about my dad.  Airline employees still like to take pictures in and around airplanes.  I’m the old geezer on the right.  Even more profound is that our industry is such a small world.  In writing Flashback Fridays, I have discovered other Southwest Employees whose fathers knew and worked with my dad.  That “small-worldness” applies to my own career, as I’ve run across Southwest folks who have worked in the same cities as I did with Delta or they are former Delta employees with mutual friends.  I’ve even met new Southwest Employees who were former AirTran and former Delta employees.  Recently, I attended an archives institute, and was talking with Bob, who is a volunteer archivist for the Atlanta Symphony—his day job is a Dispatcher with Delta.  It seems that, unbeknownst to each of us, we shared an Atlanta break room back in 1979.  Over 30 years later, our paths reconnected.  My dad had similar instances, and those of you just starting your careers will have similar “old man” tales to tell in the future.  Yes, this has always been an amazing industry.  In spite of all the challenges we face, it still is--especially when you can work for a Company like Southwest.